Inside an 18,000-square-foot industrial building in Downey where space capsule parts were once manufactured, hundreds of thousands of prawns swim in long, hand-built tanks.

Long Beach resident Steve Sutton, 36, founded TransparentSea Farm near the start of the pandemic 18 months ago. A former fisherman-turned aquaculturist, he leased the vacant warehouse with big plans to change the way the public consumes crustaceans.

“In terms of romance, the average person doesn’t want to know that their shrimp came from a warehouse in Downey,” Sutton said, conceding that his surroundings are a seemingly odd fit for his business.

But the facility itself is part of Sutton’s plan to change the industry, by leasing space in underutilized areas to grow prawns indoors rather than destroying habitats, killing sea life and using chemicals to mass produce one of the world’s most popular delicacies.

At $25 a pound the price for these prawns may seem steep, but high quality and change doesn’t come cheap.

“If you want to make a change, then you have to make a profit,” he said. “If you can make a profit, then change is inevitable,” explaining that the goal is to prove both the quality and positive impact of TransparentSea Farm so others will copy his model.

His prawns are now sold in some of the trendiest, most forward-thinking and environmentally-conscious restaurants in Los Angeles, including Liv’s in Belmont Shore.

Steve Sutton has a friendly vibe and infectious excitement for prawns. He walked me under the domed roof of the cavernous warehouse. Three space-capsule-shaped cones large enough to cradle an astronaut hark back to the building’s early days during the space race of the 1960s.

Sutton explained that all of the water the farm uses is pumped through filters to remove physical matter, ammonia, and carbon dioxide, and then gets pumped through the three cones at a rate of 500 gallons a minute where oxygen, and sometimes ozone, are infused back into the water so it can be reused.

The ends of long prawn tanks flank on either side creating a corridor, each of the tanks separated by raised access platforms. 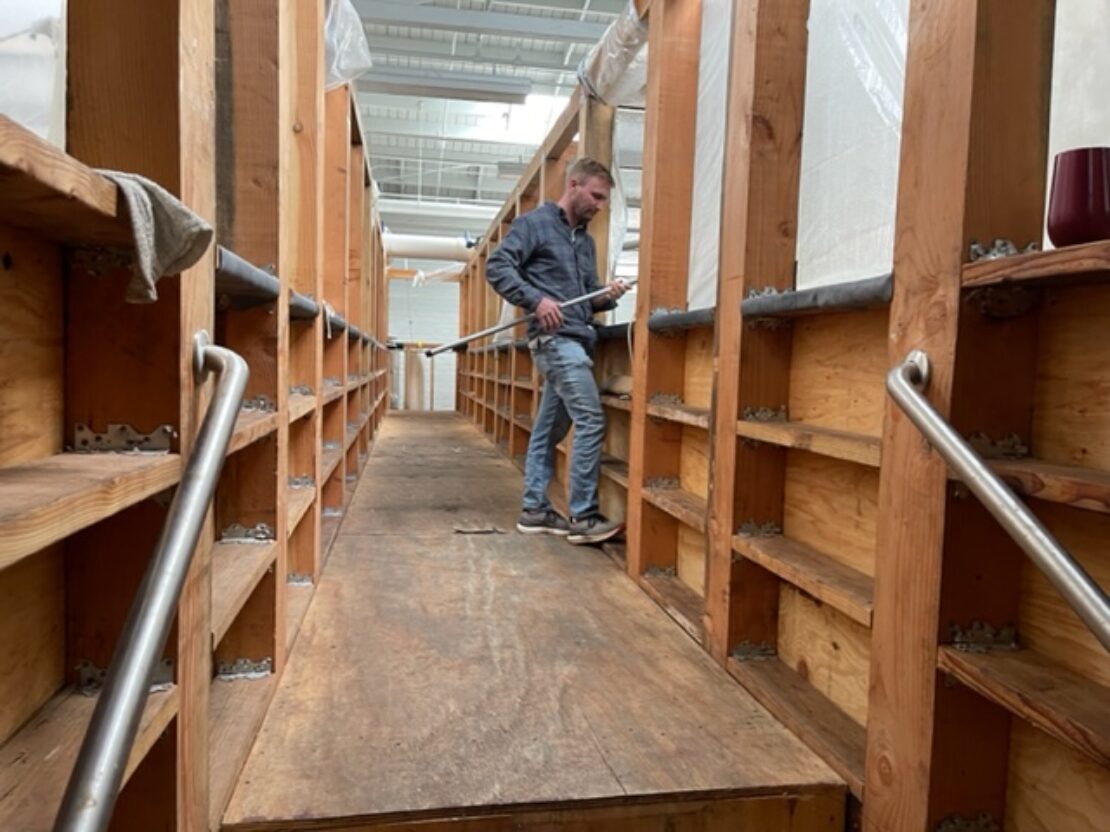 Steve Sutton, 36, walks through rows of tanks where hundreds of thousands of chemical-free prawns are raised. Photo by Matt Miller.

Sutton led me up to observe some prawns, pulling back a plastic sheet holding in moisture and releasing a sweet aroma that billowed with the damp plume of opening a steam room door.

Contrary to popular belief (thanks in part to clever marketing), prawns are actually distinct from shrimp, not only because they come from different decapod families, but because of their lifecycle.

Prawns are a quickly renewable, which is important when you consider that shrimp (as a general catch-all word) are the most consumed seafood in the country according to the National Fisheries Institute, topping out at 4.6-pounds per person in 2018 in the United States alone, with that trend in popularity continuing through 2021 according to Institute for Food Technologies.

While shrimp produce eggs that they protect until the eggs hatch, a prawn produces 15 to 20 times more eggs and broadcasts those eggs once they’ve been fertilized into the ocean. Sutton explained that while the plan is to breed prawns at the farm one day, at this point one single prawn could produce enough fertilized eggs to populate his farm two times over.

“If we’re going to be eating a lot of something, it should be something that’s more renewable,” Sutton says, explaining that the lifespan for prawns and shrimp are very different. While prawns can be harvested every four months and have about a one-year lifespan, shrimp take longer to grow and naturally live more than six years. 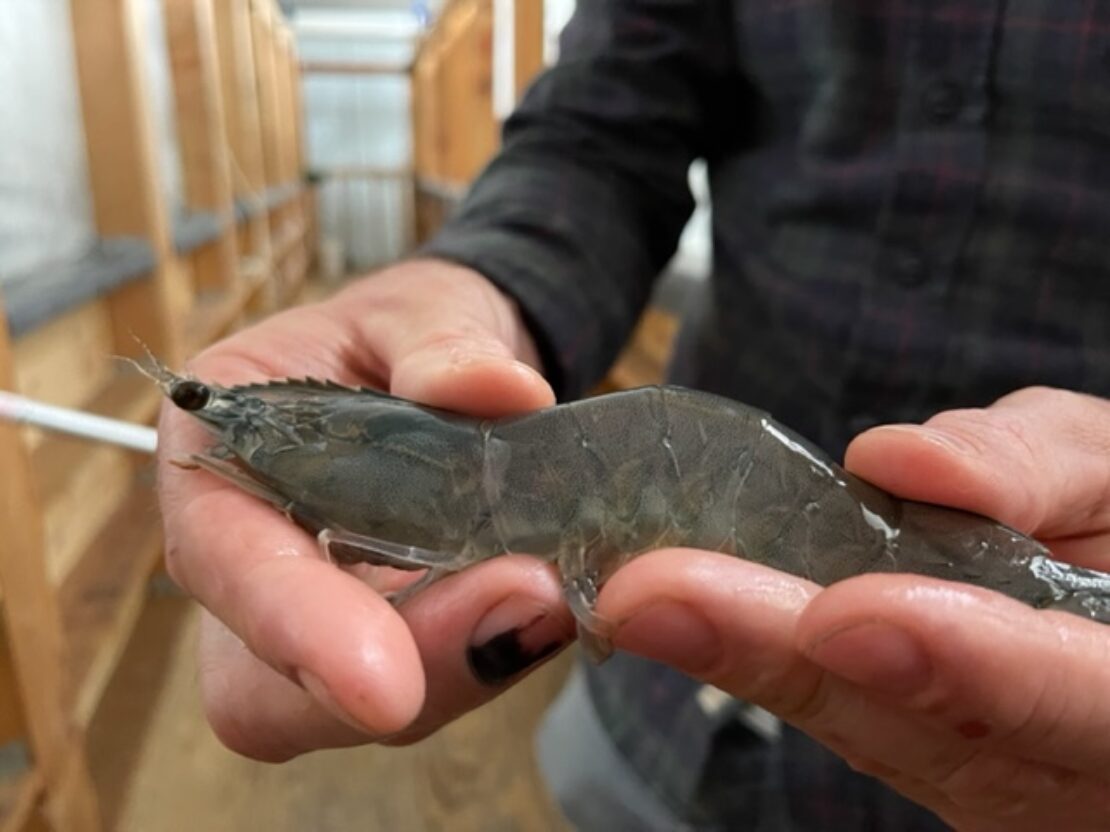 Steve Sutton, 36, holds one the chemical-free prawns he raises at a facility in Downey. Photo by Matt Miller.

Another reason models like TransparentSea Farm are so important is because of how crustaceans are harvested from the ocean.

Drift-fishing, or dragging nets along the bottom of the ocean for wild-caught shrimp results in a staggering amount of “by-catch,” or sea life that wasn’t meant to be caught and is discarded.

As much as six pounds of by-catch can be caught for every one pound of shrimp. According to a report by the Inland Ocean Coalition, 24 billion pounds of by-catch is caught annually from the shrimping industry worldwide, 98% of which is discarded.

Sutton is also quick to point out that “sustainable” shrimp farms aren’t much better; in fact, he doesn’t like the word sustainable when referring to his farm because it’s overused and has become meaningless.

“We’re not perfect, but I dare you to find anybody who is selling a chemical-free prawn or shrimp that is of this quality and has a lower carbon footprint,” he said.

He explains that there are farms with a lower carbon footprint out there, but they’re shipping their product around the world, which negates any good they’ve done, and voids the entire point of reducing a carbon footprint in the first place.

He’s referring to the practice of reclaiming converted mangroves for shrimp farming, rather than replanting new mangroves, as one of those things that shrimp farmers lay claim to as being sustainable.

“It’s a messy, inefficient, and destructive practice,” he says. Shrimp are susceptible to infections from other animals that get into the pool. If the shrimps get sick then the farmer faces losing the crop, so farmers feed their shrimps antibiotics for a few weeks and then sell.

One of Sutton’s reasons for the model to occupy unused buildings is that shrimp farms cause a lot of damage and pollution. While the tides bring water in, when the tide goes out, with it go all of the algaecides and antibiotics that are mixed in with the shrimp.

Sutton’s goal is to turn prawn farming into a science by creating a successful clear water system, which translates into more consistent, cleaner production. And if he can be successful doing that, then he can build a farm anywhere and can start using more underutilized spaces, rather than destroying more mangroves and habitats.

Commercial shrimp shipped from around the world are bathed in a solution of sodium tripolyphosphate, a versatile chemical that is commonly used in cleaning products, detergents, soaps, paints, ceramics, and of course food products like scallops and shrimp, which keeps commercially produced sea fare from becoming discolored.

One of the attributes of this chemical is that it helps the shrimp absorb water while they’re freezing, and retain that moisture as they thaw, only releasing the water once heat is applied. The outcome is the plump shrimp you thawed from your freezer shrinks considerably (by as much as 20%) making you wonder if perhaps you’ve overcooked them. This might be especially upsetting if you buy thawed raw shrimp from the fish counter at your local grocery priced by the pound.

“So you’ve got people walking around going, ‘I can’t eat shrimp, I’m allergic.’ And they actually may be allergic to the preservatives because they’re so ubiquitous.”

Part of being sustainable means feeding people locally through farmers markets, local restaurants, or through his website so there is no need for preservatives, meaning Sutton’s freshly harvested prawns may discolor within 24 hours, no different than a fresh apple browning once it’s been cut.

While Sutton plans on building out a retail store at the front of the farm where people can pick up fresh prawns and maybe even catch and cook them, for now, if you want to try these incredible, chemical-free prawns, you’ll have to either order off the TransparentSea Farm, catch him at a farmers market, or visit one of these forward-thinking restaurants , where the chefs truly understand what he’s doing, not just for the plate, but for the planet.

TransparentSea Farm prawns can regularly be found at: