Every day, they say, men at their Mexican takeout spot Break Time! in West Long Beach often comment on their young age and looks.

“When people see us in here, they think that we need to be saved or something,” Kaur said, sitting inside their pink-painted eatery. Men used to say similar things to her mother, she recalled.

In April, Kaur and Singleton officially debuted their takeout business, operating out of a unit they share with a flan factory. Kaur’s mother, 60-year-old Lina Kaur, bought the space five years ago, where she only sold doughnuts and later lottery tickets.

Lina, who’s Indian, wanted to cook and sell Indian food from the space, but there was no demand for it, according to Lina. Years later, Singleton, who’s of Mexican descent, entered the equation. And she’s a great cook—so much so that people can’t believe it, according to the three women. 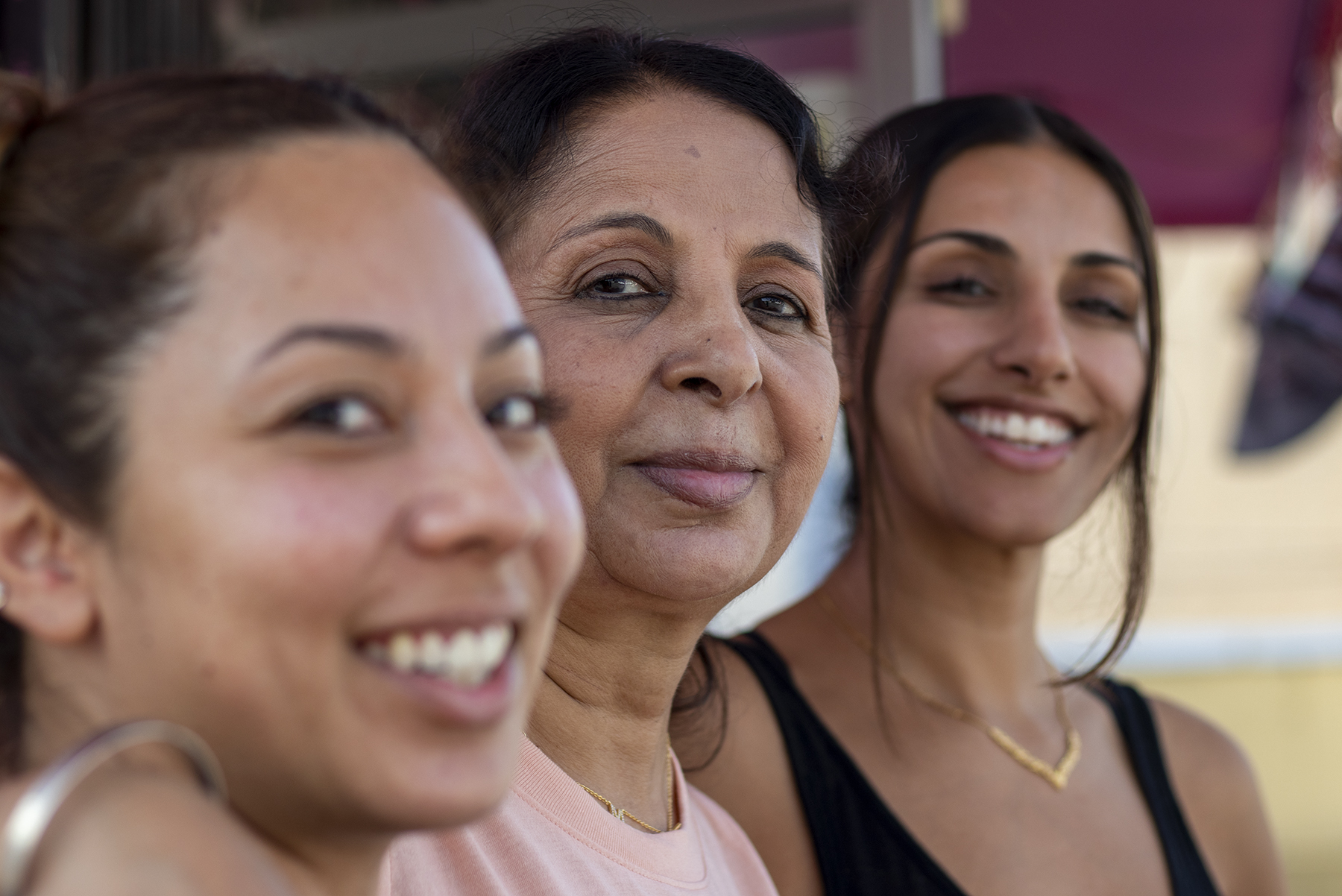 Even Singleton’s own family questioned her cooking abilities. “Now, it’s more like my hidden card. Like, ha!” she exclaimed.

While Singleton’s in charge of the recipes, Kaur handles the marketing. The two make a good team, they said.

Singleton’s food is influenced by Durango, Mexico, where her mother is from, and “remixed” by soul food from the South, where her boyfriend’s from. And you can taste it in the hints of the barbecue flavor of her meats she uses in her taquitos. With the two nationalities fused together, their food—like their vegetarian potato tacos—is full of spice, and not necessarily the hot kind.

“People say, ‘You don’t even need sauce in it,’” Singleton said. “It’s a new Mexican flavor.” 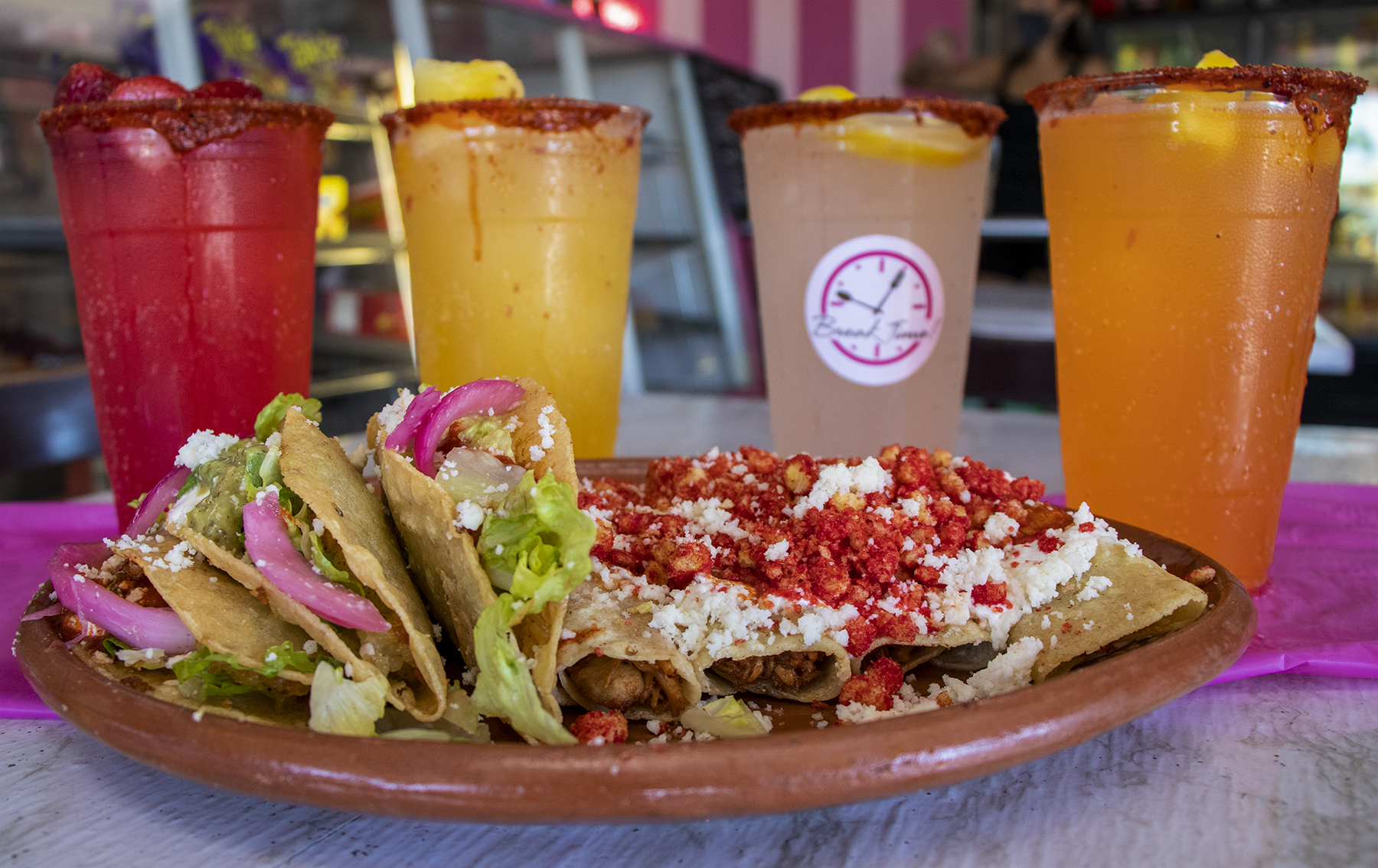 A dish of tacos dorados and Hot Cheeto taquitos sit on a table at Break Time!, a Mexican takeout business in West Long Beach, on Tuesday, Aug. 3, 2021. Photo by Crystal Niebla.

She and Kaur also experiment with items, such as drizzling a small bag of Hot Cheeto over taquitos, tajin-rimming and dropping chopped fruits in their iced Jarrito drinks, and putting an entire cheese-oozing chile relleno in a burrito.

“To make every bite a party,” is all Singleton wants, she said.

Like many great cooks, Singleton said that she has to do it with love in order for it to taste perfect. While she said it might be a superstition, she took that expression very seriously.

Singleton said she’ll never forget a time her mother asked, “‘Were you mad when you made this?’” after tasting a dish. Singleton said that if her mood isn’t positive when she cooks, “it just throws your palette off.” A dish too salty, too bitter or too spicy might be the consequence, she said. 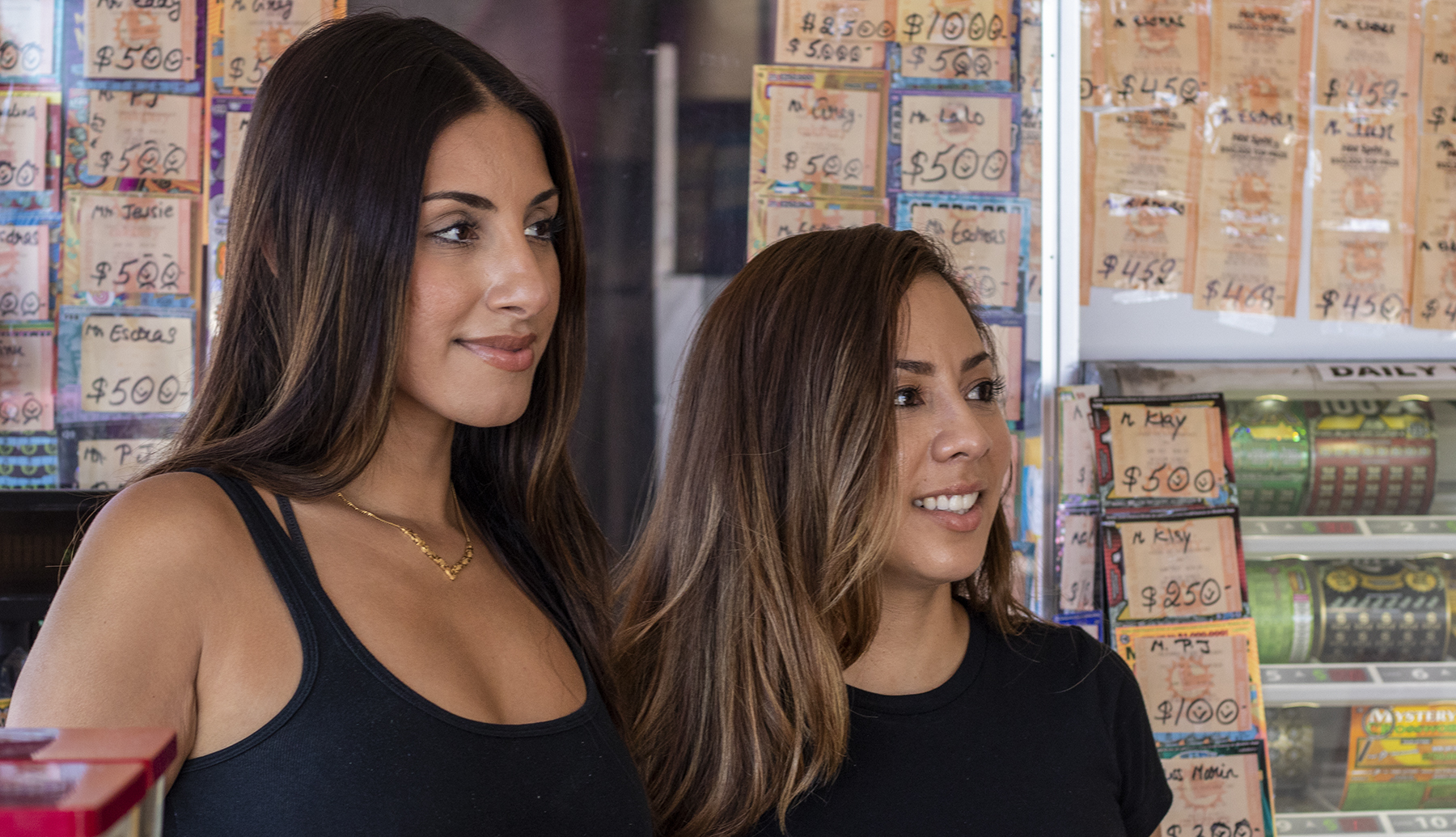 Joty Kaur, left, and Lucy Singleton, right, stand for a portrait at Break Time! in West Long Beach on Tuesday, Aug. 3, 2021. Owned by Kaur’s mother where she only sold lottery tickets and donuts, Kaur and Singleton began serving Durango- and Southern-influenced Mexican food in April 2021. Photo by Crystal Niebla.

Since launching the takeout business, Singleton changed her lifestyle. “Good vibes only,” an expression literally glowing in pink, neon lights inside the business, also became Singleton’s priority. Avoiding any stress from rushing to work, she gets up early, 6:30 a.m. to be exact. For a clear mind, she then meditates. When she finally hits the road to Long Beach in her cinnamon-colored Dodge Charger from her Canyon Country home, she drives slowly.

“I like to take my time with things,” she said.

When she finally gets to work around 9 a.m., when they start serving food, Kaur said Singleton is alway in such a happy mood.

“‘Why don’t you come in like Lucy? Lucy’s always in a great mood,’” Kaur said, giggling as she recalled her mother’s words.

Before launching the takeout business, Kaur’s father died in March from ailments related to alcoholism, which had set her back, she said. Now, she can speak more freely about it without tearing.

“It just gave me and Lucy some strength,” Kaur said. “Now, we have to make this work.”

Westside’s flan factory bounces back from pandemic with new flavors