Developers of the 42-acre San Pedro Public Market, the project taking over the area’s famed waterfront, have announced that they will push the groundbreaking to 2021 and an anticipated opening to 2022, following the continuation of the COVID pandemic.

“The ongoing public health crisis has greatly impacted our communities and the way our shared spaces will evolve,” read a statement sent by the project team to the Post. “In consideration of these circumstances, we have updated our construction timeline to an early 2021 groundbreaking. It is important to take this time to review our existing plans to ensure that they maximize the open-air nature of our site and best support the developing needs of tenants and all partners in this new era.”

The arduous battle to get the project going has been a 7-year-long endeavor and, most recently, included yet another return to the drawing board for designs, the 3rd in the project’s existence. 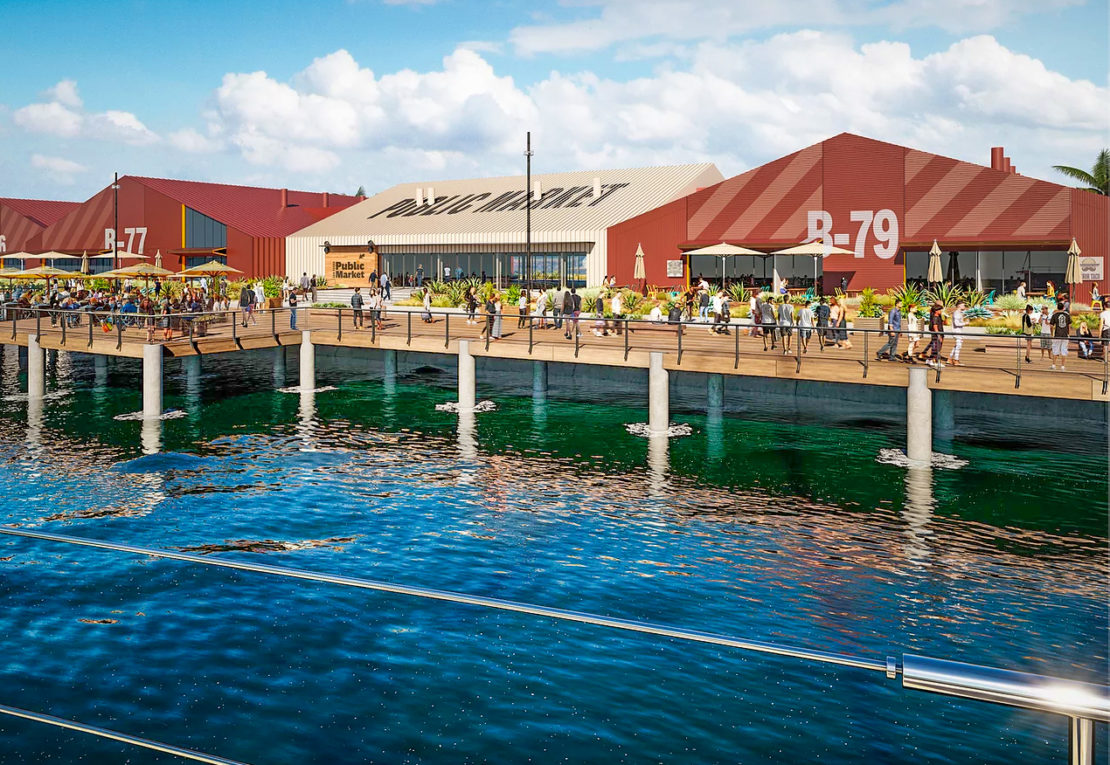 After plans were revealed in March 2016 for the $100 million renovation of the San Pedro’s famed, 30-acre waterfront area known as Ports O’ Call, not many were impressed—including a large portion of Long Beach fisherman and sailors who bounce back and forth between Ports O’ Call and Long Beach.

The initial proposals, marked by saturated colors and nods to the berths of the 1950s and 60s, were eventually replaced by the current renderings below that offer a more warehouse, earth tone-centric aesthetic.

Those then-new plans were unveiled last year by the Ratkovich Company and Jerico Development, the partnership forming the LA Waterfront Alliance overseeing the project, as the Ports O’ Call area was undergoing demolition to make way for the project. Shown at the Warner Theatre in San Pedro, the designs drew both applause and raised eyebrows. (Those designs included Rapt Studio as its design architect, James Corner Field Operations, the landscape architect firm working on the master planning for the project, and Adamson & Assoc. serving as Executive Architect.)

The unveiling revealed stark contrasts to initial proposals, entirely eschewing homage to the area’s nautical past and instead aiming for a glass-and-metal look with large, steel A-frames that encase massive expanses of retail and restaurant space.

The latest batch of renderings—set at a price tag of $150 million—seem to be a mixture of the previous, hyper-contemporary iteration and a return to a more rustic look, with corrugated metals, earth tones, and large logos being paired with an expanded patio section, more outdoor dining space and container kitchens, and play areas to accommodate visitors with children and dogs.

“As previously shared, the Market secured $30 million in equity financing, the historic approval of a 66-year lease from the Los Angeles Board of Harbor Commissioners, and the involvement of concert promotor and entertainment partner Nederlander in the development and management of our 6,000-capacity outdoor amphitheater,” the project team noted.

The project’s highlights include: