The Port of Long Beach announced this week that its community grants program will give nearly $3.7 million to two new projects expanding asthma services to vulnerable populations—including a mobile asthma clinic in North Long Beach.

With a $3 million award, the Long Beach Department of Health and Human Services will administer funds to The Children’s Clinic, St. Mary Medical Center and the Long Beach Alliance for Children with Asthma, according to a port statement.

The groups will act together to maximize reach and minimize overlapping services for children, seniors and other adults suffering from asthma, chronic obstructive pulmonary disease and cardiopulmonary illnesses, according to the port.

Pools of Hope, a rehabilitation and wellness group, will also receive $649,195 to work with the LAC+USC Breathmobile to deploy the mobile clinic-on-wheels unit to areas in North Long Beach, Compton and Paramount accessible to school-age children, according to the port.

Smog fills the air set over the Port of Long Beach In Long Beach on January 23, 2019. Photo by Thomas R. Cordova

North Long Beach residents (as well as in West and Central Long Beach) see the highest levels of pollution in the city.

The Los Angeles-Long Beach metropolitan area has also been ranked in the past for having the worst ozone pollution in the nation.

The Port of Long Beach is part of the country’s biggest port complex, supporting more than 575,000 Southern California jobs. It handles $170 billion in trade annually, according to the port.

Despite emission reductions by the Long Beach and Los Angeles ports in recent years, neighboring communities such as Wilmington, San Pedro and West Long Beach still have the highest cancer risk from air pollution and higher rates of asthma compared with the rest of the state, the Los Angeles Times reported.

The Port of Long Beach alone emitted more than 816,000 tons of air emissions in just one year, according to a 2019 air emissions inventory report. That was a reduction compared to 2005. In that time period, the port cut greenhouse gases by 19%, diesel particulates by 88%, nitrogen oxides by 58%, sulfur oxides by 97%, and the port plans to continue reducing. 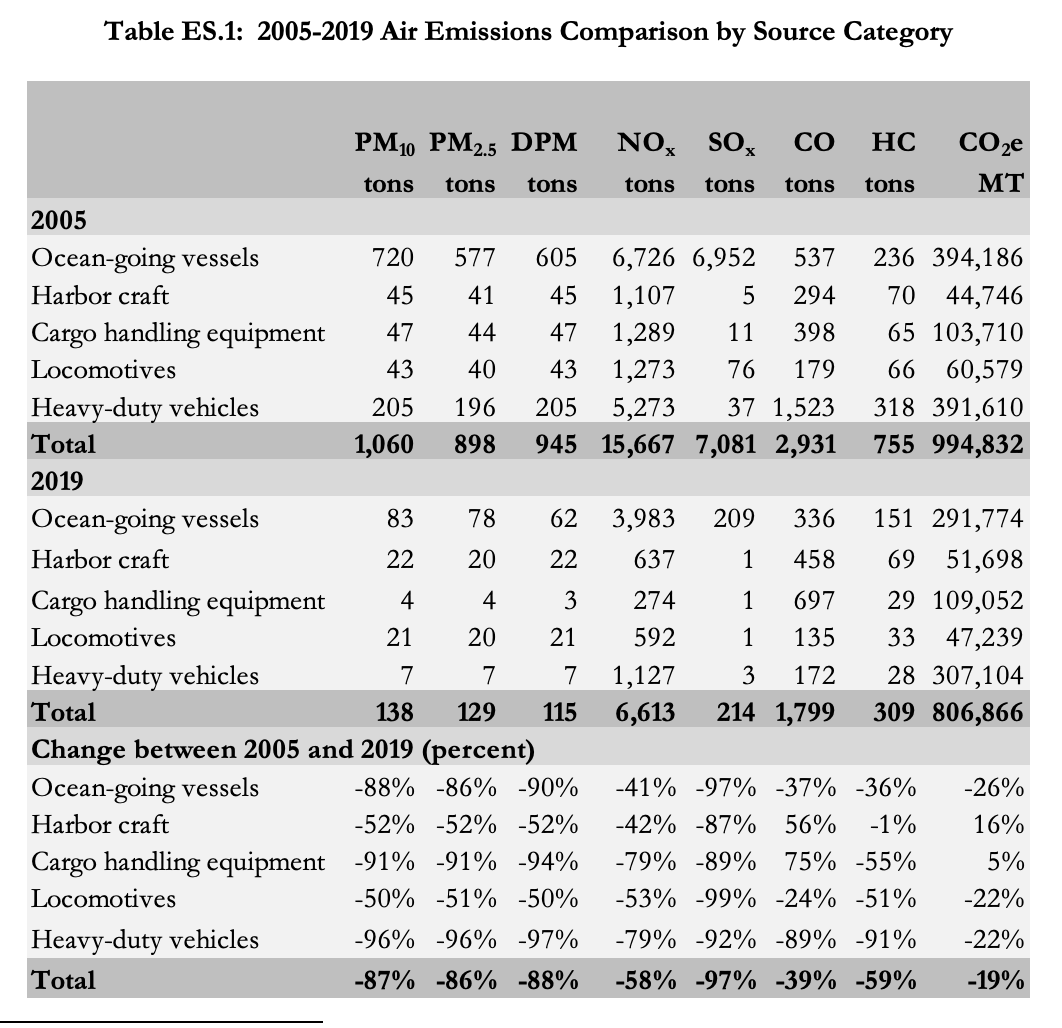 A screenshot of a chart with the port’s 2019 air emission inventory report.

The port’s community grants program was created in 2016 to distribute funding to organizations that serve populations most sensitive to port-related pollution, maximizing the aid for children, senior citizens, the chronically ill and those with asthma, according to the port.

So far, the community grants program has awarded $33.1 million to lessen the environmental impacts of the port, according to the port. Since 2009, the port has set aside nearly $65 million for grants to improve the health of children, seniors and other vulnerable populations, reduce greenhouse gases and enhance the environment.

A five-member advisory committee works with port staff to identify funding opportunities. More information about the grant program can be found here.

Editor’s note: A previous version of this story said that the Port of Long Beach reduced its air emissions by 19%, but that was only for their greenhouse gas category. This story has been updated to clarify and include the other categories of pollutants: diesel particulates, nitrogen oxides and sulfur oxides.