In an area with fewer grocery stores than other parts of the city, a West Long Beach mini-market last week received a new freezer, took down beer and cigarette ads and placed fruits at the counter as part of a city initiative aimed to promote healthy food access.

After months of coordinating, A&F Market, a store on Santa Fe Avenue near Willow Street that sells many Asian products, joined the Long Beach Healthy Market Partnership Program to improve its access to healthy food.

The city considers West, Central and North Long Beach as food deserts, which are areas with low-income communities and limited sources of fresh food. According to 2019 data from USDA’s Economic Research Service, parts of West Long Beach also fall within their food desert census tract, which it defines as a low-income tract where a substantial number or substantial share of residents does not have easy access to a supermarket or large grocery store. A 2019 Cal State Long Beach report shows that food deserts also largely affect communities of color.

A&F Market joining the Healthy Market Partnership serves as a step closer to increasing healthier options for the residents in West Long Beach. 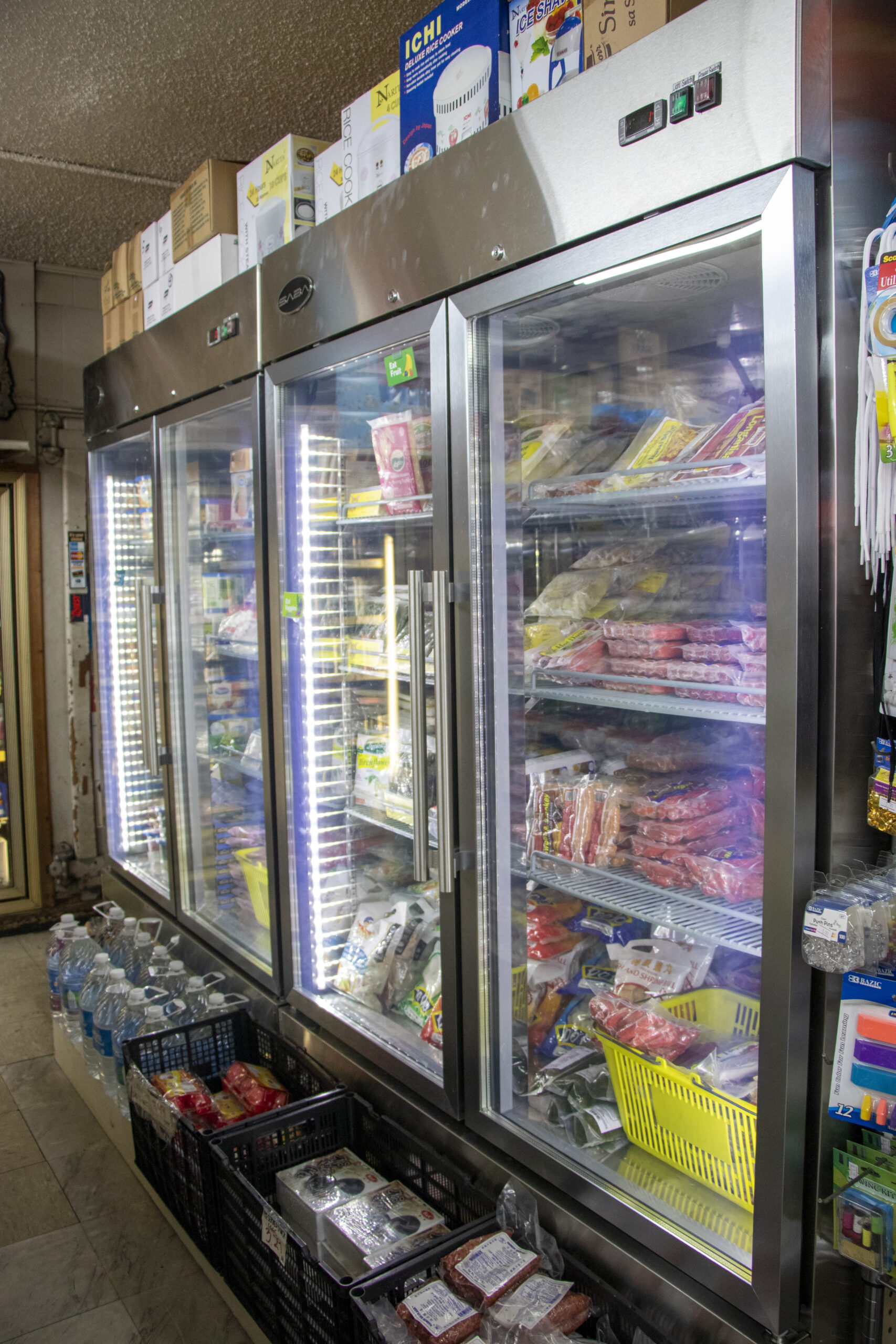 Lara Turnbull, the city’s health department community health acting bureau manager, said that while she’s waiting on a final invoice report for the freezer, A&F Market received up to $20,000 of CARES Act funds, plus additional resources from the city’s Healthy Active Long Beach Program to support their store’s transformation.

The freezer was just one of the items the store needed in order to build an inventory of fruits, vegetables and other healthy foods, Turnbull said.

“Most of them want to be healthier stores,” she said about market owners in Long Beach.

In general, Turnbull said that some key elements of a healthy market include displaying health promotion signs and messaging, reducing unhealthy food and beverage advertisements, creating or maintaining a “healthy” checkout lane or counter space, accepting CalFresh (SNAP/EBT) and stocking healthier food options such as at least two varieties of fruits and vegetables and a high-fiber cereal. 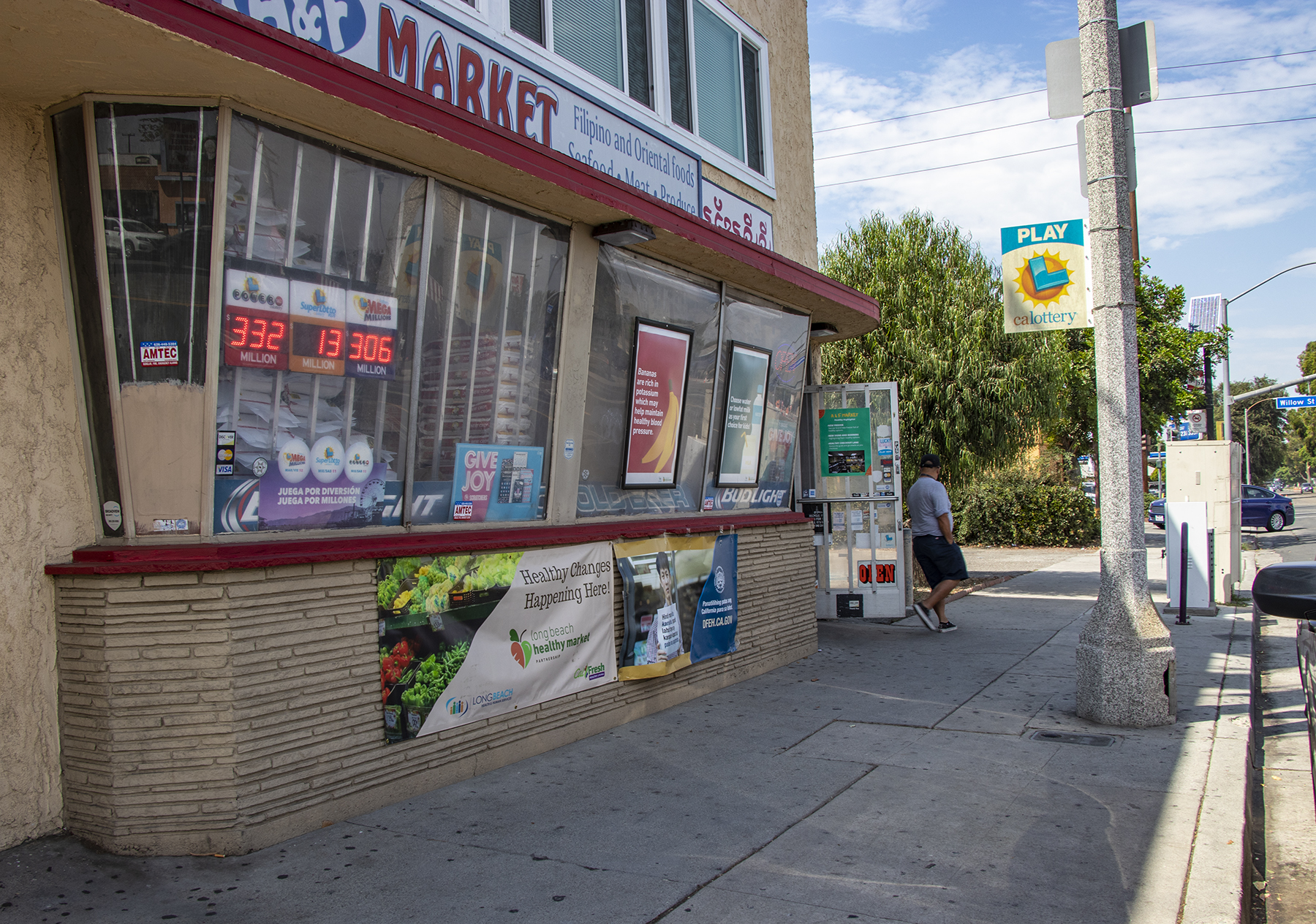 A man walks out A&F Market, which has new healthy eating advertisements, in West Long Beach on Monday, Aug. 30, 2021. This store has been recognized by the Long Beach Healthy Market Partnership Program as a “healthy market partner” after agreeing to increase its access to healthier food options and to decrease its unhealthy advertisements. Photo by Crystal Niebla.

For his part, Yin said he’s excited about promoting healthier food options through the partnership with a bonus on the aesthetics of the store. Signs that say things like “Healthy Checkout,” with mangos and honey jujubes bring more color to the counters.

“It helps us because it makes this store look nicer,” Yin said.

Tony Damico, co-director of Long Beach Fresh, was one of the partners connecting A&F Market with the city’s initiative. He said the Health Market Partnership Program has struggled because many markets might not have the resources to store more healthy food. It’d be great to have more stores to be aware of this program, he said, as communities like West Long Beach need more healthy food access.

“It’s crazy to me that this area is still a food desert,” Damico said.