Long Beach is resubmitting its Housing Element plan to state regulators for approval this month but this time it will include more parcels in “high resource” areas of the city, which was one of the requests made by the state housing agency earlier this year.

The Housing Element is a document that is required to be updated every eight years and provides a pathway for cities to meet their regional housing needs assessment, which was set by the Southern California Association of Governments last year.

While the plan does not guarantee any housing will be built, it identifies parcels where developers would be allowed to build housing in the future based on local zoning rules.

Some of the changes were driven by a September letter from the California Department of Housing and Community Development, which raised a number of issues with the city’s first submission.

Some concerns in the letter included the city’s projections that parcels that allow non-residential uses—like those zoned for mixed-use commercial—would become residential developments, an inflated projection for accessory dwelling production in the city and a failure to meet fair housing opportunities across the city. 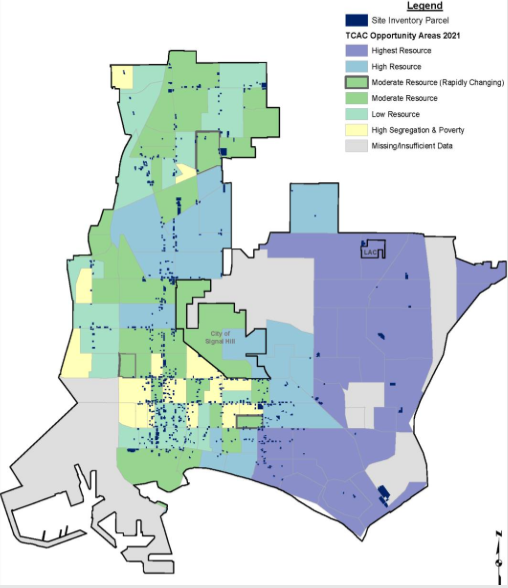 A revised map showing where the parcels could be located in the city’s Housing Element being submitted to the state.

Revisions to the plan that will be resubmitted now include 25 additional parcels added in “high resource” parts of the city. “High resource” areas include all of East Long Beach and other neighborhoods like Cal Heights and Bixby Knolls. Approximately 15% of the parcels listed are now in those high resource areas while about 40% are in the lowest resourced areas of the city.

Other programs the city has already implemented, like the inclusionary housing policy, an enhanced density bonus for developers to encourage the construction of more affordable units and potential new mechanisms to fund affordable housing in the city could all help the plan get state approval. City staff said they were confident that this version of the plan would pass state regulators’ scrutiny.

Development Services Deputy Director Christopher Koontz said that the plan is not perfectly balanced because staff had to work with existing conditions like the city’s zoning and the recently adopted Land Use Element, which dictates where housing can be built and how dense developments can be on a given block.

“But it does further our fair housing goals more than any previous endeavor by this city,” Koontz said.

A presentation to the City Council in April saw members of the public oppose the idea that East Long Beach could be mostly untouched by the policy, but now because of state’s letter, more parcels could be included in the final plan.

The city has also expanded housing development opportunities on the city’s east side with recent zoning amendments.

The approval of the Southeast Area Specific Plan earlier this year will allow for about 2,500 units to be developed in Southeast Long Beach near the border with Seal Beach. ADU production, which the city expects to be a few hundred per year for about ten years, could further bolster housing units in parts of the city currently reserved for single-family housing.

But adding significant density in those parts of the city will require zoning changes, something the City Council could request at any time. Some opportunities to zone parts of East Long Beach and corridors across the city for denser developments were written out of the Land Use Element that was adopted in 2018.

Members of the City Council echoed the displeasure from the public that so many of the parcels were still listed in areas of the city that are already densely populated even with the revisions made by staff.

“There’s so much density that we can put over the next eight to ten years in a region that already has high density,” said Councilwoman Suely Saro, who represents Central Long Beach, which has one of the larger concentrations of parcels in the housing element plan.

Saro and others said it was important for the city to get this guiding document correct and work to make the city’s zoning less segregated going forward. But given the time crunch, the council was advised that should be a discussion for a future meeting.

The state will have 60 days to review the city’s new submission and if it approves of the revised Housing Element it will head back to the City Council for final approval in early 2022. In order to avoid having to implement a rezoning program, it intended to phase in over the course of a few years by next October, the City Council and the state need to approve the Housing Element by Feb. 11, 2022.