The Long Beach City Council voted Tuesday to approve a $2.6 billion budget, one that faced harsh criticisms from community groups who said it did not go far enough to redistribute funding from the Long Beach Police Department to other city agencies.

While all departments, including the LBPD, saw their budgets shrink from last year as city officials tried to close a $30 million funding gap, activists called for steeper cuts to the LBPD to help stave off diminished community services including hits to the city’s parks and library systems.

Last month, the city announced it had reached agreements with city employee unions to implement 26 furlough days over the next year in exchange for future pay raises and other benefits. That move is expected to save $11 million.

The LBPD self-imposed over $10 million in reductions after city management directed city departments to find savings to help close the anticipated shortfall mostly brought on by the COVID-19 economic shutdowns that have squeezed the city’s revenue streams.

However, recommendations from the city’s three-person Budget Oversight Committee softened the blow to the department by limiting planned cuts to the police K-9, violent sexual predator and park patrol units. It balanced this move by cutting some overtime funding for the department.

Community organizers that helped craft this year’s People Budget gave an unprecedented presentation before the council’s vote on the budget with multiple members admonishing the council for not taking a stronger stance on the LBPD budget.

The people’s budget called for a 20% cut to the police budget, with those funds being invested into community initiatives and other city departments. The police cuts adopted in the council’s final vote were about 5%. The item, which was slated for a receive and file, failed to garner a support from a second council person to put it to a vote.

“Your silence, speaks volumes,” said Black Lives Matter Long Beach organizer Dawn Modkins, pointing to support from elected officials on social media but a lack of will to make further cuts. “The actions you take today will speak more than your platitudes on social media.”

While Modkins and others presented the People’s Budget to the council, activists marched from Recreation Park to the home of Councilwoman Suzie Price, where they placed coffins covered with the names of people killed by LBPD officers. 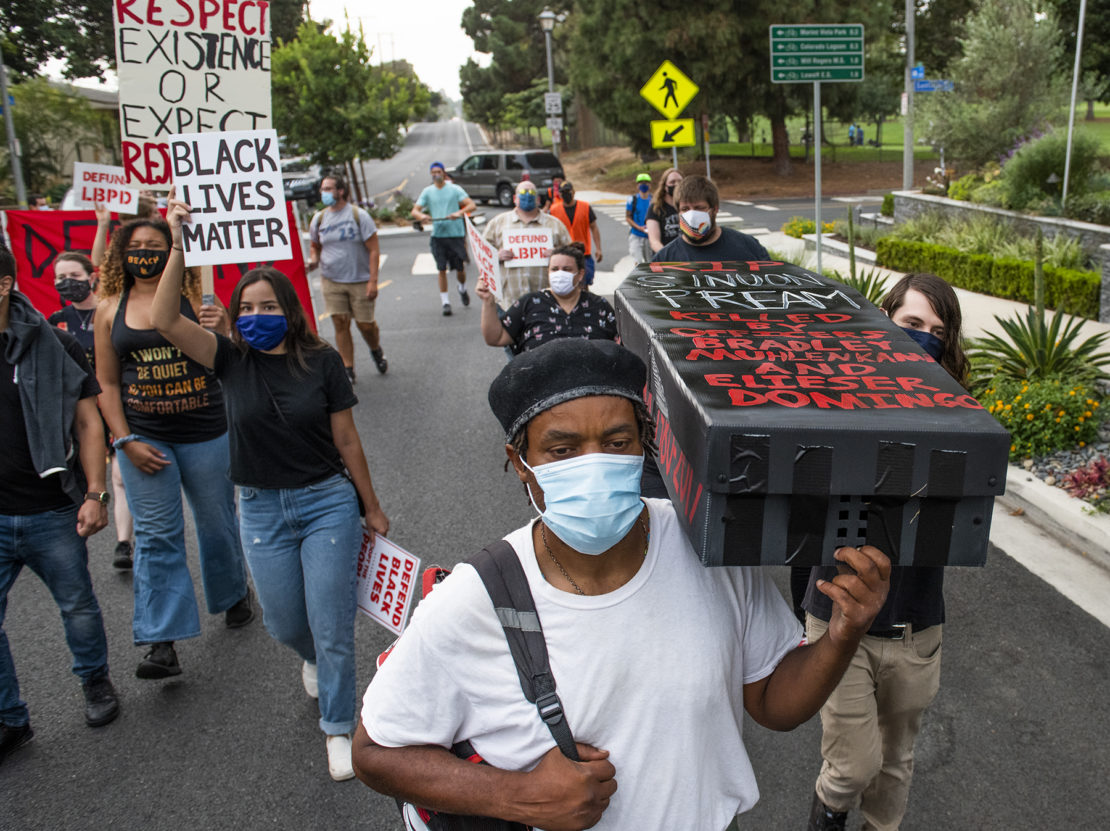 Nicky Wilson carries a makeshift coffin during a protest in Long Beach Tuesday, September 8, 2020. The protest was held in advance of the City Council’s approval of the 2021 fiscal year budget. Photo by Thomas R. Cordova.

Price has been opposed to reducing the police budget and has had her home targeted by protests in the past. It’s unclear if Price was home at the time as City Council meetings have been held remotely since March due to the pandemic.

The passage of the budget for the coming fiscal year will likely not end the city’s budget woes. Future budget cycles have projected deficits and city officials are still in the process of reconciling a $41 million shortfall for the current budget.

The city could be forced to dig deep into its reserves to close that gap. Combined with the reserve money used to plug holes in the coming year and the amount that could be used to settle the shortfall this year, the city could be left with little to no money in its reserves, money which would be needed in the event of a natural disaster or a prolonged battle with the pandemic.

Some of the things funded by reserve money were recommendations from Mayor Robert Garcia, which included keeping parking citation services in-house as well as protecting library hours of operation and preventing a spike in youth-sport registration fees.

Other balancing features of this budget will raise or create new parking fees at some city parks as well as reduce maintenance of some open spaces. Funding for the city’s fleet of vehicles including, the police and fire departments, was reallocated toward fixing some of the city’s worst streets.

“Everyone is sacrificing in this budget,” Garcia said. “There are many cuts across the city, many of which are difficult.”

As part of the budget, elected officials like Garcia and the City Council could take part in a voluntary furlough program where 10% of their salaries are used to fund various city activities over the next year. A recommendation made by Councilwoman Stacy Mungo would have allowed for council members to direct their furloughed salary savings to support the city’s parks and libraries but the motion failed. The foregone salaries will be deposited into the general fund.

It’s unclear how much revenue could be generated by this program. A city memo stated that even with full participation from all elected officials, the city would be legally obligated to make tax and retirement contributions on behalf of the individuals.