When campus closed, a star Cabrillo student saw her life upended; here’s how she carried on • Long Beach Post News
What are the best things about life in Long Beach? • Best of Long Beach 2021 VOTE NOW
- ADVERTISEMENT -

She was in class at Cabrillo High School when she heard the campus would be closing for a few weeks. At least that was the plan at the time, before COVID-19 was truly raging out of control.

“At that moment there was already a lot going on at school because we’d just lost a former ASB member who’d died,” 16-year-old Rankin recalled. “It was a lot for us. I think a lot of us were just starting to get over that when we were told school was canceled. I was sitting there wanting to cry.”

More than 10 months later, Rankin and her friends are still waiting to return to the classroom while they navigate a world of online classes, canceled extracurriculars and home lives that can be more stressful than ever.

For teenagers like herself, Rankin said, the disappearance of a grounding force in her life—her high school—is a heavier burden than many people know.

A star on campus

Cabrillo High School is a sprawling 45 acre campus on Long Beach’s Westside, and you’d be hard pressed to find a square foot that Rankin hasn’t left her fingerprints on over the last three years.

Although just a junior, she’s the student body president this year; she’s also been a part of the dance team; she’s been in plays; she’s played basketball and volleyball at the adjacent Boys & Girls Club; and she’s been an A student. According to people that know her, she’s done all of that while radiating a positive personality that staff members on campus draw inspiration from.

“She’s the kind of kid we are here to help. She’s why we struggle and why we get up every day to do this job, is to help kids like that,” said Cabrillo vice principal Stacie Alexander. “Elementary school teachers have to help struggling kids so that they can grow up to be Korea. Middle school teachers have to help with those awkward years so their students can grow into being Korea. She is the embodiment of why we are here.” Rankin’s connection to her school has been one of the things that’s helped her flourish, drawing accolades and attention: She was named the Long Beach Boys & Girls Club’s Youth of the Year in November, in recognition of her story of overcoming severe anxiety while in the foster system in elementary school.

And her profile has continued to rise. She was interviewed on Fox 11 recently about how Kamala Harris’ inauguration has inspired her, and she spoke at an LBUSD Board of Education meeting earlier this school year about the challenges of online learning, and how she and her classmates are overcoming them.

But those challenges have been significant.

With her normal routine stripped away after schools shut down for the pandemic, Rankin said she struggled with her mental health in a major way last spring.

Rankin’s mother, Keira Davis, found herself in an impossible situation. Her daughter was struggling and her grades were slipping, but the avenues parents usually employ to set boundaries for kids-—like taking away cell phones or other technology—would only serve to further isolate Korea.

“Already as parents we don’t get instruction manuals with our children. Now, to have something huge like this happen on top of that was hard,” she said. “This whole situation is traumatic and devastating for them, especially because it was so sudden. Out of nowhere, everything was taken away from them. My daughter is a kid that goes to school, does ASB, does dance, does Boys and Girls Club, and her whole life stopped. She was in a deep, deep depression for a while.”

Rankin said that her mother, a few teachers at school, and her ASB advisor were key to helping pull her out of the hole she found herself in.

“My teachers were texting me and reaching out to my mom, they kept letting me know that I wasn’t alone,” she said. “They would message me in our Zoom chats; they sent emails; they really connected.” 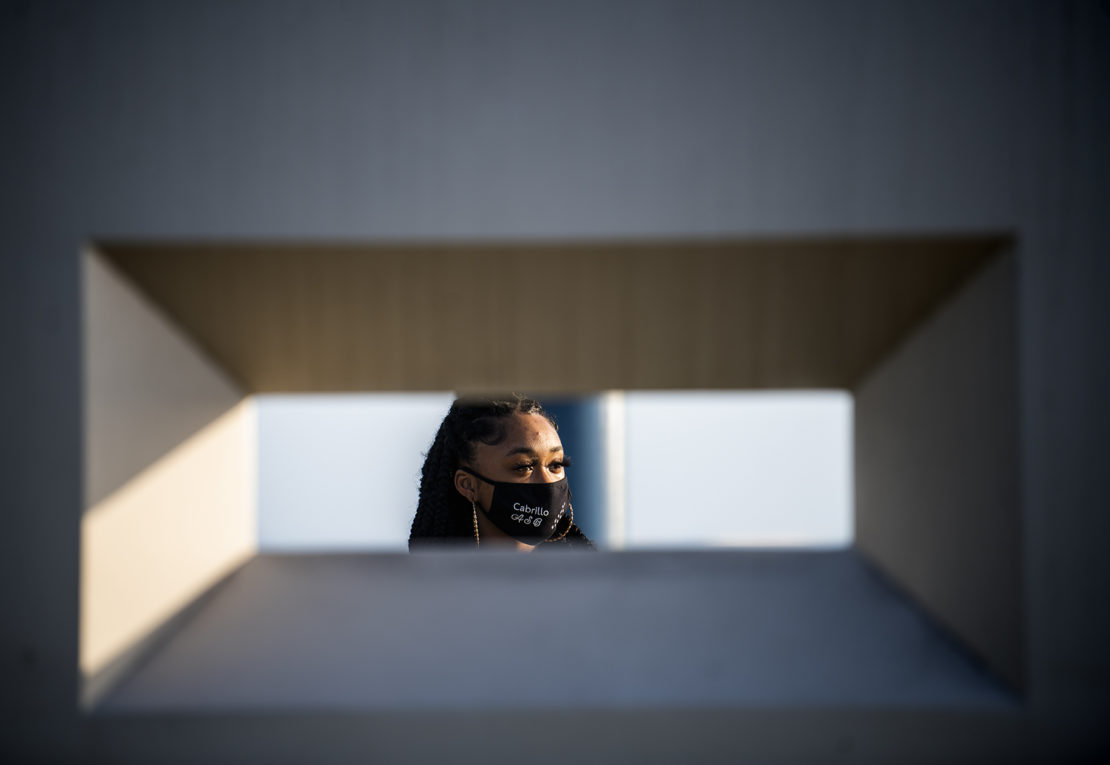 Gradually, she came back to herself.

“The first few months of the pandemic I didn’t FaceTime anyone, my grades were falling, I was just isolated completely to myself,” she said. “As summer came and the new school year started, I realized I still have to continue my story.”

Rankin’s grades have been in good shape this year, but a quick peek at her schedule gives a pretty clear glimpse into why LBUSD students—like students across the country—are getting lower grades this year while doing distance learning.

On a normal day, Rankin attends her online classes and her virtual extracurriculars for ASB or other programs. She also watches her younger siblings Kasii and Kerdez. She goes to work at Old Navy. Then she stays up doing homework.

“Some of our teachers are trying to stick to their regular curriculum and they’re packing in homework,” she said. “It’s so much screen time after being in class on Zoom all day. We’re still at home. We have to run errands, we have to do chores, we have to raise our little siblings. Some of us have to work because our parents have been laid off. Some of us are looking for scholarships and good grades. Some of us are just trying to survive. It’s just so much. And the Old Navy is open but schools aren’t.”

That grinding schedule comes without in-person interaction with friends for kids like Rankin, who’ve abided by the stay-at-home order strictly. It’s a lot for a teenager to handle in a week, let alone a 10-month span. Asked how she’s been able to stay positive in her routine after having struggled with depression, Rankin said it’s important to find time for herself.

“If I can find just that 15 minutes to myself to listen to music or watch TV at the end of the day,” she said. “But I have to do that instead of sleep.”

A bright future, an uncertain present

Rankin’s goals are lofty, but the adults in her life have no doubt she’ll reach them. Inspired by her grandmother, who was a member of the Black Panther Party after serving in the Air Force, she wants to be a civil rights attorney. The plan is to graduate from Cabrillo, go to Howard University and work toward a law degree. 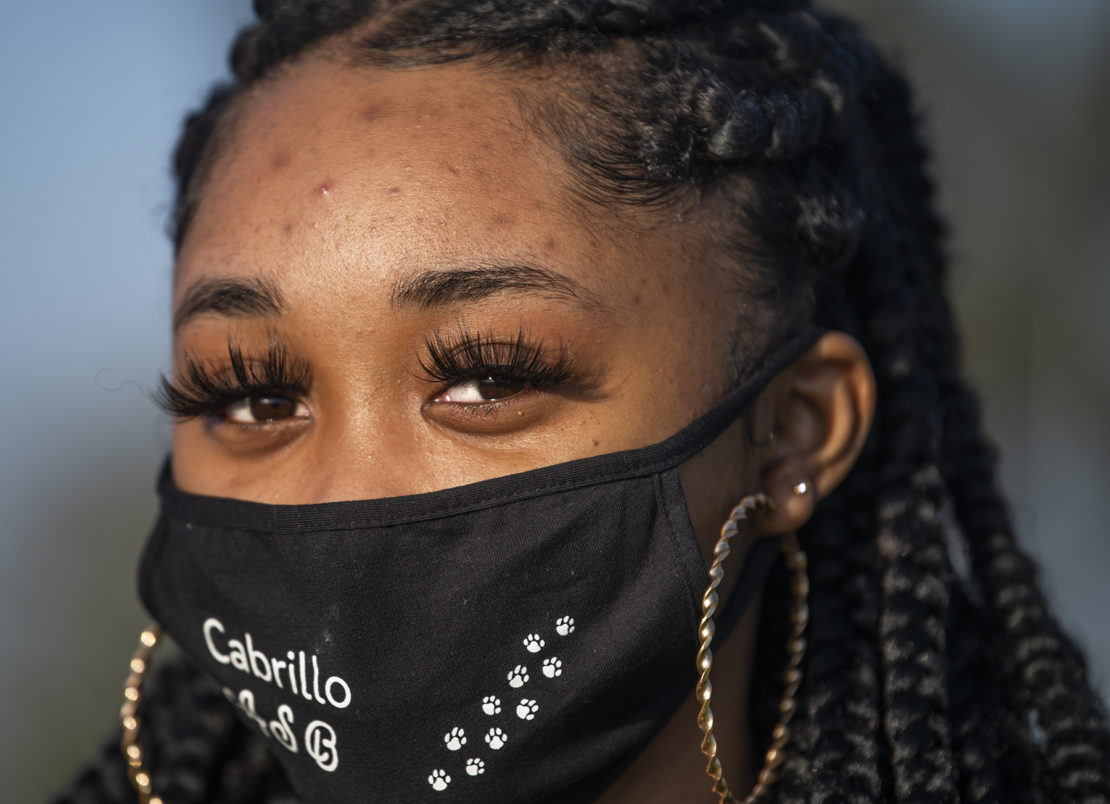 Those goals allow her to see her life outside of the confines of the distance-learning world she’s living in right now. She also said that she wouldn’t be comfortable coming back on campus right away because she and her family are still doing everything they can to minimize exposure to the virus. LBUSD currently plans to begin bringing a limited number of students back to campus on March 1, but that date has been pushed back before.

Given that students, parents and teachers are 10 months into the pandemic, Rankin said she’d like to see more compassion in how distance learning is structured, with the knowledge that most students will be learning from home for at least another month.

“Say you’re a freshman at your school, the teachers don’t know you or have that connection,” she said. “I got through my hard times because I had connections with people. If teachers allowed us to express our emotions for a few minutes in class that would help. There could be one mental health class everyone takes that focuses on time management and mental health to find different ways to handle things we’re going through.”

Davis talks about her daughter as a mother who knows she has a special child, and who hears that from plenty of teachers and other adults. She’s incredibly proud of Korea, but also worried about her.

“Not being around people leaves a void for her. Her whole world was school,” she said. “So she’s taken on things to keep her mind busy. If she’s not doing something it’s hard for her. She had to self-heal and find things to fill the void of not being there. All these kids lost everything in the blink of an eye, and they’re just having to figure out how to make it work.”