LBUSD picks new school board boundaries, sends to City Council for approval • Long Beach Post News
- ADVERTISEMENT -
Help shape our election coverage. Tell us what issues are most important in your community, your neighborhood and your home. >>>Take the survey here.<<<

The Long Beach Unified School District Board of Education has finished selecting a map that redraws what areas of the city each board member represents. In a unanimous vote Wednesday evening, the board voted to forward the map to the Long Beach City Council, which is expected to formally adopt the map at its next meeting, Dec. 7.

The new map will be in effect for the next decade. The districts are redrawn every 10 years based on the most recent U.S. Census data to make sure residents have equal representation.

The map selected Wednesday features some significant changes to the district’s five school board areas, including the city of Signal Hill moving from Doug Otto’s 4th District to Erik Miller’s 2nd District. 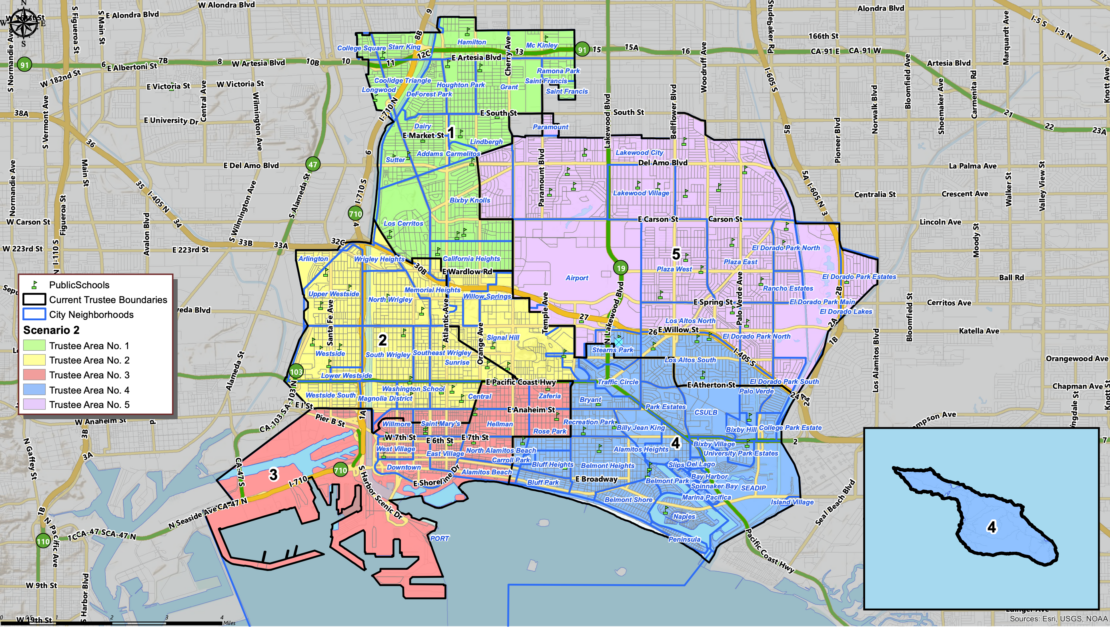 The board selected the second of three proposed maps because of the way it largely kept communities and neighborhoods intact in the new areas.

The new boundaries do not affect which schools children attend, just which board member represents which area of the city.

The redistricting was necessitated by the new census data, which showed a 14% variance in the population between East Long Beach’s 5th Area and Downtown’s 3rd Area. Under the new map approved Wednesday evening, there’s only a 7.6% population variance between board areas. 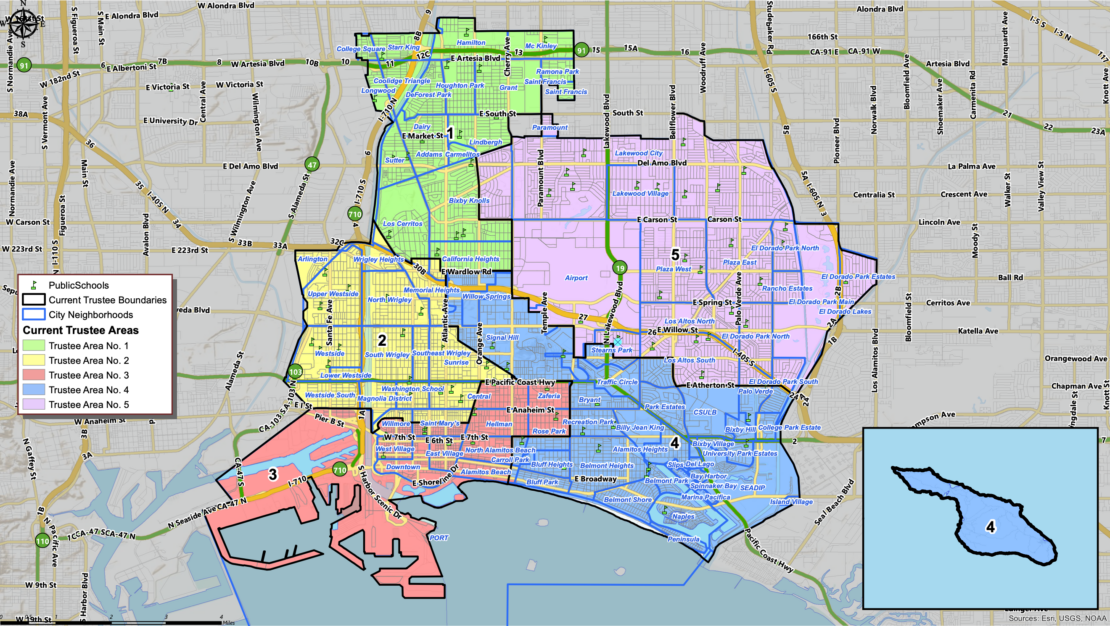 In addition to Signal Hill moving, there were some changes in the Willmore-Downtown borders, as well as a shift in the border between East Long Beach’s 5th Area and Belmont Shore’s 4th Area. As Otto’s district lost Signal Hill, it expanded its borders northward, taking over Stanford Middle School and Gant and Prisk elementary schools, among others.

“I stand to have five fewer schools in the fifth district and that makes me sad,” said Board Member Diana Craighead. “I’ve enjoyed representing them, but I understand it’s for the greater good. I’ll be very sad not to be representing those schools.”

Otto expressed similar regret over losing Signal Hill, although he was happy for the city’s residents that the territory wasn’t split in half.

The district first presented the three maps to the public on Oct. 20 and over the last month and a half conducted two district-hosted meetings, launched a redistricting website as well as community surveys, and sent 40,000 postcards to LBUSD families to alert them to the process.

Board Members Erik Miller and Megan Kerr both praised the district for being aggressive in its outreach to bring in community responses, with Kerr saying the process was lightyears ahead of the last time the district shifted these boundaries a decade ago.

“I’ve talked to several folks who were actively engaged in doing things around the district then, and we have very little recollection of what that was like and how it went down,” she said. “Thank you for a very robust process that, in my remembering, is unprecedented.”

Benitez said he hoped the City Council would approve the board’s map with no drama next week.

“I encourage them to listen to what has been discussed here as we take action on a map tonight to help inform their decision on approving what we move forward tonight,” he said.

If the City Council approves the map on Tuesday, it would go into effect immediately, meaning they would be in place for voters for next year’s LBUSD elections. The seats for areas 1 (Kerr), 3 (Benitez), and 5 (Craighead) will be up for election in 2022, with June 7 set for the primary election.