Tensions between the Long Beach Unified School District and its teachers union continued to rise on Wednesday evening after the district reaffirmed its stance that teachers must come to the classroom to teach virtually this fall.

Teachers have protested the decision, saying they want the option to choose whether they teach from the classroom or home, citing health and safety concerns around leaving their houses.

“Our interest in having teachers work from the classroom is not a statement against our teachers,” LBUSD Superintendent Jill Baker said during the board meeting. “We love our teachers and we care about our teachers. Our decision takes health and safety in mind while thinking about the needs of every student and proceeding with our focus on excellence and equity, while attempting to not magnify the inequities that existed before the pandemic.”

The Teachers Association of Long Beach, the union representing LBUSD teachers, has made it clear that this will be a sticking point. Teachers were upset enough with the decision that they could threaten to strike, according to the union.

There has never been a strike in TALB history, but the union’s executive director, Chris Callopy, said that the impasse could trigger a mediation process that may end in a strike.

Callopy said he doesn’t think the association will “jump through all the hurdles” to reach a strike in the next three weeks before school starts on Sept. 1, “but unprecedented times can lead to unprecedented actions.”

Work location is not bargained for in the union’s contract, and is at the discretion of the district. TALB leadership has acknowledged this, but teachers’ fears regarding the COVID-19 pandemic override that, in their eyes.

The issue has become a flashpoint of online debate, with a large contingent of parents supporting teachers’ request to choose their work location. Honks from a caravan protest of teachers and parents were audible during the Board meeting. Nine in-person speakers and 50 emails addressed the issue, with most in support of teachers choosing their location. 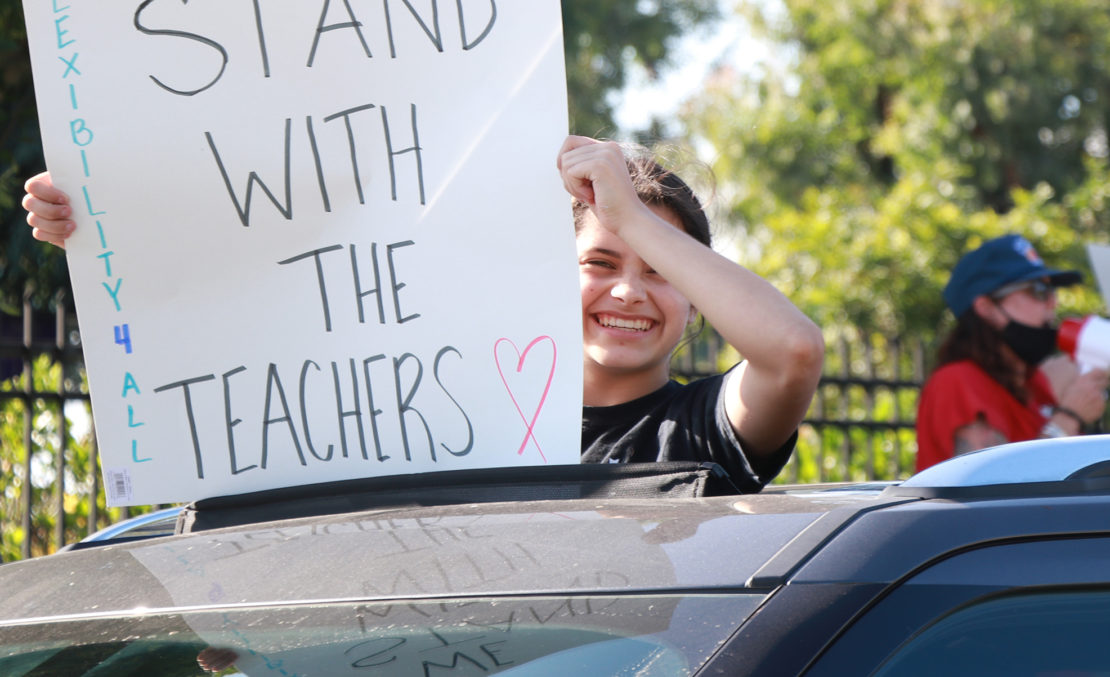 A caravan of cars turned out to support teachers’ demand that they be allowed to choose where they teach from for virtual classes. Photo by Crystal Niebla.

“I don’t have a problem going back to school, if you ask for us to be on campus I’ll be there,” said John Kane, one of the speakers who is a teacher at Jordan High. “But I don’t just speak for myself. A lot of people, a lot of colleagues have approached me, who are nervous. These people are scared. All we’re asking for is just a chance to be flexible.”

Many school districts have already chosen to allow teachers to work from home if they choose, including the Los Angeles Unified School District.