The flagship high school of the Long Beach Unified School District has been a major cultural and educational force in the city since its founding in 1895 as Long Beach High School—two years before the city incorporated.

At a town hall meeting held in the school’s Osman Auditorium earlier this month, architects and facilitators from Irvine-based LPA Design Studios presented a master plan for major upgrades to the historic campus, which has been mostly unchanged for more than a half-century. 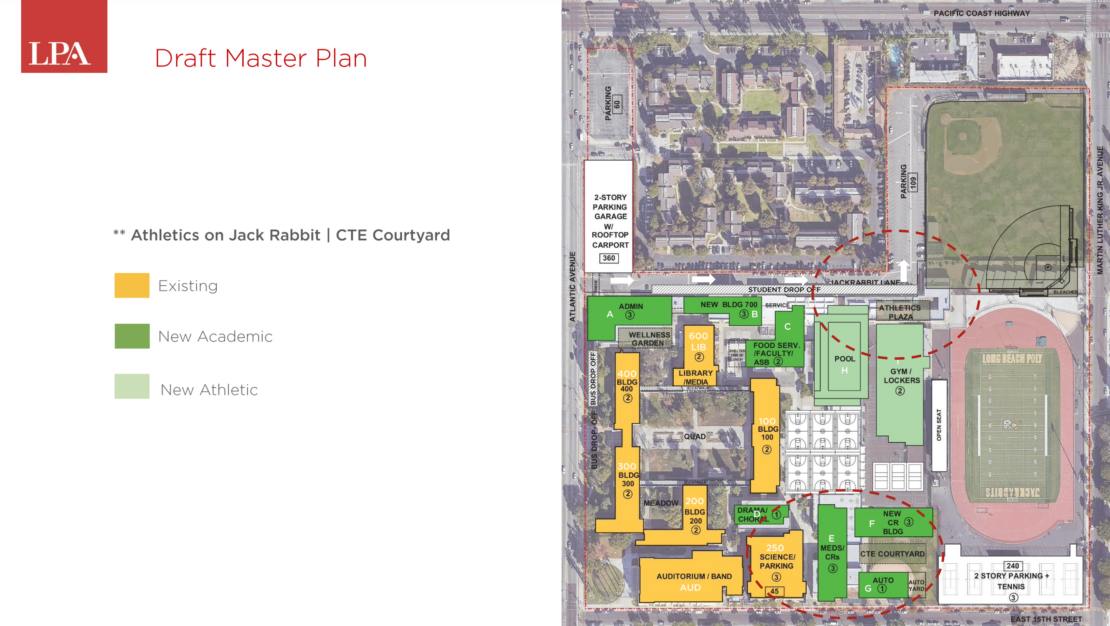 “To work on a campus like this is a real honor. It’s a rare opportunity,” said LPA facilitator Rick Musto. “We work on design locations that are sometimes vanilla, and this is different.”

LPA recently renovated Poly’s auditorium, the only building on campus that survived the 1933 earthquake (although with significant repairs and renovation done at that time). The firm’s approach modernized the century-old building while also maintaining much of its historical charm, including retaining the “PHS” shields on the end of each row of seating. Musto and the rest of the LPA team emphasized that their vision for the campus would similarly be historically focused.

“We worked at Roosevelt High recently which was a historic site, and we’re accustomed to working around historic elements and protecting them,” said Musto.

At Poly, those elements include several protected works of art as well as a mosaic sculpture painting and engravings around the campus. But the historic nature of the campus has had a major downside too, with aging infrastructure and buildings that have long been due for an upgrade. The school, which serves more than 4,000 students as the largest school in the LBUSD, hasn’t had a new building or major renovation other than its auditorium in decades.

There’s a disconnect between the tradition of the school and the condition of its campus that’s evident almost anywhere you look. It hasn’t been lost on senior Diana Michaelson, a student in Poly’s prestigious PACE academic magnet who also organized the Long Beach Green Schools campaign. Michaelson was one of the students on hand at last week’s town hall.

“We’re this amazing school, we’ve produced all these pro athletes and musicians and scholars, so many amazing people have come through here,” she said in an interview after. “Then you walk into a bathroom, and it’s like, ‘Oh.’ It’s such opposite ends of the spectrum. The school is so well-known across the nation; it needs facilities that are up to date and it’s a relief to know the school district is taking action.”

The master plan for the school was created after LPA’s assessment and walkthroughs of the campus, as well as several meetings with Poly staff, teachers, coaches and students. The new plan calls for: major renovations (without demolition) of all the buildings around Poly’s quad; the construction of a new three-story administration building where the cafeteria currently is at the corner of Atlantic Avenue and Jackrabbit Lane; two other new school buildings along Jackrabbit Lane; a new drama/choral building and three new class buildings behind where the science building currently sits; a new state-of-the-art outdoor pool; a new two-story gymnasium with increased capacity as well as a new weight room and locker facilities; two new parking structures including one with a tennis court and seating on its roof.

In the process of building the new-and-improved Poly, some historic buildings are slated for demolition, including the school’s indoor natatorium and the Ron Palmer Pavilion basketball gym, home to more wins and NBA products than any other high school in California. The new parking structures will add more than 400 spots to the parking-starved campus, and will also include electric vehicle chargers.

There were plenty of questions and concerns from the 100 or so people on hand to hear the presentation. Football coach Stephen Barbee questioned whether the new weight room would be big enough to service the school’s athletes, and several parents asked about timelines and whether or not their students would be moved off campus during construction.

Musto said that the review process alone for these types of major projects can take up to a year. He assured parents that the school’s students would not be moved off campus at any point, with construction taking a phased approach that would mean it could be upwards of eight years before the vision is completed.

Musto acknowledged that it’s early days for the Poly renovations, but expressed excitement about the process.

“Kudos to the district for getting us kick-started in this process,” he said. “It just so happens that a week ago the citizens passed a local bond which allows a lot of these projects to go forward. All we’re trying to do is put together the best plan possible.”