In the early months of the pandemic, Ryan Lee of Long Beach said he wasn’t all that concerned about contracting a virus that seemed mostly a problem for older folks. Sometimes he masked up, mostly he didn’t. After all, he was still a healthy 22-year-old.

But then, as the economy began to reopen and testing became more available, the pandemic’s dynamic shifted dramatically, with rising numbers of younger people testing positive for COVID-19.

Lee shifted, too. He began frequently washing his hands and now never leaves home without a mask, which he used to wear only at his customer service job at a CVS. He said the new demographic trend took on an even more urgent and personal meaning for him when his dad contracted the virus.

Unfortunately, Lee said, many others in his age group aren’t being nearly so diligent.

“A group of my friends actually do care about it and they’ll take precautions…but others I know don’t really care,” said Lee, whose dad has recovered. “It’s not really bothering them and they aren’t really being affected by it. It’s half-and-half, really.”

Long Beach City Health Officer Dr. Anissa Davis said the city has seen a virus that mostly affected nursing home residents transform into one that is rapidly spreading among younger people. The median age of new infections in Long Beach, she said, is 33.

This tilt towards younger infections is beginning to be reflected in the city’s coronavirus death rates. Earlier in the pandemic, the median age of death from COVID-19 was 86, with more than 80% of those individuals living in local nursing homes.

Today, the median age has dropped to 64, and more than half of those fatalities are not in nursing homes. In recent weeks, the city for the first time lost two people in their 20s, both with underlying health conditions. 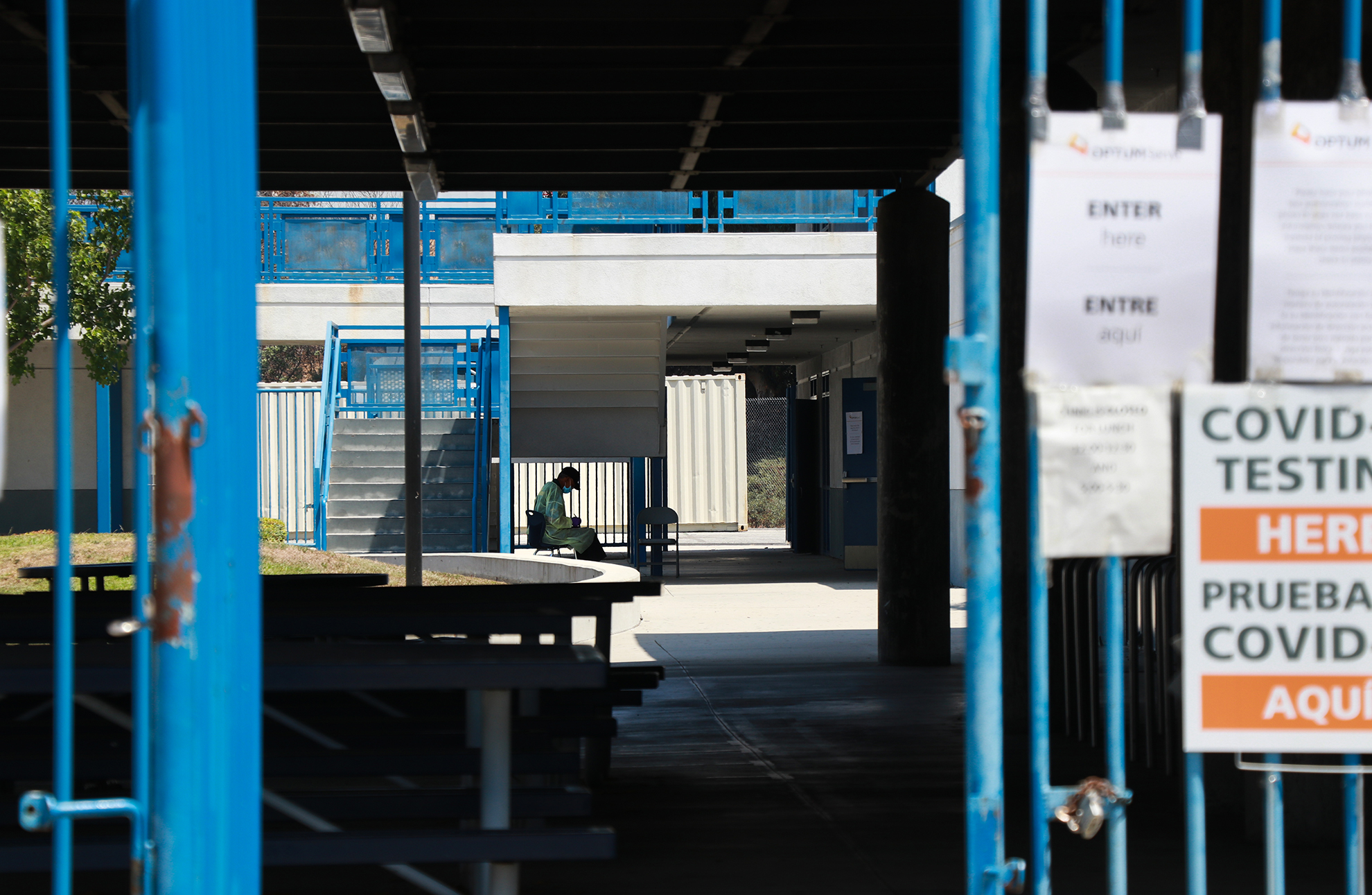 A COVID-19 testing facilitator sits outside an entrance where people get tested for the coronavirus at the Jordan Plus High School on July 21, 2020. Photo by Crystal Niebla.

Still, for some in this increasingly vulnerable demographic, the message isn’t getting through.

Amy, a 23-year-old Compton resident who declined to give her last name, was waiting her turn one recent morning at a coronavirus testing site at Jordan Plus High School in North Long Beach. As the mother of a 1-year-old child, Amy said she decided to do the responsible thing and get tested after learning that her grandmother had contracted the virus. Her 18-year-old brother was with her to get tested, too.

But Amy is no true believer. She thinks the pandemic is overblown, that it’s merely a kind of flu that infects older people, like her recovering grandmother, or is similar to the far less lethal SARS outbreak in the early 2000s. The government, she said, just slapped a new name on the sickness.

“To be honest,” she said, “I don’t believe in it, but we have to get tested because I have a kid.”

Amy said she was unaware of the demographic shift in infections and acknowledged that, unlike her, many young people are ignoring the recommended preventive measures.

In March, when the pandemic began sweeping across the globe, Dan White, a 28-year-old personal tutor who lives in Downtown Long Beach, believed that young and healthy people weren’t threatened, based on the preliminary reports that older people were most at risk.

But as Long Beach’s daily demographic numbers started to change, so too did his views on the need for broad preventive action—although White said he, for one, was already being extra cautious. When bars briefly opened, he said, he stayed away.

White can’t say the same for some of his generational cohorts, whom he said haven’t truly changed their lifestyles. Even some of his best friends, he said, aren’t expressing many concerns about the virus.

“I’ve definitely become more aware of the fact that it’s more serious, perhaps, than we thought,” he said. “It affects people my age in a way that I think we really didn’t think about.”

Since the pandemic started, the teenager said he has met only once with a group of friends in person, and everyone brought their own lunch and sat 6 feet apart. Since then, most of their interactions have been on Zoom.

“We’ve been taking it very seriously from the beginning,” he said.

Bassett said he’s been getting creative in how he spends his increasing time online with friends.

“I think COVID and quarantine has really forced us to explore more of those opportunities,” he said. “I never thought before I could watch TV with my friends on streaming, but now we’re doing more of that.” 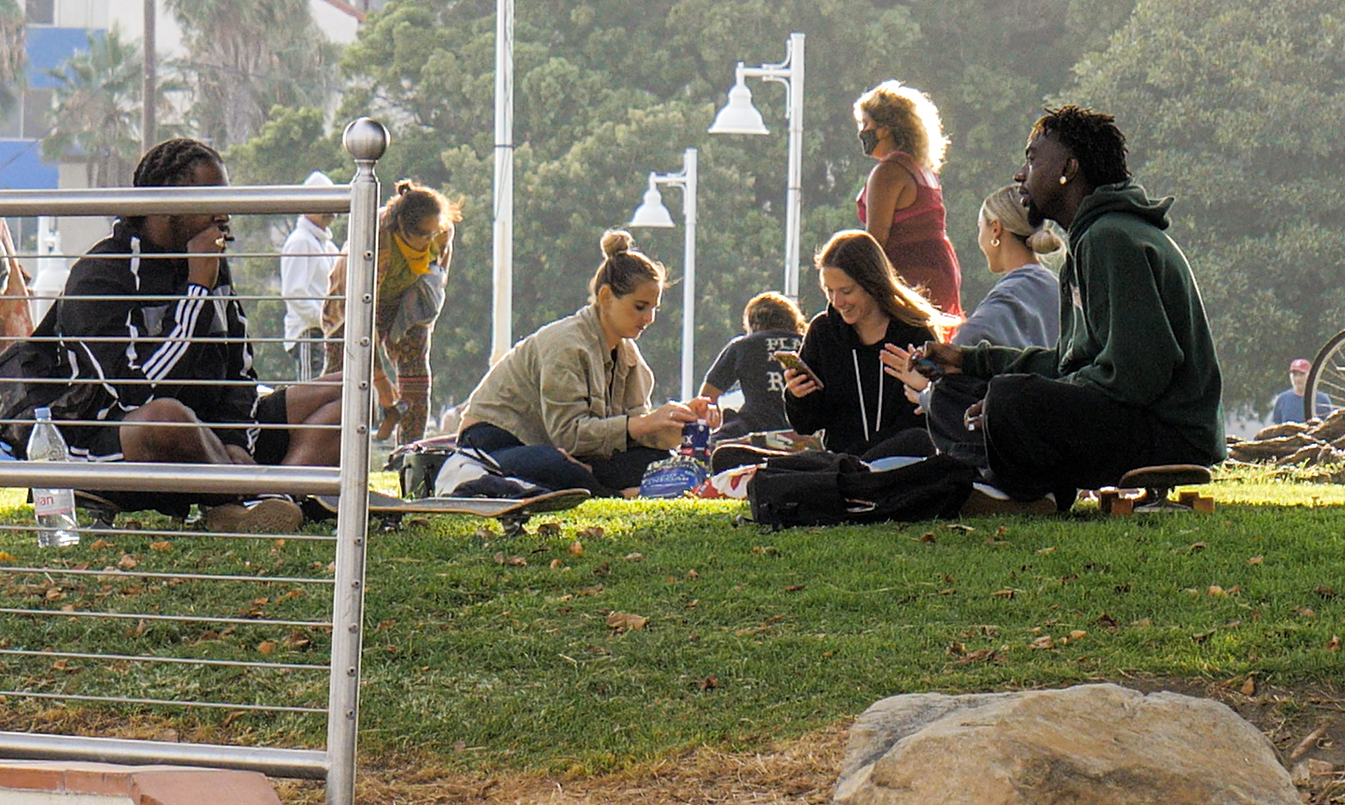 A group of young people sit on the grass at Bluff Park on Aug. 4, 2020. While there are younger people testing positive for the virus, some proceed with caution, and others with less worry. Video still by Steven Smith.

“I looked down the beach the other day and there were tons of people not wearing masks and it’s just like a regular day at the beach and that’s what’s really scary,” he said.

Health officials have said it’s difficult to pinpoint the exact cause of the surge of cases in younger people, but they started to increase as many states reopened bars, restaurants and offices.

Lilia Peterson, a 27-year-old barber from Central Long Beach, thinks she contracted the virus in June after an emergency trip to Texas to see her mother. She was on the road a lot–– stopping at gas stations and public spaces. She ate at a hotel restaurant by the airport in Tucson, Arizona, where she believes many tourists may have passed through.

When Peterson returned to California, she took a test to ensure she wouldn’t bring the virus into her home. Two of her roommates have immunocompromised parents and she didn’t want to put them in potential danger. When her test came back positive, she said, she quickly self-quarantined for 10 days in her bedroom.

Peterson said her symptoms were mild, mostly a persistent headache and fatigue. She said her chest was tight, too, but that she’s convinced it was from the anxiety she developed after learning of her diagnosis.

“Honestly if I didn’t have a positive test I wouldn’t have had any idea,” she said of her symptoms.

For Peterson, the idea that careless young people are refusing to follow health orders is a misconception. Most people her age are essential workers or have jobs in the service industry, she said, which puts them at greater risk for exposure from the public.

Since they’ve been asked to don masks and gloves to go back to work, Peterson said that some workers have developed a false sense of security that going out with a friend for a beer is no different than working the cash register at work.

“People my age are going back to work…as approved by the powers that be,” she said. “But if that’s OK, then going to my friend’s apartment is also OK. If I’m allowed to work then I should be allowed to play.”

But Peterson added: “I don’t want the story to become about, ‘these reckless youths are abandoning their sense in the name of partying.’ A lot of young people have working-class jobs, and the working-class jobs were the first ones, by and large, to reopen in the last month or two months or so.”

Central Long Beach resident Jude Cruz, 18, said she’s been increasingly concerned about the health of young people like her ever since she contracted COVID-19 in early June. 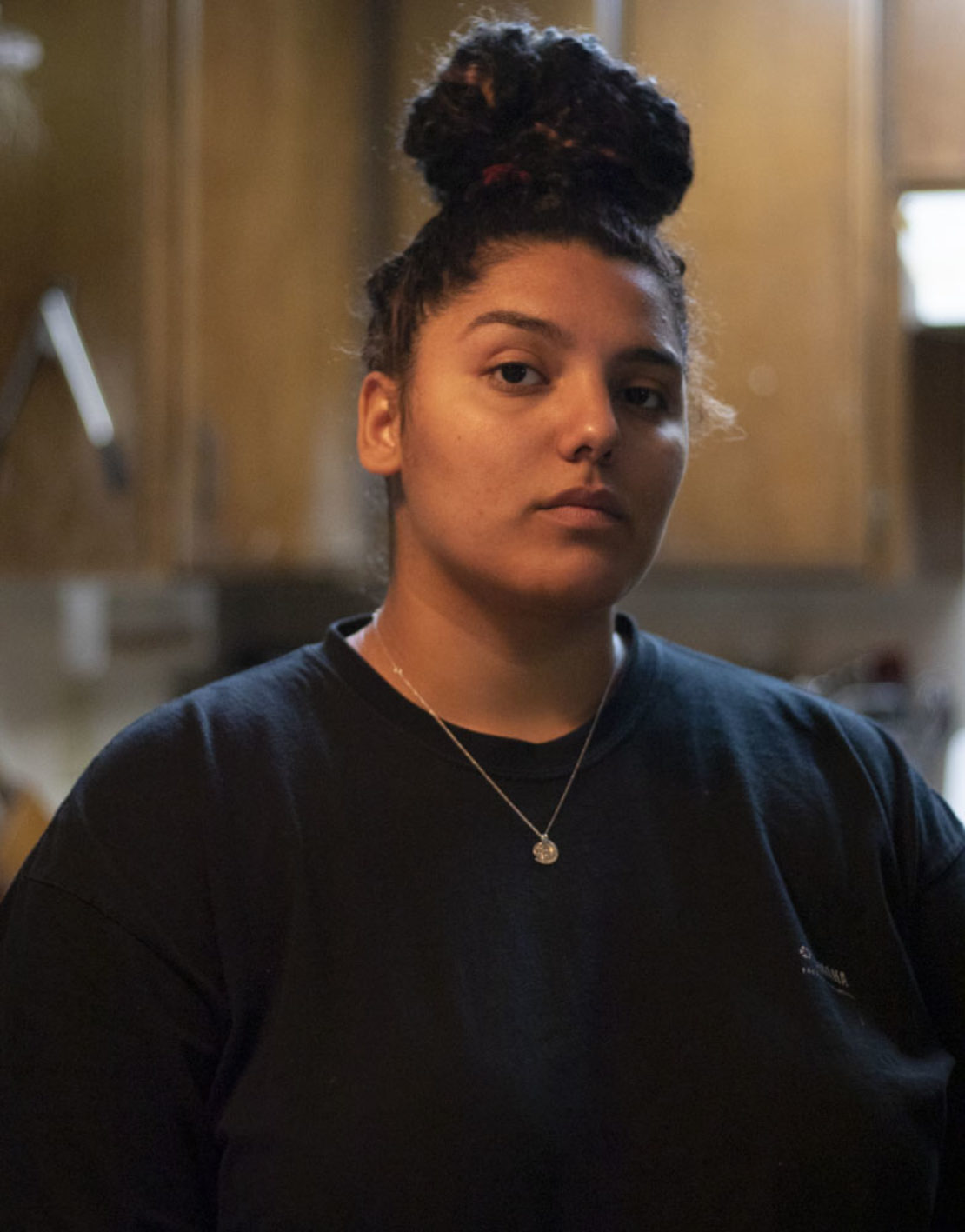 Long Beach resident Jude Cruz, 18, became infected as an essential worker at a 99 Cents Only Store in San Pedro. Photo by Crystal Niebla.

Cruz said she was one of about a half dozen employees infected while working at a 99 Cents Only Store in San Pedro, where customers frequently and belligerently ignored face-covering orders or wore them improperly. Cruz said she and her co-workers always wore masks, although some employees removed them after hours while restocking shelves or cleaning the store.

Cruz said that during her self-quarantine, her father had to rush her to an emergency room at 10 p.m. because her symptoms were unbearable–a burning soreness in her lungs and a stabbing pain when she coughed.

Cruz said she thinks she got hit hard because of her asthma, an underlying health issue that she attributes to growing up in Wilmington, a neighborhood surrounded by oil refineries and crowded with trucks. An MRI at the hospital that night showed some lingering lung damage from the virus, she said. “I felt so sick.”

While her and her friend’s attitudes toward the virus have always been serious, what’s different now, she said, is her understanding that “anybody can get it,” mask or no mask.

Cruz said she still has lingering symptoms from her infection, such as a “foggy brain” and a light snore when she sleeps. Feeling embarrassed at first, Cruz said she only confided in two friends that she’d contracted COVID-19. One of them, who is 19, disclosed that she’d also been infected.

“She’s super paranoid,” Cruz said, noting that her friend only goes out for things like groceries or to her mom’s house.

“There’s this stigma that if you get it and you’re young, you’re fine,” Cruz said. “Obviously, that’s not the case.”