Health officials and emergency workers painted a dire picture of the situation inside Long Beach hospitals today, as ambulances struggled to keep up with a crush of patients and the city activated a “mass fatality” plan to back up local morgues that are nearing capacity even as more critically ill patients flood local medical centers.

“The COVID crisis in Long Beach is not getting better; it’s getting worse,” Mayor Robert Garcia said in a news conference Wednesday. “We have to just recognize that we are living through the biggest challenge we have ever faced as a community and a city.”

A doctor at St. Mary said some patients were being treated in the ambulances that brought them because there was no room to unload them at the emergency room. Other patients were in beds lining the hallways, said the source, who asked not to be named because the person was not authorized to speak publicly.

Two other facilities, Long Beach Memorial and College Hospital, have already deployed mobile hospitals to create extra space. Los Alamitos Medical Center and College Hospital have added extra refrigerated units to back up their morgues, according to the city manager’s office.

A refrigerated trailer in the middle of the parking lot of College Medical Center in Long Beach on Tuesday, Dec. 23, 2020. Local hospitals are using these trailers as mobile morgues. Photo by Thomas R. Cordova.

Already in their busiest time of year because of flu season, ambulances in Long Beach have been slammed with calls for patients with COVID-19 symptoms or confirmed test results.

As a result, ambulances are being forced to offload patients at the nearest available hospital—regardless of patient requests—to get emergency crews back into service faster, according to Long Beach Fire Department spokesman Jake Heflin.

Some hospital emergency rooms have overflowed at times, forcing ambulances to go elsewhere, but if all of the nearby ERs fill up, ambulances simply have to wait until there’s space.

Across the county, 96% of hospitals recently have had to divert some ambulance traffic, something that would typically only happen at a third of hospitals at this time of year, County Health Services Director Christina Ghaly said.

At times, ambulances have had to wait hours to unload critically ill patients, according to Ghaly. “COVID-19 is absolutely rampant in Los Angeles County,” she said.

At Kaiser Permanente’s medical centers in Downey and Fontana, videos show patients lined up in beds in hallways and while others wait in tents outside.

Nurses at St. Mary were caring for two to three times the normal number patients, while housekeepers were “scrambling 24/7 cleaning rooms,” according to the source at St. Mary. 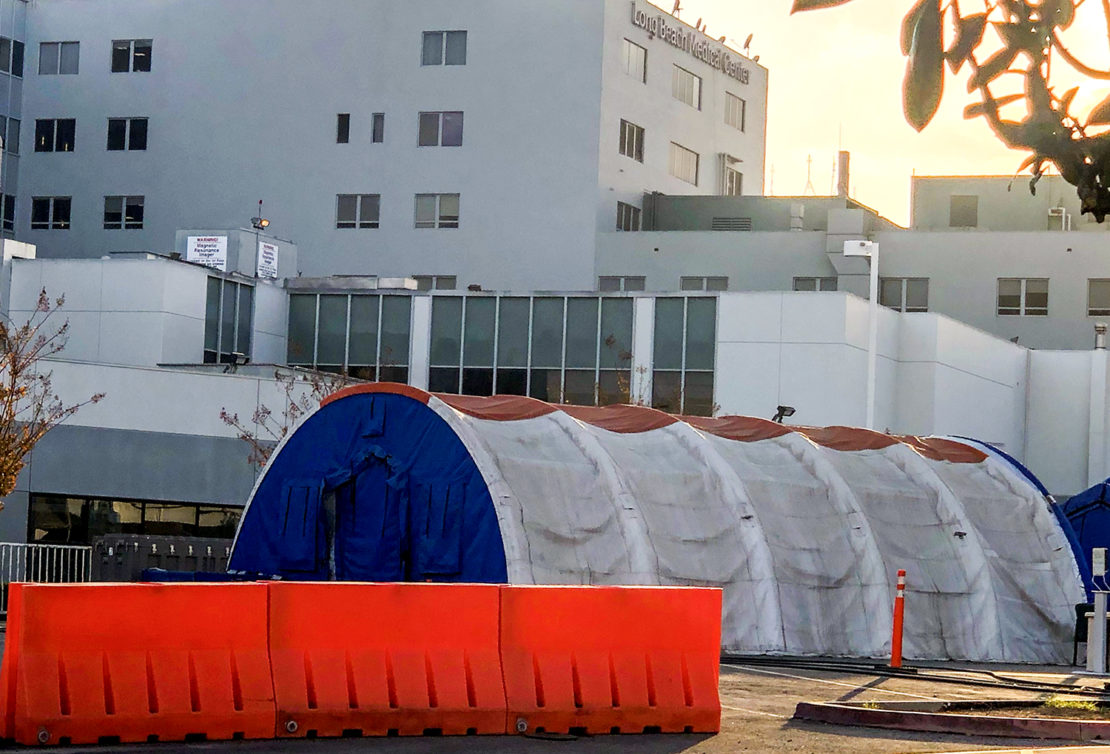 Long Beach Memorial sets up tents in the back of the hospital due to the COVID-19 pandemic in Long Beach Friday, Dec. 11, 2020. Photo by Thomas R. Cordova.

“We’re seeing a lot of challenges even seeing units clear out of the hospital while they wait for a bed or even a chair,” Heflin said.

A representative for St. Mary said the hospital and all others in the area are “extremely busy.”

“Their doctors and nurses are pleading for your support,” Garcia said as he implored everyone to stay home as much as possible.

Overall, the available capacity at local intensive care units in the city’s five nearby hospitals has dropped to 1.5%, according to the city, although that number can fluctuate quickly as patients die, are discharged or admitted.

The mass overflow at local hospitals this week has confirmed health officials’ worst fears as the number of COVID-19 cases and deaths continues to surge. And experts warn that the worst is yet to come if people ignore health orders and gather for the holidays.

In a grim milestone, Long Beach has reported two days of record coronavirus-related deaths, with eight on Wednesday, in addition to 14 deaths reported on Tuesday. In all, the city has seen 341 fatalities.

LA County on Wednesday reported 145 coronavirus-related deaths, the highest daily number since the start of pandemic, for a total of 9,016 fatalities.

The county also announced another 16,525 cases, while the number of hospitalizations soared to 6,155.

“You’re hearing from us and … every hospital and health care worker, we’re in really, really bad shape and the only way for us to stop being in such bad shape is for more people to start following the rules,” County Health Director Barbara Ferrer said. “The one thing everyone needs to do is stay home as much as possible.”

California has seen an unprecedented spike in COVID-19 cases and deaths. Health officials attribute the surge in part to Thanksgiving gatherings, which they said added explosive fuel to an already burgeoning wave of infections.

Garcia, who lost both of his parents to COVID, warned that the city and region could soon plummet into a third surge because of gatherings over the Christmas holiday that would further overwhelm the health care system.

“We are heading toward a catastrophic event at our hospitals,” he said.

Health officials pleaded with residents to endure the stay-at-home order for just a little longer as vaccines begin to roll out.

Long Beach this week received 11,600 doses of the Moderna vaccine to be used on essential health care workers and nursing home residents and staff.

The city began its mass vaccination effort on Friday with thousands of Pfizer doses. The Moderna vaccine is expected to be distributed in nursing homes beginning Dec. 28.

The city expects to have all essential workers in hospitals vaccinated by the end of the year.