In the hours before the crash that killed Gabriel Garate Tuesday evening, the 7-year-old boy was as happy as ever, his family said.

Gabriel’s aunt picked him up from class at around 3 p.m. and they headed to Holé Molé where he ordered tacos, one of his favorite foods, his family said. A couple of hours later, his aunt dropped him off at his father’s house in Long Beach. Gabriel wanted to play baseball at Stearns Champions Park, so he and his father, Francisco Garate, started walking the few blocks to the diamond.

As they crossed Lakewood Boulevard, the driver of a 2005 Dodge pickup truck failed to yield for them as he made a left turn, striking Gabriel, according to police. Gabriel died in the roadway with his baseball gear next to his body, his family said.

“All I could do was hold him in my arms and tell him, ‘My baby, my baby,'” Francisco said Wednesday afternoon while fighting back tears. “He was my little buddy. We did everything together.”

Police have since arrested the pickup truck’s driver, 57-year-old James Barnes, on suspicion of felony vehicular manslaughter with gross negligence. Barnes, who is free on $50,000 bail, declined to comment when contacted by the Long Beach Post.

But Gabriel’s family, who gathered at a roadside memorial Wednesday, said they’re left trying to process the tragedy that seemed to come out of nowhere as Gabriel and his father walked across the street to the park.

“It was a green light,” Francisco said. “We were doing everything right. It should have never happened.”

Gabriel was born on March 13, 2015, in Torrance. He lived in Long Beach with his father and attended Bixby Elementary where he was supposed to attend the second grade in the fall.

“He was such an amazing kid,” Francisco said. “He was smart but he had a goofy personality.” 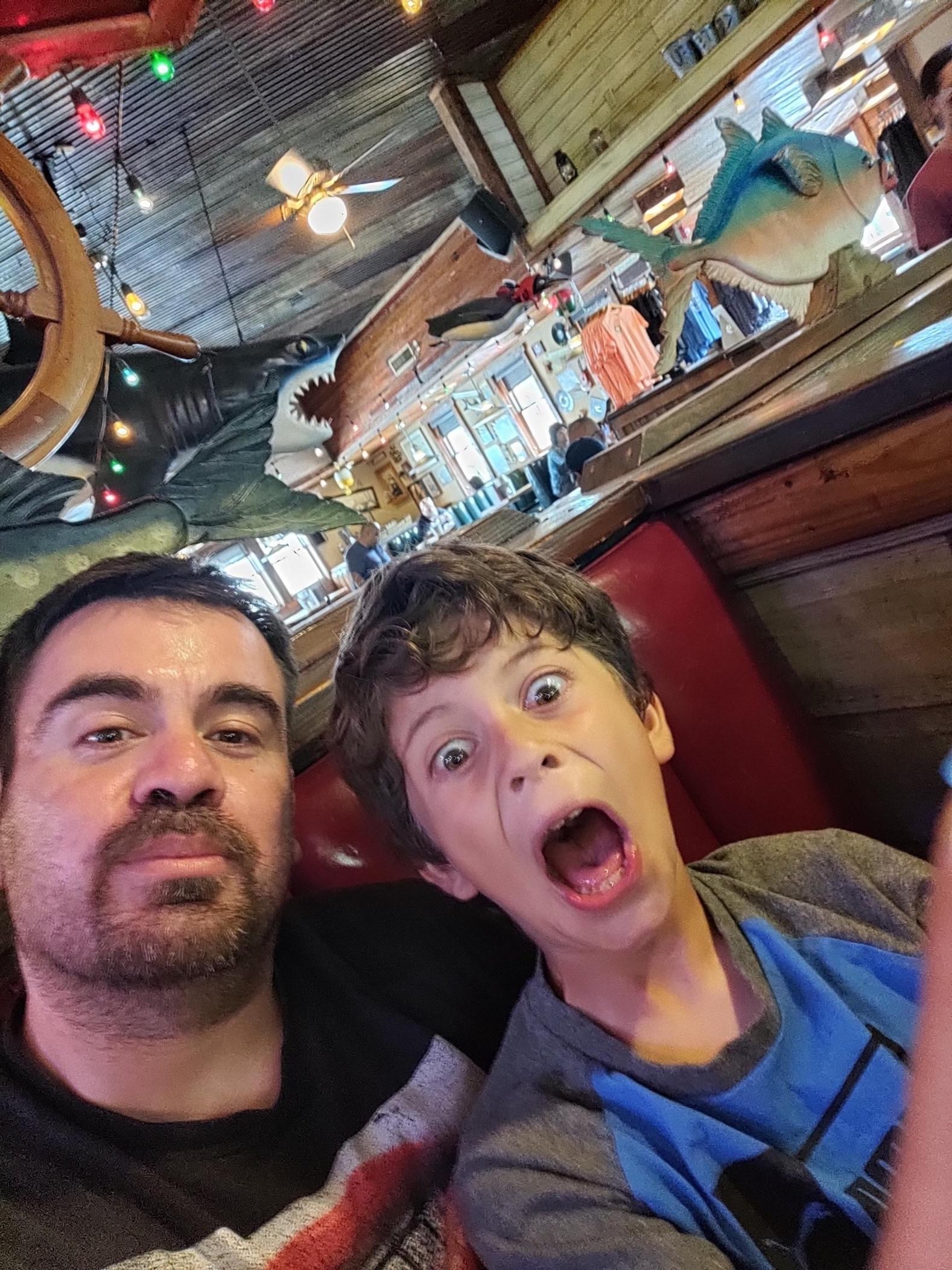 Growing up, Gabriel’s hobbies often changed. By the time he turned 7, he knew he wanted to pursue baseball, but he also dreamed of working on video games. He spent many days playing video games with his father, his family said, including Minecraft, Fortnite and Dark Souls.

“He would say, ‘Dad I’m so good. I’m seven years old and I passed Dark Souls, by the time I’m an adult, I’m going to be a gaming god,'” Francisco said.

His aunt, Jennifer Engel, said Gabriel was unlike other kids his age. She said he would often talk about topics that felt advanced for a kid.

“He was just such a happy kid,” said Engel, who was overcome with emotion after the loss of her nephew.

Since the crash, neighbors have been paying their respects at a makeshift memorial on the sidewalk near the crash.

Wednesday afternoon, more than 20 of Gabriel’s family members and loved ones gathered there for a vigil. They cried, embraced each other and sang songs in his honor as cars sped past on Lakewood Boulevard behind them.

Sobbing, Gabriel’s grandmother cried out in Spanish: “Ay mi bebe, ay mi bebe,” over and over again: Oh my baby, oh my baby.

“Solo lo quiero agarrar,” she plead out. I just want to hold him. 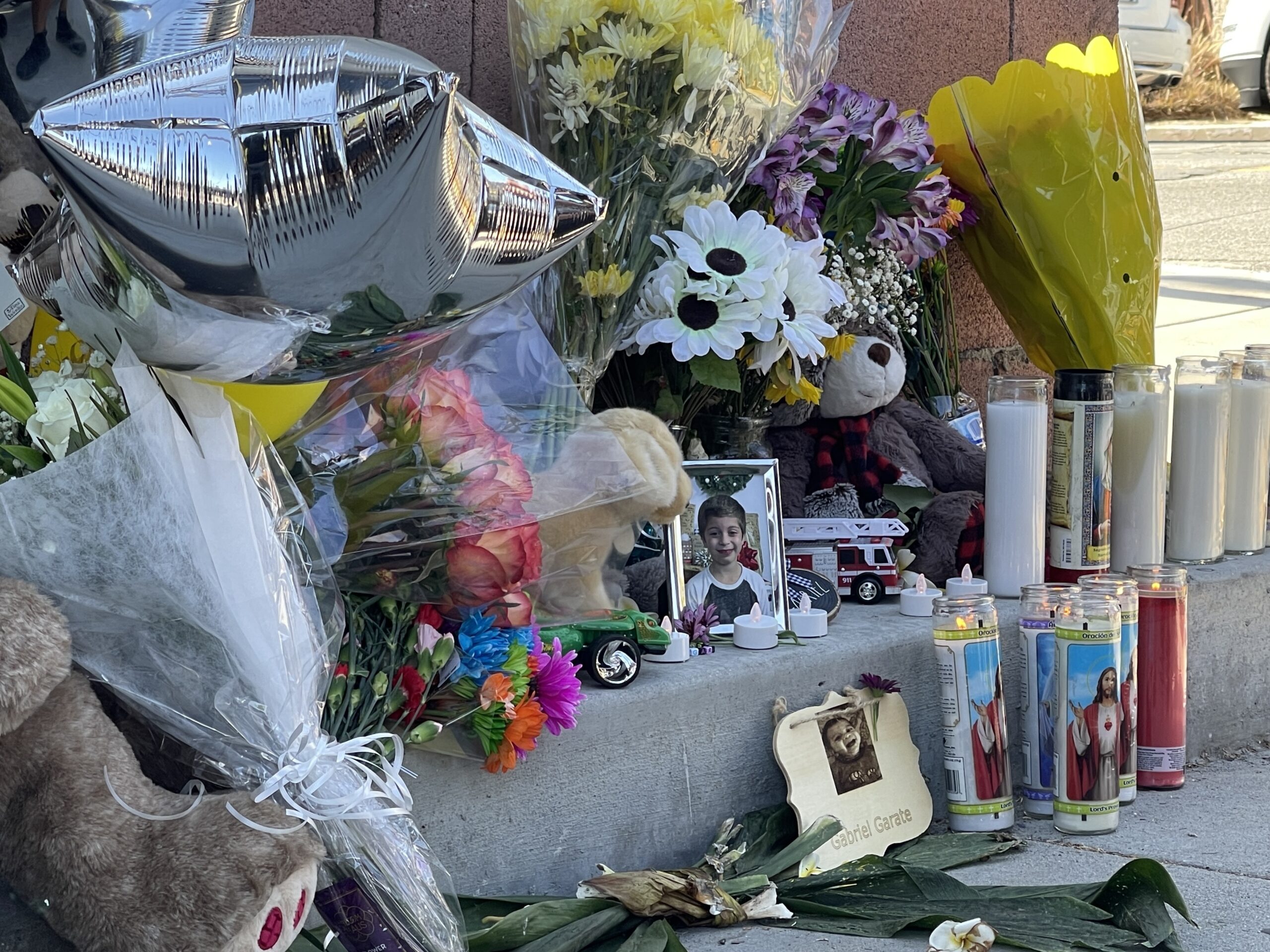 A makeshift memorial in honor of 7-year-old Gabriel Garate who died July 26 after being struck by a driver in East Long Beach. Photo by Fernando Haro.

7-year-old killed while crossing street with his father, police say; driver under arrest