You’ll recall the words of Vladimir Lenin, in his “About Our Revolution” in 1922, citing Napoleon as saying: “On s’engage et puis … on voit,” loosely translated as, “One jumps into the fray, then figures out what to do next.”

Accordingly, in this Year of Fray, in this week of the Sturgeon Moon, we fumble through another year’s worth of news stuffed into seven days, including a video call on the budget from the city manager’s garage, a smackdown on the verbosity of certain councilmembers, a few puzzling rambles through the otherworld of social media—did you know City Council candidate Robert Fox was jailed with Joan Baez?—and a normally unified-to-the-point-of-dull school board defending its rich racial diversity.

In fact, at the risk of losing paying subscribers, let’s start with the Board of Education, a ho-hum elected body that heretofore has been neglected by The Backroom like the perpetual “good kid.” Almost all of its votes have been unanimous—its members go through rubber stamps like The Backroom goes through a pack of Parliament Lights—and meetings typically last an hour, give or take. Even the teachers union appeared pleasantly agreeable.

Now, in Jill Baker’s first official week as superintendent, a Facebook group of parents and teachers has gained over 5,000 followers, many of them angry or confused over what’s happening with classes this fall; the newly selected president of the Board of Education wrote an op-ed announcing her Mexican heritage after another Latino member was passed over for the job; and a soon-to-be retiring member, Felton Williams, advocated for a campaign to rename Jordan High after … Felton Williams.

The board on Wednesday did agree to empower a committee to look at the names of schools in the wake of the current reckoning over the country’s racial history, and after a petition circulated urging the district to change the name of Woodrow Wilson High.

David Starr Jordan, the founding president of Stanford University, was a fan of eugenics—along with Robert A. Millikan and Luther Burbank—and his time as the namesake of the North Long Beach high school has likely come to a close.

We’re not saying Williams is undeserving of the honor; he was elected in 2004 as just the second African American on the board, he has a doctorate in education and is regarded as a respected leader in Long Beach.

But it takes a special something to lobby so brazenly for oneself, which was pointed out by the moderator of a Black Lives Matter group on Facebook, who urged supporters to show up to Wednesday’s meeting. 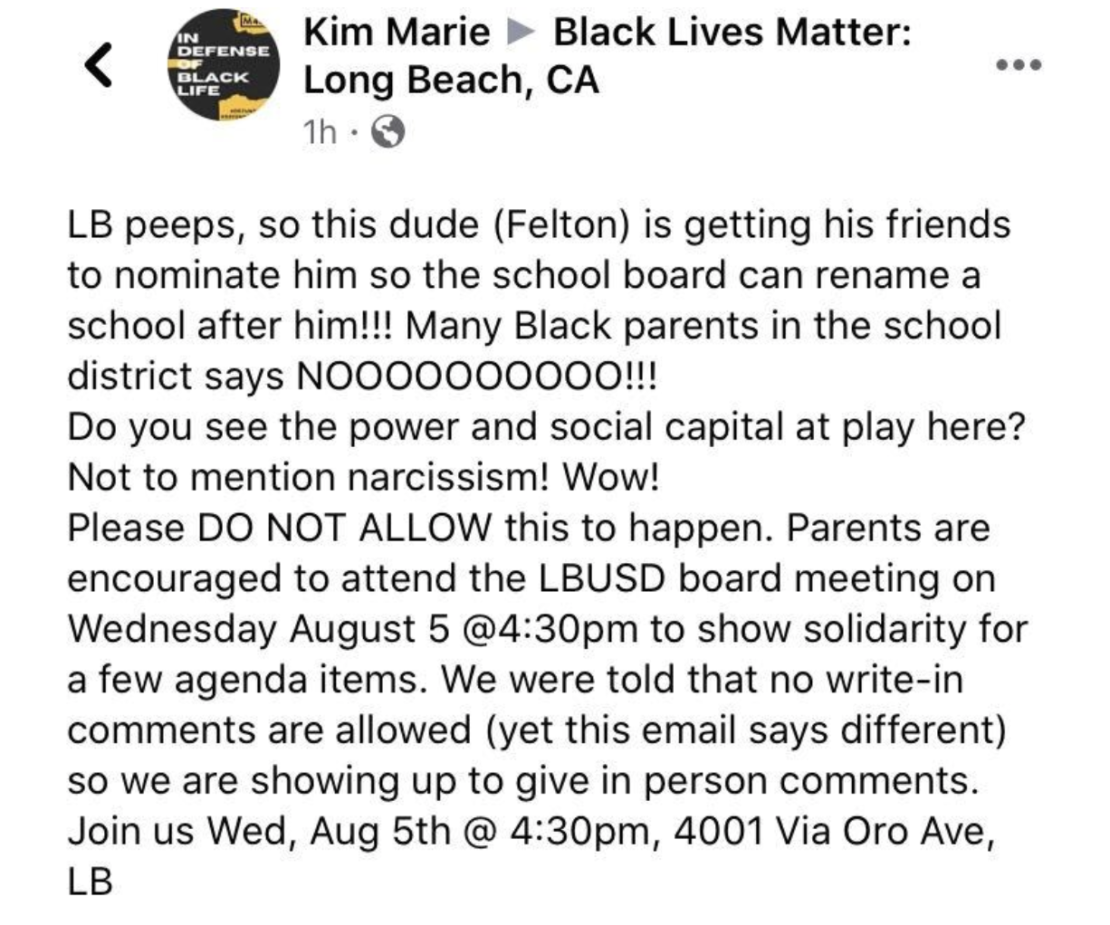 Meanwhile the newest school board member, Juan Benitez—who, a week ago, was thought to be the only Latinx member of the board—is the center of another stir. A group of influential politicos, including Long Beach Mayor Robert Garcia, excoriated the board members who selected Diana Craighead as president over Benitez, who had been the vice president.

These largely ceremonial titles have taken on new significance in this very tense moment, so significant that Craighead revealed her own Mexican American roots in an awkward statement—followed by similar statements by her colleagues Jon Meyer and Williams, both of whom are retiring—arguing the decision had to do with experience, not race.

Meanwhile the formerly docile Teachers Association of Long Beach has clearly picked sides behind the Benitez cohort. In perhaps the first sign of fissure on the board, Benitez was the only one to express misgivings about Baker’s raise in contract negotiations last May (though he abstained from the vote; come on, if you’re going to oppose something, oppose it with a loud NAY!).

The union, already whispering of a potential strike over the requirement that teachers return to the classroom, will latch on to the Baker raise like a barnacle on the side of a sinking ship if the district tries to monkey around with teacher salaries, we predict.

And the last board member, Megan Kerr, notably gave up her post as vice president at Wednesday’s meeting so Benitez could at least retain the VP gig, which, we remind you, means nothing in practice. And, in yet another twist, Benitez “respectfully declined” the position, which led Meyer to nominate Williams, who in turn nominated Meyer, who accepted, which led legal counsel to caution that the board was acting outside its charter since Meyer is retiring in four months, and the whole thing is a mess.

We heartily welcome you to The Backroom, LBUSD—all it took was a health pandemic, protests over racial injustice, an economic collapse, and, the key ingredient in all politics, a sprinkle of hubris.

The lot that hell hath brought

Urban Dictionary defines the phrase “the gift that keeps on giving” as a veneral disease: “you get it from someone, and you can give as many as you want,” which in our view, applies equally to social media.

Since in-person contact with constituents for the November election is off-limits, candidates are fleeing to the Interwebs for support, with (very) mixed success.

First, let us say, out of love, we’re a little concerned about both candidates for the Council District 2, which covers the Downtown waterfront and Alamitos Beach areas.

In a Zoom chat last week with the outgoing occupant of the office, Cindy Allen was lobbed a giant fluffy softball: What issue spoke to you most in your decision to run for office? Allen yammered on with Sarah Palin-esque evasiveness about her love for socializing, like meeting with people, talking with people, social butterflying with people—the stuff movements are made of.

Also facing sustained questions over her city of residence, Allen has taken to posting videos from the top of her “home condo,” as she describes it, in the Aqua Towers Downtown.

Her competitor, meanwhile, is not lacking at all for content. In response to a question about what he’d do for communities of color, Robert Fox wrote a roughly 750-word treatise on the scope of his achievements, including working in a Jewish-owned restaurant, being a scholar of Chinese culture, spending a night in jail with Joan Baez and his work to build “a new and brilliant ‘Star Trek’ like future.”

He concluded: “I hope I have taken enough time to explain my position.”

The inquirer responded, in part: “Thank you for taking the time to tell me your life story. That really wasn’t what I was asking for.”

When we think of how empty and hollow our life was before social media, we just break down and cry.

CD2 truly is, and always will be, the gift that keeps on giving.

After all we’ve done for City Manager Tom Modica, he didn’t take a single one of our suggestions for how to solve the city’s budget problems.

But, great news! The city launched a fun little budget tool that allows us all to get involved!

How do you solve a $30 million deficit? It’s easy—how many fire engines would you cut? How many city jobs? What about programs at city parks? Would you raise fees? We can cut all kinds of things and sleep like a baby. Except the Post’s budget. The First Amendment is not for sale, beloved reader.

As Councilwoman Stacy Mungo aptly pointed out at Tuesday’s council meeting—before being silenced by an exasperated Vice Mayor Dee Andrews, who dropped the hammer on long-winded shares from the dais—the options are sorely lacking.

And the entire exercise feels a tad pedantic (our word, not hers). Where, for example, are the options for those fancy accounting gimmicks, the ones that let you move millions onto the spreadsheet for next year?

Perhaps we’re being overly-cynical, but we wonder whether the city just wanted to conduct an opinion poll on who likes cops versus firefighters, and whether libraries are preferable to parks. Why else would our gender, race and age bracket matter?