All of the migrant children who had been housed at the Long Beach Convention Center have now departed, a week ahead of schedule, the mayor announced Friday at a media briefing.

A total of 1,538 children passed through the doors of the local convention center Downtown, one of several sites across the country being used to temporarily house youth as the number of children arriving at the border with Mexico swelled beyond the capacity of government facilities.

The local shelter housed both boys and girls, including siblings and children as young as 3, officials have said. The shelter was initially slated to close by Aug. 2, as conventions are set to resume shortly after.

Mayor Robert Garcia said crews were breaking down the facility inside as the media briefing was taking place. He added that by Aug. 4, the facility would be ready for use other than a center to house migrant children.

The children stayed in Long Beach an average of 19 days, according to Garcia.

“We could not have been more proud to have played our part in a much larger national effort,” Garcia said.

Medical care was constantly provided for the children courtesy of doctors and nurses from UCLA Health. Willam Dunne, administrative director for UCLA Health, said the children also received mental health support given the treacherous journey some of the children experienced.

“Many of them had difficult journeys just to get to the United States,” Dunne said.

“We were here when the children first arrived,” Yliana Johansen-Mendez, Immigration Defenders legal services director, said during the briefing.

She said the children who have been reunited with family will continue to get support as they undergo immigration proceedings and hearings in court. 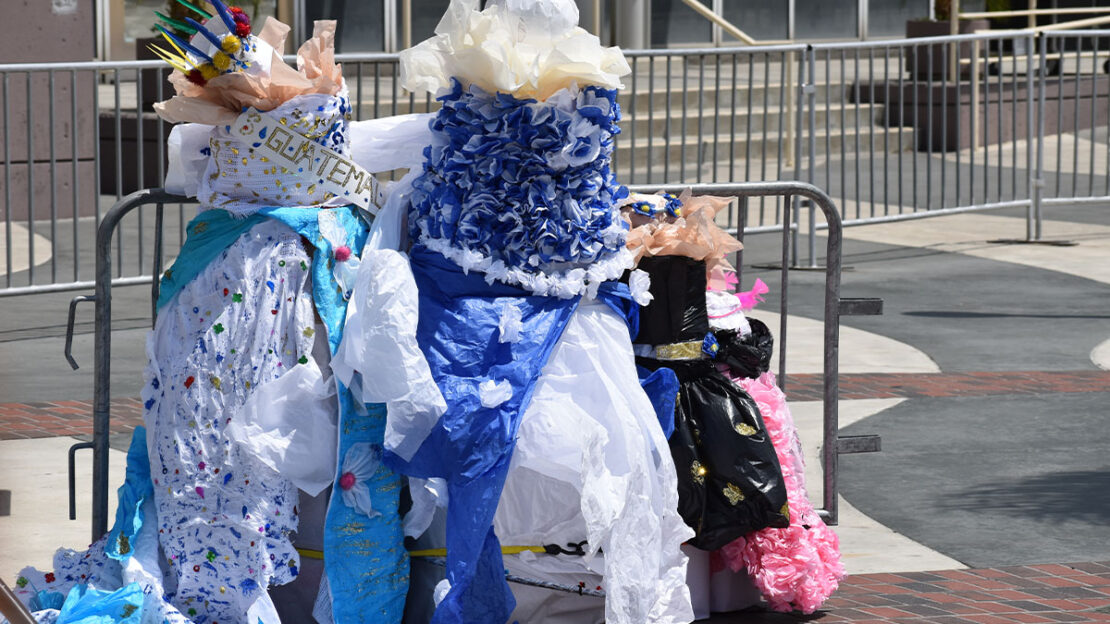 Girls who stayed at a migrant center in Downtown Long Beach designed and made dresses during their stay at the shelter that were on display during a media briefing on Friday, July 23, 2021. Photo by Sebastian Echeverry.

Since April 22, when the shelter opened, few details were publicly known about life inside the shelter for the children.

Court papers filed by immigrant-rights attorneys included a short account from the perspective of a 17-year-old girl from El Salvador who was pregnant and staying at the shelter. She said she felt “really sad” being there but suggested that the children were being treated well inside the shelter.

The U.S. Health and Human Services Department tapped Long Beach officials back in April to lease the convention center to temporarily house migrant children as U.S. Customs and Border Patrol agents reported an increase of unaccompanied minors being detained at the border.

Health and Human Services is the responsible agency for sheltering migrant children after they’re transferred out of Customs and Border Protection’s custody. Officials had already used centers in Texas, and in other California cities such as San Diego.

A report from the Associated Press found that some migrant children experienced desperate conditions at other holding facilities across the country. The agency received reports of abuse that resulted in a handful of contract staffers being dismissed from working at the emergency sites this year, an official told the AP on condition of anonymity.

Federal and local leaders, including Garcia, hailed the shelter in Long Beach as a national model to follow, however, it was intended only to be open until Aug. 2. Garcia said that the city was not approached by the federal government for an extension at the facility.

‘I am really sad being here’: Court filing gives a glimpse of life inside Long Beach migrant center