One of the city’s most notable and venerable buildings is the Lafayette in Downtown’s East Village, where for nearly 100 years it’s been admired for its architecture and its elegance.

The historic landmark is actually three buildings. At its southern end is the Campbell Building, built in 1928 in the Spanish Baroque form with that style’s abundance of ornamentation. The 11-story Campbell Building originally was filled with luxury apartments.

The following year, the noted Long Beach architectural team of Cecil and Arthur Schilling (whose credits include Hollywood’s Grauman’s Chinese Theater), completed the Lafayette Hotel, considered the finest example of Art Deco architecture in Long Beach with design details that Cecil Schilling had picked up from his intensive study of the style that included visiting the International Exhibition of Modern Decorative and Industrial Arts at the World’s Fair held in Paris in 1925. In its years as a hotel, it hosted contestants in the Miss Universe pageants, which were held in Long Beach from 1952 to 1959, as well as Rose Bowl teams and an array of other notables. 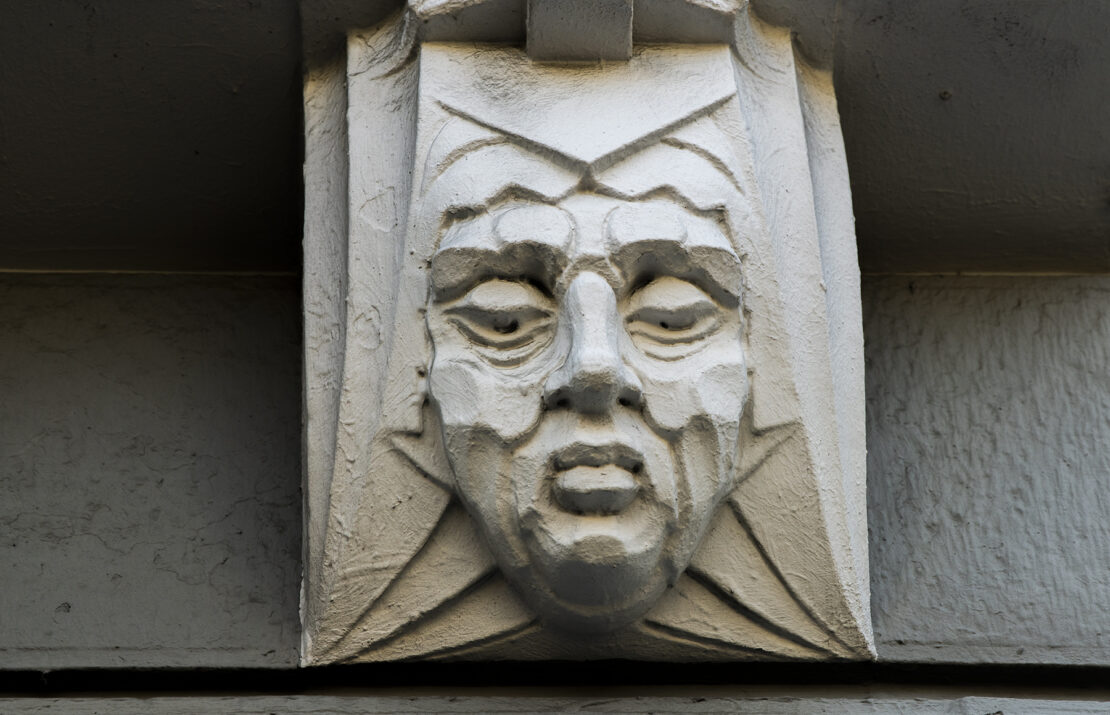 An Art Deco detail from the front of the Lafayette in the East Village Arts District. Photo by Thomas R. Cordova.

Time passed. A newspaper headline montage would include spinning front pages devoted to the Great Depression, the Long Beach Earthquake, the attack on Pearl Harbor, events of the second world war in Japan and Europe, and the victories in both theaters of operations.

In 1948, the Broadway Building on the corner of Broadway and Linden Avenue was completed as a major expansion of the Lafayette, designed in the International Style, incorporating influences of Streamline Moderne. And that particular section of the Lafayette complex is the reason I’ve gathered you all here today.

The eight-story Broadway Building, which included a variety of clubs and restaurants, was topped with the aptly named Panorama Room, an elegant high-dollar restaurant, bar and banquet room, which was one of the premier restaurants in the city.

In 1979, the expansive Panorama Room high atop the Broadway Building was also converted to a huge (and panoramic) pair of penthouses. Their current owner, Joe Marrs, has just put both on the market as a brace of beautiful and spacious penthouse units with large private patios. 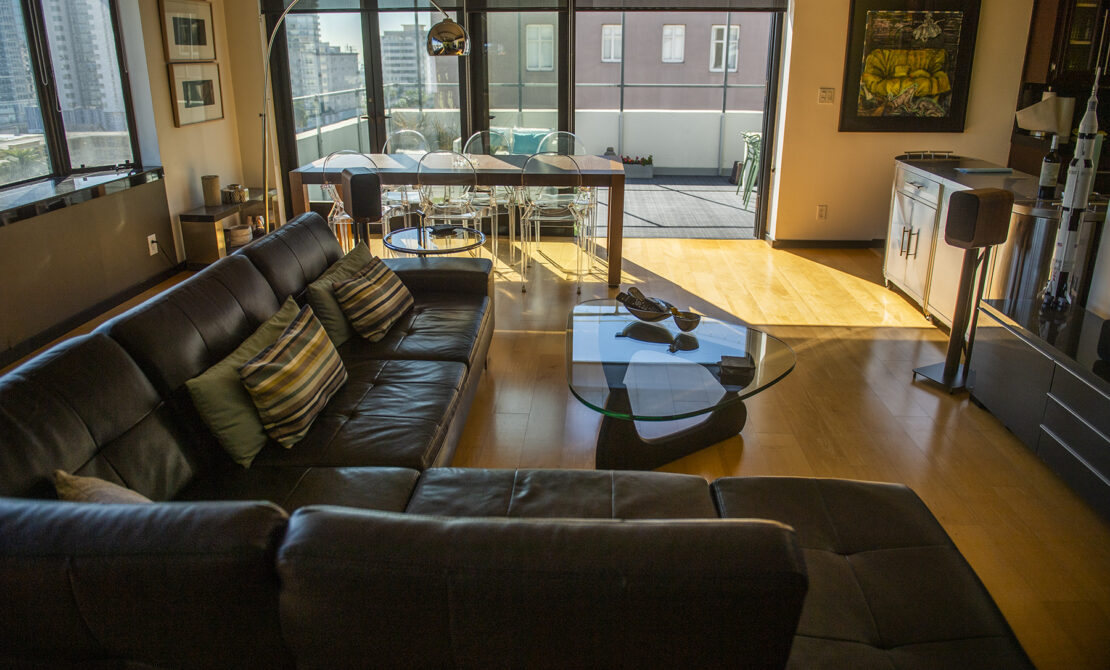 The living room of Penthouse 802. Photo by Thomas R. Cordova.

Both units, upgraded and decorated by Marrs, are packed with upscale features, from historic touches to high-end appliances and flooring. Penthouse 801 features polished black concrete floors throughout the unit; a Nest smart thermostat; a master bedroom with American maple engineered hardwood flooring and extra-tall French doors opening to a private terrace and a walk-in closet with washer/dryer. Its second bedroom also has access to a terrace. A historic touch is a round column feature corner of the Streamline-style building in the great room.

Penthouse 802 has much of the same; what’s chiefly different is its kitchen with dark mahogany-stained cabinetry and a floating stainless steel island bar.

Both, as you might expect, have spectacular views from the rooms and terraces, clear to the Hollywood Hills (when air quality allows) to the north and Saddleback to the east, along with the city lights of Downtown and beyond. 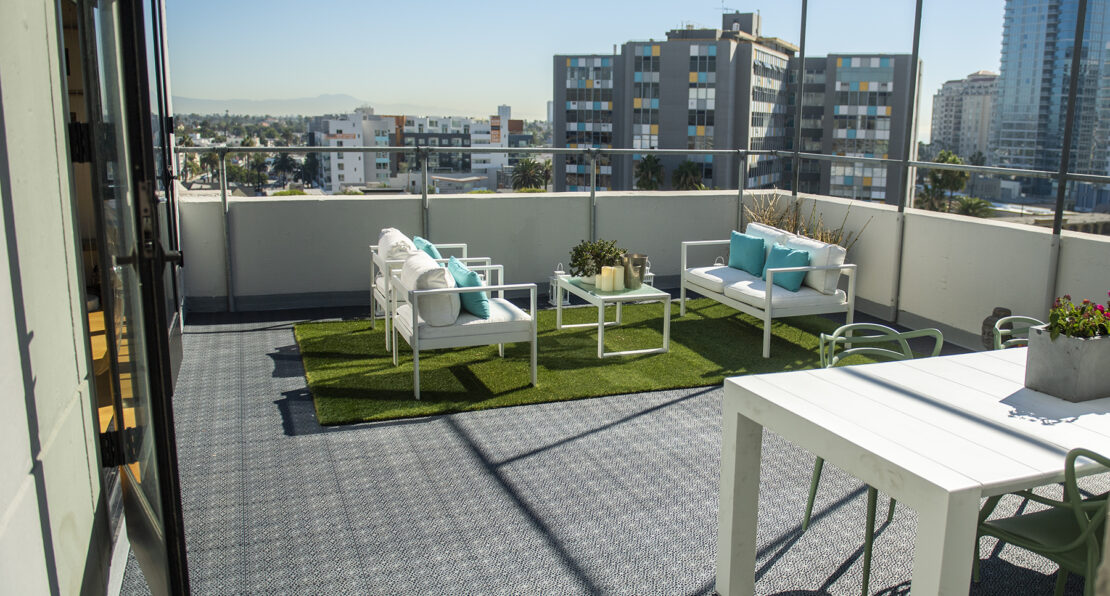 The outdoor patio from Penthouse 802 of The Lafayette at 140 Linden Ave. Photo by Thomas R. Cordova.

Further, the Lafayette’s location is ideal for city living, with plenty of great restaurants within a short walk, including Padre, Utopia, Thai District, the Breakfast Bar and others. Excellent coffee abounds, too, in the neighborhood, at places like the East Village Cafe, Rose Park Roasters and Pop’s Java. And if you want to drive, you won’t lose your spot. The penthouses each come with parking for two cars.

Although the two units are offered separately, they work well together as one big residence (albeit with a surplus of kitchens, but that’s easily dealt with if you even consider that a problem) of more than 3,000 square feet and 1,500 square feet of private outdoor space—to say nothing of not having to grapple with a neighbor of unknown quality, other than likely having a fair amount of money.

The two units can be made one with no demolition; they’re easily connected by a hallway/gallery. All it takes is a couple of million dollars and the not-incidental HOA fees of $606.24 per month for Penthouse 801 and $706.58 per month for 802.

Marrs has owned the penthouses for 30 years as well as other properties in the city. “I’m trying to downsize,” he explained. “Life has its chapters. This has been a 30-year chapter.”