With neighborhoods split in past redistricting, some want a new commission to fix old mistakes • Long Beach Post News
- ADVERTISEMENT -

When Long Beach last drew its City Council district lines in 2011, the border between the city’s 7th and 8th districts was arguably the most contentious battle with council incumbents fighting for the rights to the Bixby Knolls and Los Cerritos neighborhoods, the latter of which was split in a divisive vote.

A proposal in 2011 by former Councilman James Johnson sought to split the Atlantic Avenue business corridor in two to unite the part of Bixby Knolls east of Atlantic with smaller communities like Bixby Terrace, Bixby Highlands with areas that Johnson already represented south of Bixby Road including California Heights.

Gabelich was nearing the end of her final term as councilwoman and found herself pitched in a fierce public battle to try to retain the shape of the district that she had helped to revitalize.

“It was hell,” Gabelich said this week, recounting the redistricting process from 2011. “It was absolute hell.”

A compromise map was ultimately approved with the 8th district holding onto the Bixby Knolls neighborhoods west of Orange Avenue, however, the plan sent the southern half of the Los Cerritos neighborhood into the 7th District. An attempt to recall Johnson later that year ultimately failed after a signature-gathering effort was suspended.

The lines created a group of residents, some of whom jokingly self-identify as “SOB’s” (South of Bixby) who are now hoping the city’s newly created Independent Redistricting Commission can help fix the wrongs they feel were created by politicians 10 years ago. 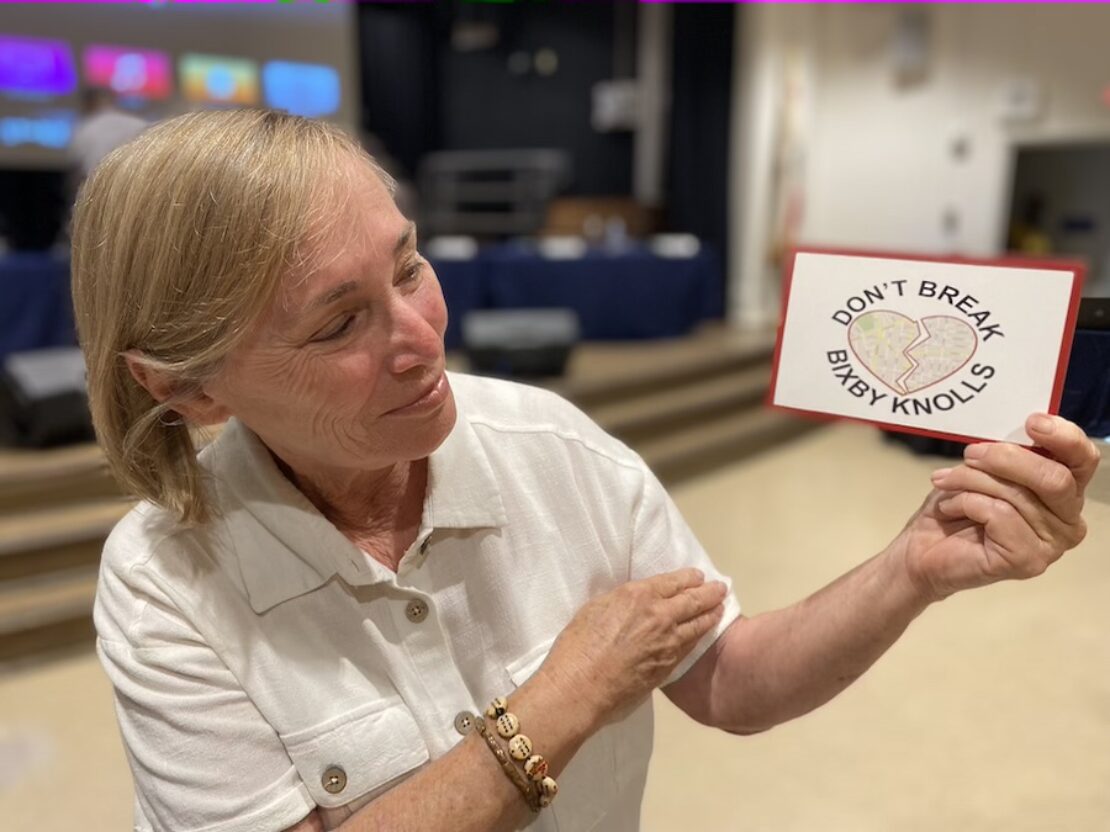 Former Councilwoman Rae Gabelich holds up a postcard that was circulated to community members during the 2011 redistricting process to get residents to pressure the City Council to keep Bixby Knolls together. Photo by Jason Ruiz.

Bob Gill is the president of the Los Cerritos Neighborhood Association which includes NOBs (North of Bixby) and the SOBs to the south.

The association has been around for about 80 years and Gill said it’s very active with many well-attended events including community concerts and parades that regularly draw about 1,000 people. Some of the events are in the 7th District and others are in the 8th, but they’re all in the Los Cerritos neighborhood.

“The plus has been we have two City Council offices to discuss things with,” Gill said. “The minus has been that our influence based on size has been reduced.”

Gill believes the current lines went against the rules established by the City Council in 2011 that prohibited the splitting of parks. The current southern border of the 8th District cuts through Los Cerritos Park.

Gill said he’s hopeful that the neighborhood can be made whole again but is concerned about the window of time in which the public will be allowed to give input.

The commission’s process is being delayed by the release of Census data, which is not expected until the end of September. The commission then needs to host public meetings, draw new lines based on new population data and approve new maps by December, the current cut-off date for the maps to be used in the June 2022 elections.

But when it does begin, the line-drawing process the 7th and 8th will likely be intertwined again.

An illustration showing how district lines have shifted in Long Beach over the decades. Illustration by Dennis Dean.

The 7th District has historically been one of the most in-flux districts. At one point in the 1990s, Cambodia Town, which sits squarely in Central Long Beach, was part of the 7th, which has typically included parts of West Long Beach.

The 7th, 8th and 9th districts all have projected population growth, according to American Community Survey data, with the three districts expected to add about 3,000 residents when the Census data is released in September.

Combined with a projected loss of nearly 1,200 residents in the 6th District that is located immediately south of all three, there could be substantial changes when a final map is presented in December.

While the fluctuations in the 7th District’s border in 2011 were mild when compared to the 1991 map, they didn’t come without controversy that still has some residents roiled over how their neighborhoods were split.

Harold Dela Cruz, an organizer in West Long Beach who recently filed an intention to run for City Council in 2022, said that the current district lines disenfranchise the communities in the 7th that are west of the 710 Freeway.

Dela Cruz said that the needs of West Long Beach don’t align with Cal Heights or Bixby Knolls, which are generally more affluent and have more community-serving businesses than his neighborhood, and a fraction of the environmental pollution caused by the Port of Long Beach and adjacent businesses.

“If you were able to combine the westside we could battle the industry as one,” Dela Cruz said.

There have been calls to consolidate the communities west of the 710, some of which are currently in the 1st district, and Dela Cruz is supportive of that idea but said the lines need to be drawn more carefully this time around.

“I think it has to be done in a very delicate way,” Dela Cruz said. “But right now, we’re not connected and there’s a lot of distrust.”

It’s still unclear what the commission will use for a starting point when it begins drawing lines. It has the choice to start from scratch or use existing lines as a model, something that has already become a political lightning rod.

John Mosquera owns Derricks on Atlantic in the 7th District and hopes that the southern end of the Atlantic corridor can be united with the northern half in the 8th District, where he says a more organized business corridor exists.

The last round of redistricting left a sour taste in Mosquera’s mouth but he’s cautiously optimistic that this cycle will be guided by the community rather than being politically driven. And the community needs to get involved, Mosquera said.

“This is our representation, this is our government, this is what we build on,” Mosquera said of the redistricting process. “To say you don’t care…I can’t accept that.”