'This can't be happening': Family of man, girl killed after pickup truck crashed through their apartment in shock • Long Beach Post News
- ADVERTISEMENT -
Help us light up the city; Add your home to the 2022 Holiday Lights map. CLICK HERE

Esnelia Palacios was ready to go to bed around 9 p.m. March 1, when she suddenly had an urge to sweep the bathroom in her family’s North Long Beach studio apartment. Her husband Jose and their 3-year-old daughter Samantha slept peacefully in the bed under the apartment window facing the 6600 block of Rose Avenue.

Their 16-year-old son Salvador sat nearby with his headphones on until Esnelia called him into the bathroom to help her dust a rug.

That’s when they both heard the sound of screeching tires outside.

Esnelia shrugged it off. She had lived with her family in the complex for 18 years; to them and several other families on the block, it was normal to hear a commotion coming from the bar less than 10 yards up the street, which neighbors have since deemed a “menace” to the community.

The screeching noise subsided, as if the driver had left the area, Esnelia recalls—and yet, the sound of a motor grew closer. A moment later, a truck crashed into her small apartment, stopping inches away from Esnelia and her son. 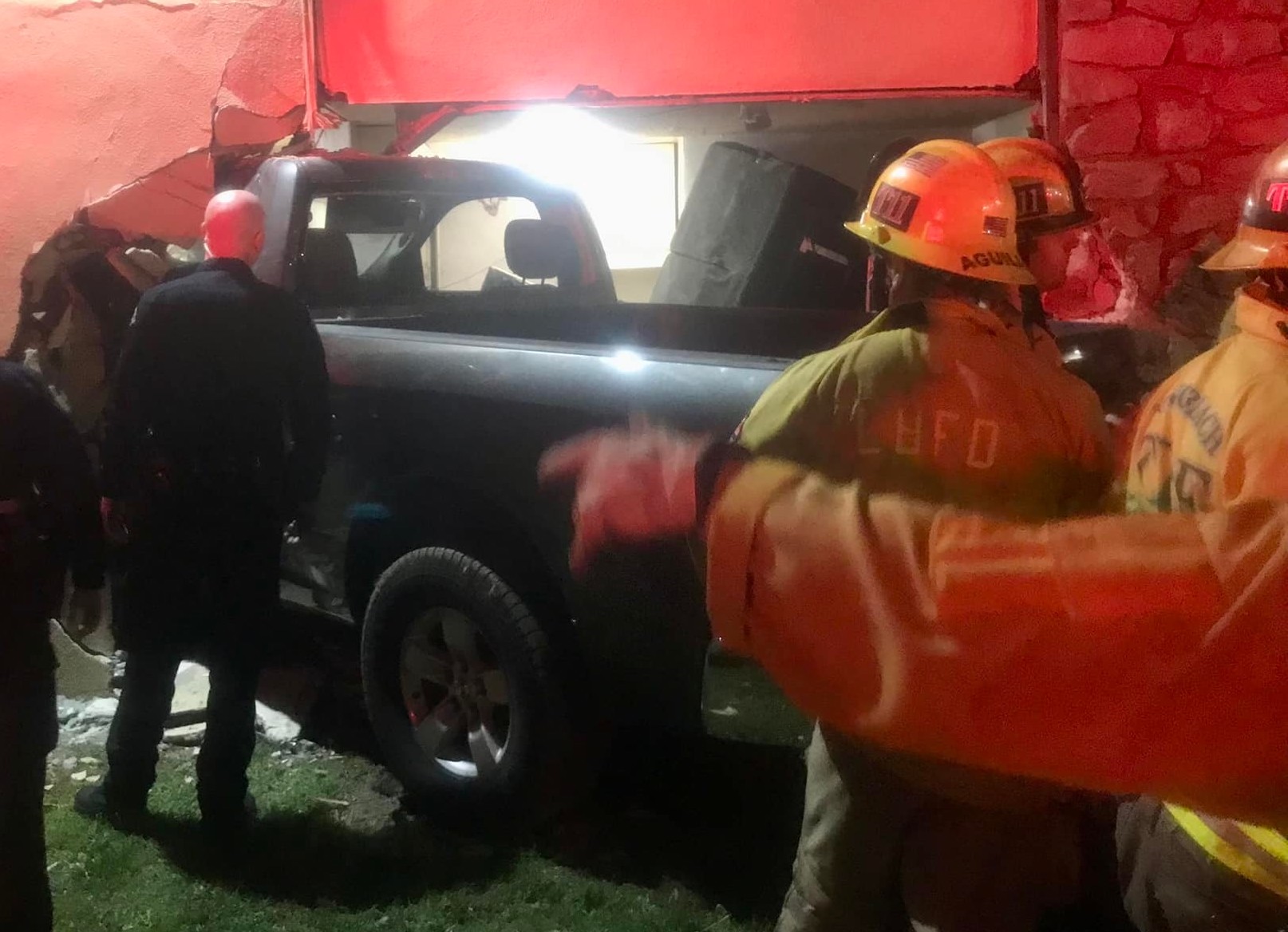 A pickup truck crashed through the wall of an apartment in North Long Beach on Tuesday, March 1, 2022, killing two people inside. Photo courtesy the Long Beach Fire Department.

Images show the truck heading down the 6600 block of Rose Avenue before the driver swerved off the road and into the Palacios’ home. The impact killed Jose Natividad Palacios, 42, and 3-year-old Samantha Palacios.

Jose was pronounced dead at the scene after being pinned under the truck for several hours. Samantha was taken to a local hospital, where she died of her injuries.

When Esnelia exited the bathroom, she says all she could see was darkness, rubble and a truck with wheels that seemed to be the size of tractor tires. 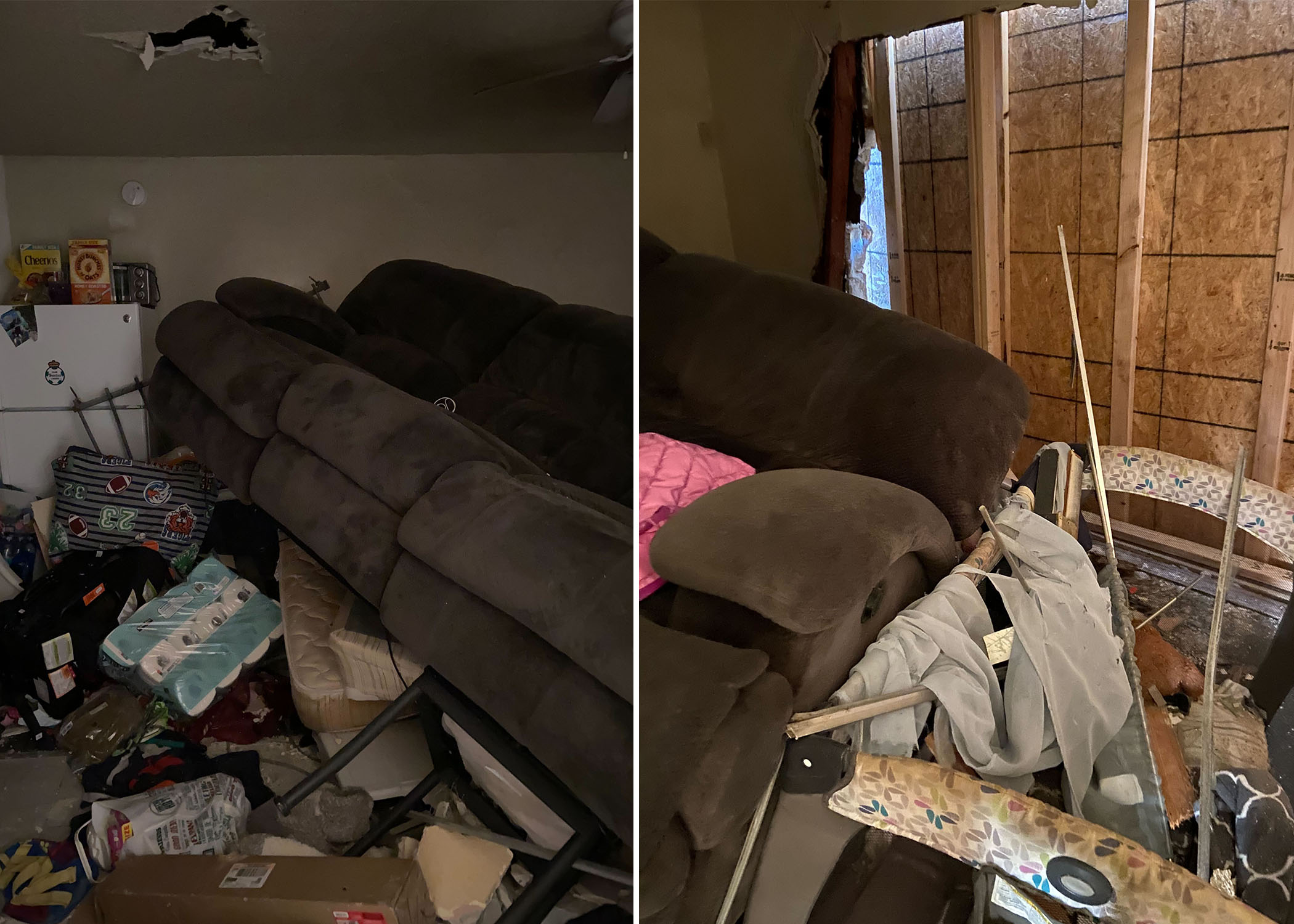 Side by side pictures revealing the damage from when the driver crashed into the home Tuesday, March 1, 2022. Photo courtesy of Esnelia Palacios.

The driver of the truck, who police have identified as 24-year-old Long Beach resident Octavio Montano Islas, stumbled out of the front seat and into the apartment, where he begged Esnelia for help.

Frozen in shock, Esnelia watched as a bleeding and allegedly intoxicated Islas realized what he had done, leaped over the wreckage and fled the scene on foot. He still has not been located.

“No, esto es un sueño,” Esnelia thought as she slowly gathered herself: “No, this is a dream.”

“No me puede estar pasando a mi,” she said: “This can’t be happening to me.”

Destined to be together

Esnelia and Jose were born and raised in Vicente Guerrero, Durango, Mexico, a town with a population smaller than that of Long Beach City College. They met in high school, and in a community where most of the men showed off their parent’s wealth, Esnelia remembers a 14-year-old Jose working a number of jobs, including at a meat market and as a roof installer to help provide for his family.

His determination and hard work made him different from everyone else, and he instantly wooed her. They became boyfriend and girlfriend by the end of their teenage years, and every weekend, she watched as he carried that same work ethic onto the basketball court for the best team in the town.

Jose was so good at basketball, Esnelia said, the whole town often gathered to watch him carry his team to another win.

But eventually, Jose decided there was more out there than what Vicente Guerrero had to offer. He left for the United States in 1999, crossing the infamous Rio Grande river into Texas. Jose stayed in Texas that year, picking up jobs that would pay just enough to be able to send money back home to his mother.

But in 2000, he followed his sisters to California and got a job at a company making jars of pork rinds in brine.

Although physically separated, Esnelia and Jose’s relationship continued to blossom. They wrote each other letters and talked on the phone whenever they could.

In 2004, Esnelia joined Jose in the U.S. That year, they got married and found their new home: a studio apartment located on the 6600 block of Rose Avenue.

The Hamilton neighborhood in North Long Beach was where the Palacioses built their family. Their son, Salvador, was born a little over a year after moving into their new home.

“Cuando nacio Salvador, no el estaba bien conteno,” Esnelia said: “When Salvador was born, he was so happy.”

“Esnelia,” she recalls while mimicking his gasp.

“¡Esta bien bonito, se parece a mi!” Jose said when he first laid eyes on his son: “He is so cute, he looks like me!”

Their daughter, Samantha, was born a little over a decade later, and she never left Jose’s side. 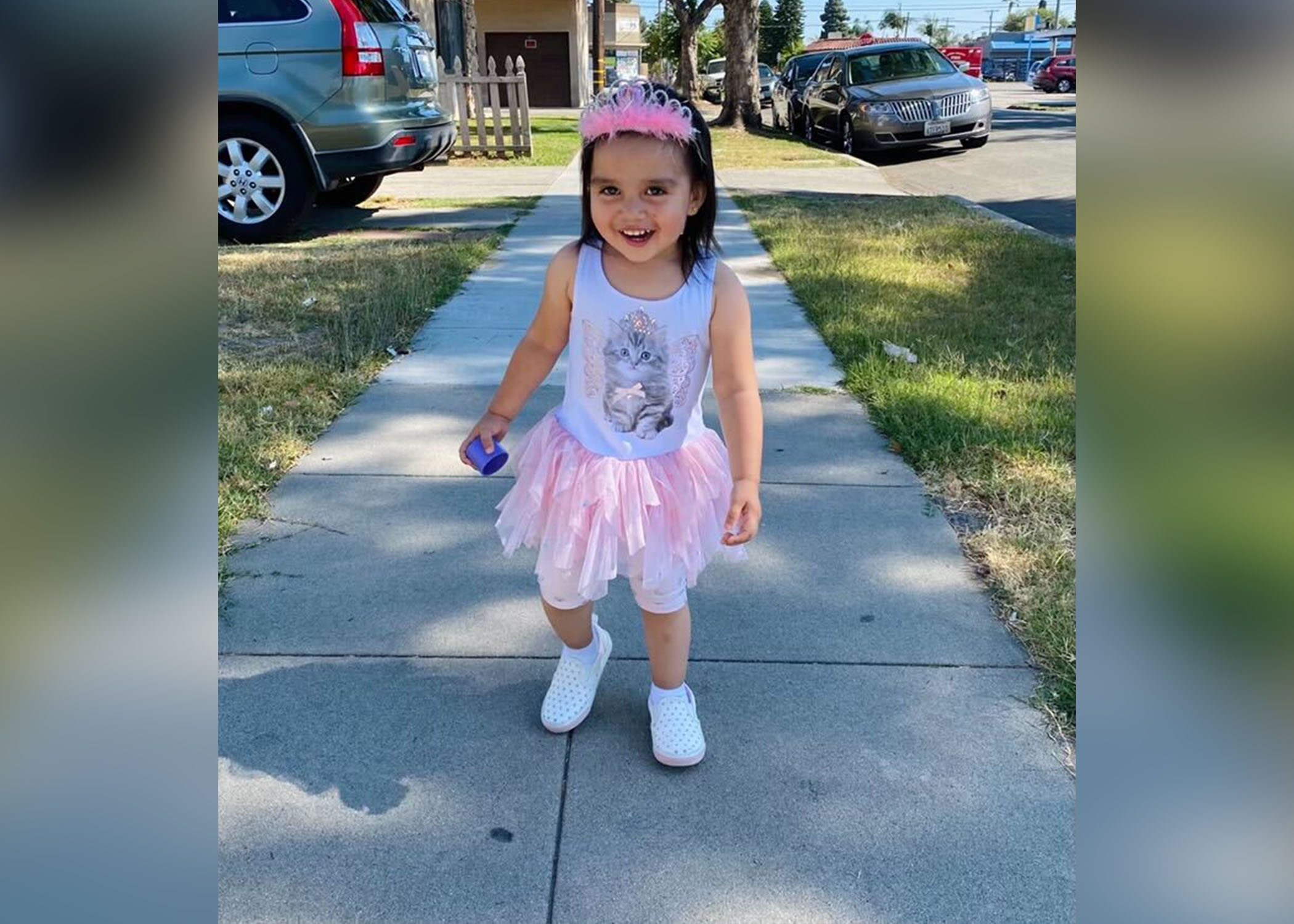 Jose and Esnelia loved to take Samantha out on walks around the neighborhood, the family says. Photo courtesy of Esnelia Palacios.

He dedicated his life to his family, spoiling them any chance he could with field trips or gifts whenever he could afford it.

But in the end, they were happy with just being a united family, always together and expressing how much they meant to each other.

“No necesitaba nada porque teniamos todo,” Esnelia said: “We didn’t need anything because we had everything.”

They can still hear her screams

On the day of the fatal crash, Jose had just gotten a haircut in preparation for his brother-in-law’s birthday later that weekend. He was looking forward to seeing the rest of the family after waking up at 4:15 a.m. all week to take the bus from Long Beach to work at the Bell Gardens pork rinds company.

“¿Y quien iba pensar?” Esnelia said: “Who would have thought?”

Instead, the family held a vigil that week for Jose and Samantha.

Esnelia said a lot of people showed up for the vigil, including patrons from Bottoms Up Tavern, the bar that police say the driver, Islas, was last seen leaving before crashing and fleeing.

Some of the bar patrons who witnessed the crash have offered their condolences to Esnelia, her family says.

They tell Esnelia that they can’t sleep. Every time they close their eyes, they see Samantha’s body being taken out from under the truck. But they also hear Esnelia’s screams of desperation as she called for her daughter.

Esnelia remembers those screams. After Islas fled the scene, she begged her husband to come out of the wreckage with their daughter.

But he never answered her pleas.

“Sentia que no gritaba tan fuerte, nadie me escuchaba,” Esnelia said: “I felt like I couldn’t scream very loud, that nobody could hear me.”

People from blocks away began to swarm to the site of the crash, following the sound of Esnelia’s screams, agonizing for her daughter. Esnelia recalls neighbors trying to help free Jose and Samantha’s bodies as several other people, including bar patrons, stared in shock.

Esnelia prayed for her family as a neighbor rescued Samantha from under the truck and handed her off to paramedics who took her to a hospital. Shortly after, Samantha died from her injuries.

Family members cried around Esnelia after hearing about Samantha’s death. But Esnelia couldn’t wrap her head around the facts. She convinced herself that there was something else the doctor was going to say after telling her that Samantha was in a better place.

“Yo eso tenia en mi mente, me va decir que le van hacer una cirugia, que va ser riesgosa pero va estar bien,” Esnelia said through tears: “That’s what I had in my mind, they’re going to tell me that they’re going to perform a surgery, that it would be risky but that she would be OK.”

After seeing her daughter at the hospital, Esnelia headed back to the apartment, where they had finally removed Jose’s body from under the truck, she said. By then, the coroner had taken his body away.

Today, a memorial honoring Jose and Samantha now stands in the place. Only plywood covers the damage to the apartment. 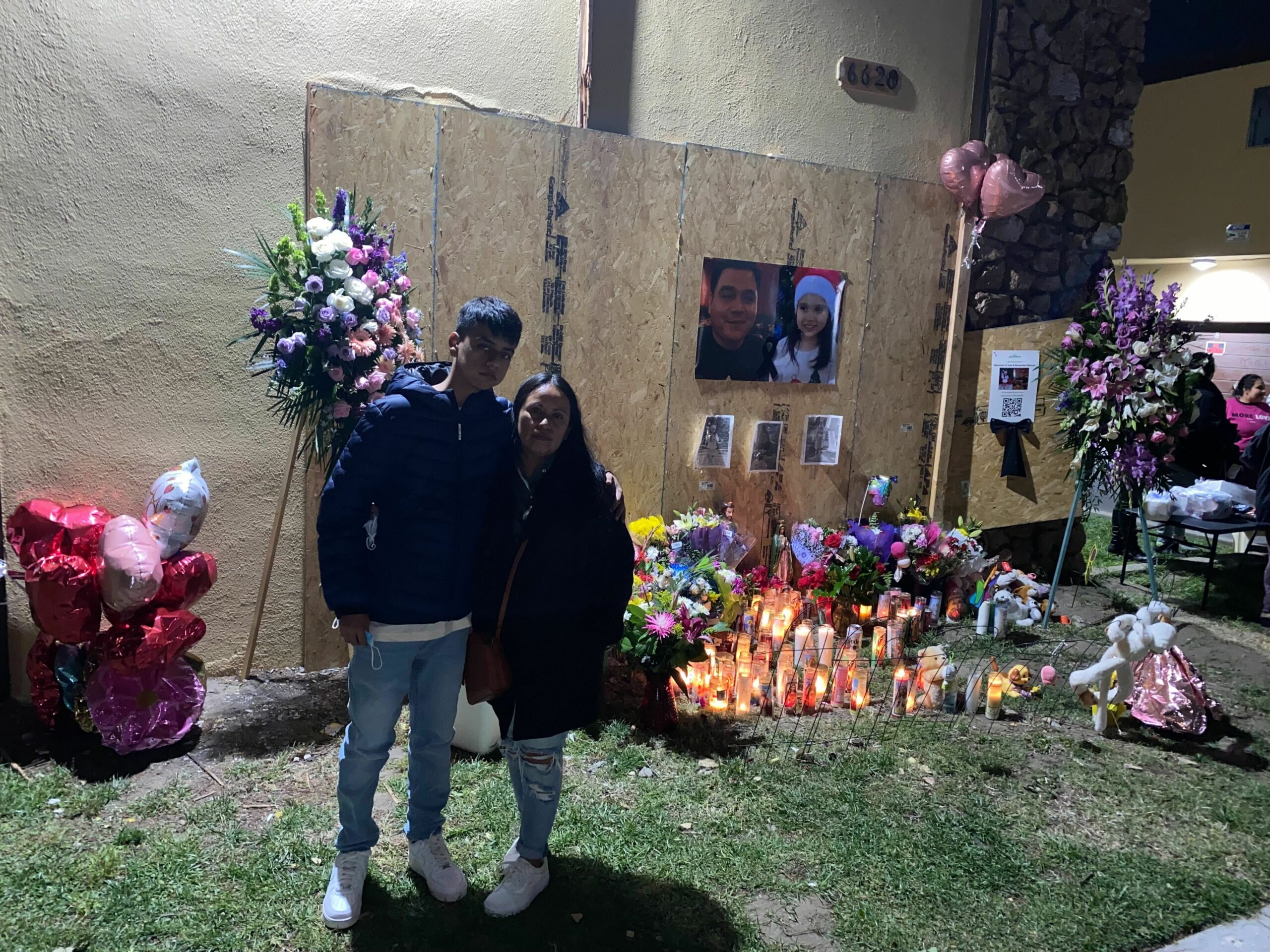 Salvador and Esnelia stand outside of their former home, where the site of the crash was turned into a memorial in honor of Jose and Samantha. Photo courtesy of Esnelia Palacios.

The catastrophe rocked the city. Assemblyman Mike Gipson, who said he lost a son in a hit-and-run, and LBPD Chief Wally Hebeish have both reached out to Esnelia to express their condolences and offer support.

“I cried,” said 52-year-old Maria Maldonado the day after she witnessed the aftermath of the wreck. “They were innocent people.”

Three weeks have passed since the crash, and police have yet to locate the driver of the pickup truck after a warrant was issued for his arrest. The Long Beach City Council has also asked for help from the Los Angeles County Board of Supervisors to create a $25,000 reward for information that leads to the arrest of Islas.

Meanwhile, the neighborhood has rallied around the Palacios family, including protesting against Bottoms Up Tavern.

In addition, the California Department of Alcoholic Beverage Control launched an independent investigation to determine whether Bottoms Up Tavern will face any consequences after it was confirmed that Islas stopped there for a drink before the crash.

“The only thing I care about right now is that family,” Suzanne Blevins, the owner of Bottoms Up Tavern, said earlier this month. Blevins said she is working with ABC and the LBPD. She has not commented on the incident since.

After being displaced, Esnelia has been staying with her husband’s family in Compton. Just last week, Esnelia said a final goodbye to the apartment she called home for 18 years.

It looked like a bomb had detonated inside, she said.

During her final visit to get the remainder of her belongings, Esnelia prayed and told her husband to take their daughter and guide her wherever they may be.

For a short time after the crash, Esnelia and Salvador couldn’t sleep. Esnelia said they thought they could feel the truck coming back.

Now, they cry from time to time, but they are trying to make peace with what happened. They know their family members were happy before their deaths, and there was nothing left unsaid.

They often laugh at memories of their loved ones and wonder what they would interject with if they were around for a random conversation.

“Pero ya llega la noche y yo todavia rezo ‘dios mio, que sea un sueño y mañana que despierte que todo este igual,'” Esnelia said, crying as Jose’s family and Salvador comforted her: “But when the night comes, I still pray, ‘Dear God, let this be a dream and when I awake tomorrow, let everything be as it was.'” 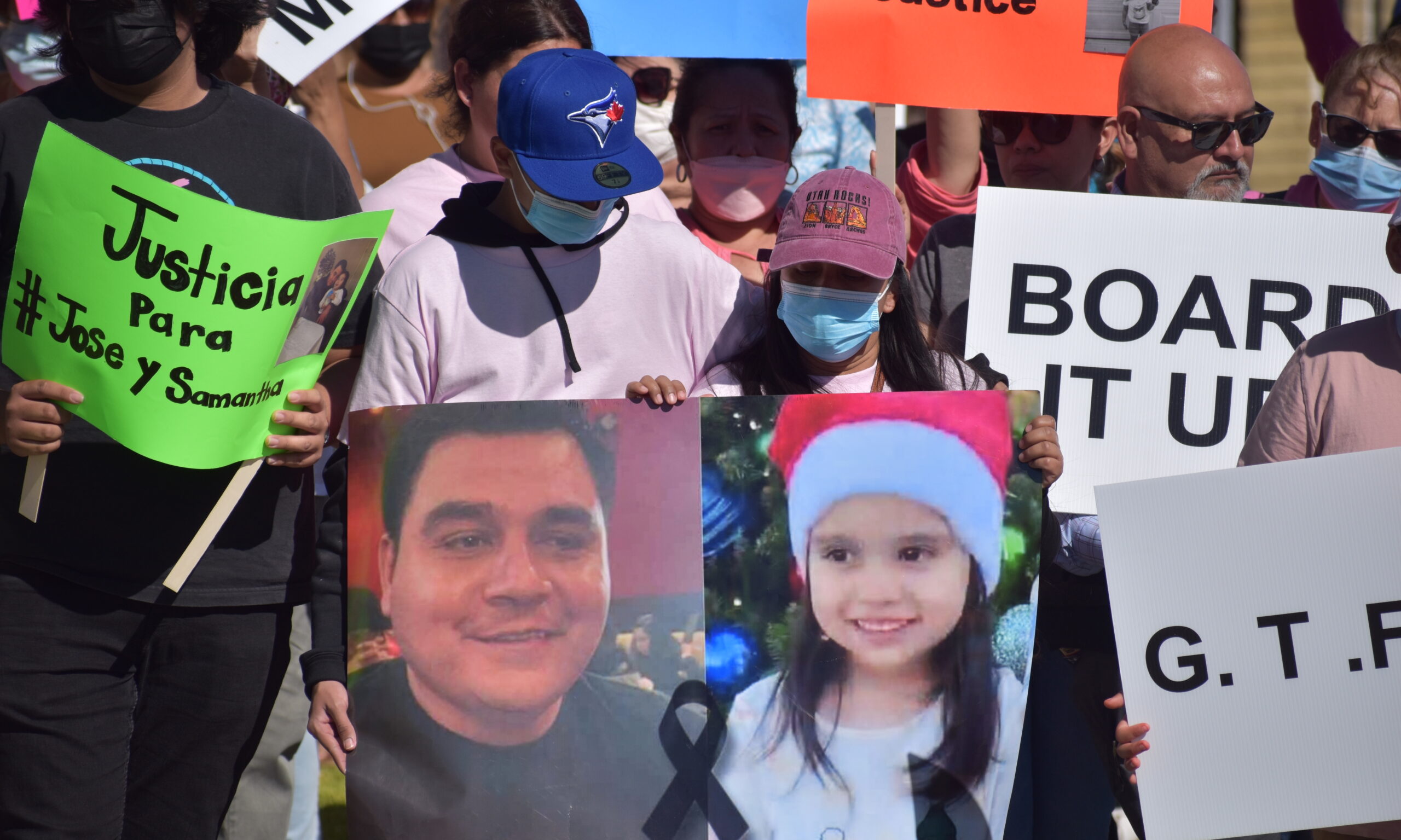 Salvador Palacios (left) and his mother Esnelia hold up a poster of their family members at a rally in the Hamilton neighborhood on Saturday, March 12, 2022. Samantha and Jose Palacios were killed after a pickup truck crashed into their apartment. Photo by Fernando Haro.

A GoFundMe page has been created to cover the costs of Jose and Samantha Palacios’ funeral services. The page has raised $52,995 of the $50,000 goal as of Wednesday.