During the wee hours of the morning, ​​residents living along the 710 Freeway in West Long Beach hear footsteps on crunching leaves that lay in a strip of land between the rear of their yards, between Gale Avenue and the freeway.

There, several unhoused people have created sophisticated encampments, complete with couches and tables, while also leaving piles of trash throughout the strip.

Ramon, 42, who declined to share his last name for fear of retaliation, said that someone cut the bamboo trees from his backyard to build a teepee about 20 feet tall. His young daughter told him that she sees people peeking through the trees while she plays in the backyard, he added.

In other instances, Ramon said he smells the burning of meth and crack cocaine. A neighbor, Ruby, who also declined to share her last name for fear of retaliation, said a man perched himself with his possessions on her yard and then her driveway to eat a meal. 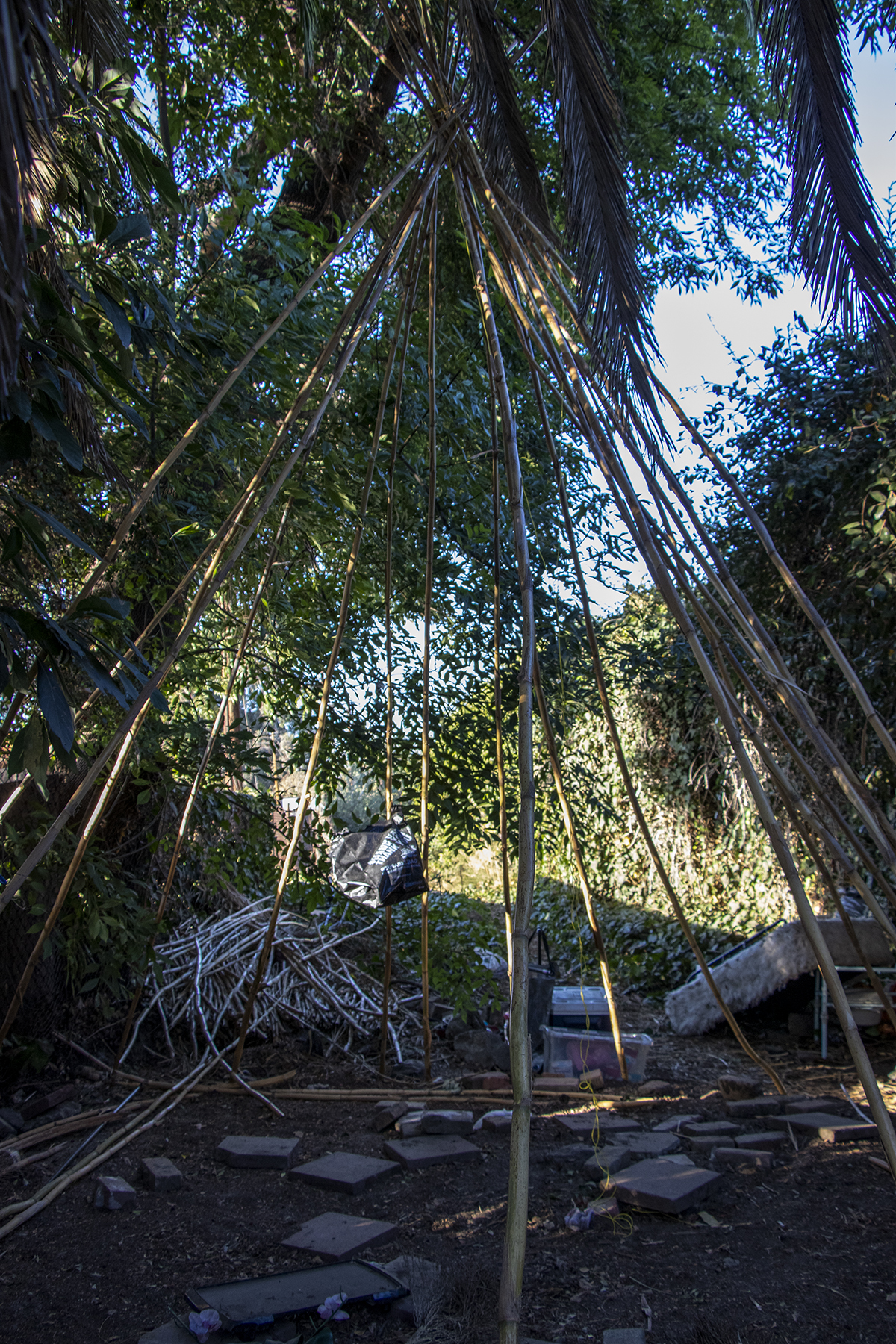 A skeleton structure of a teepee hut stands about 20 feet tall within a strip of Caltrans land along Gale Avenue in West Long Beach on Friday, Oct. 15, 2021. Photo by Crystal Niebla.

The most recent data released showed that homelessness grew by 7% from 2019 to 2020 in Long Beach, and residents say the encampments behind their Westside homes became apparent after the COVID-19 pandemic reached the city. Ramon, Ruby and other residents are growing concerned over their safety and say the encampments near them on Gale Avenue between 23rd and Burnett streets have been impairing their quality of life.

Residents have reported urine, feces, and untamed weeds that one resident said make the area “ripe for fire.”

“It’s trash, it’s feces, it’s everything,” Ruby said. It’s so bad, she said, that she’s considering selling her home and moving away. “It’s just getting to the point where it’s getting ridiculous,” she said.

David, 62, who also declined to share his last name for fear of retaliation, said that he and residents on the block have called the police and requested authorities to clean the strip of land.

Aurora, 42, Ramon’s wife, said her husband saw a man with a crowbar trying to break into a house across the street on Tuesday night. Recently, there’s been an increased police presence in the area, she added.

“It’s sad and scary all at the same time,” Ruby said.

Because the land is next to a freeway, Caltrans is responsible for any cleanups.

Aurora said she has seen Caltrans crews with California Highway Patrol officers collecting trash and putting it into a large container over the past year. The last time they came was Monday morning, she said.

Caltrans spokesman Jim Medina said via email that his agency coordinates with “local partners and social service providers on encampment cleanups, and to address immediate threats to public health and safety or critical infrastructure while helping to connect people experiencing homelessness with essential services.”

This year, Caltrans is also receiving $2.7 million in state funding for its “encampment coordinators to mitigate safety risks at encampments on state property, clean trash and debris, and to coordinate with state and local agencies to connect people living in these encampments to support services and housing.” This statewide funding is on top of $2 billion in aid to local governments and $50 million in encampment resolution grants to assist local governments with resolving encampments, Medina said.

Despite these efforts, David said West Long Beach continues to be underprioritized. He works in East Long Beach and always sees a visible difference.

“Why do particularly ethnic neighborhoods or (low) income neighborhoods seem to be less kept up when it’s a city problem?” he said.

Long Beach Health Department spokeswoman Jennifer Rice Epstein said via email that the city “is aware of the encampments in West Long Beach and is advocating Caltrans to prioritize cleanup in these areas.” 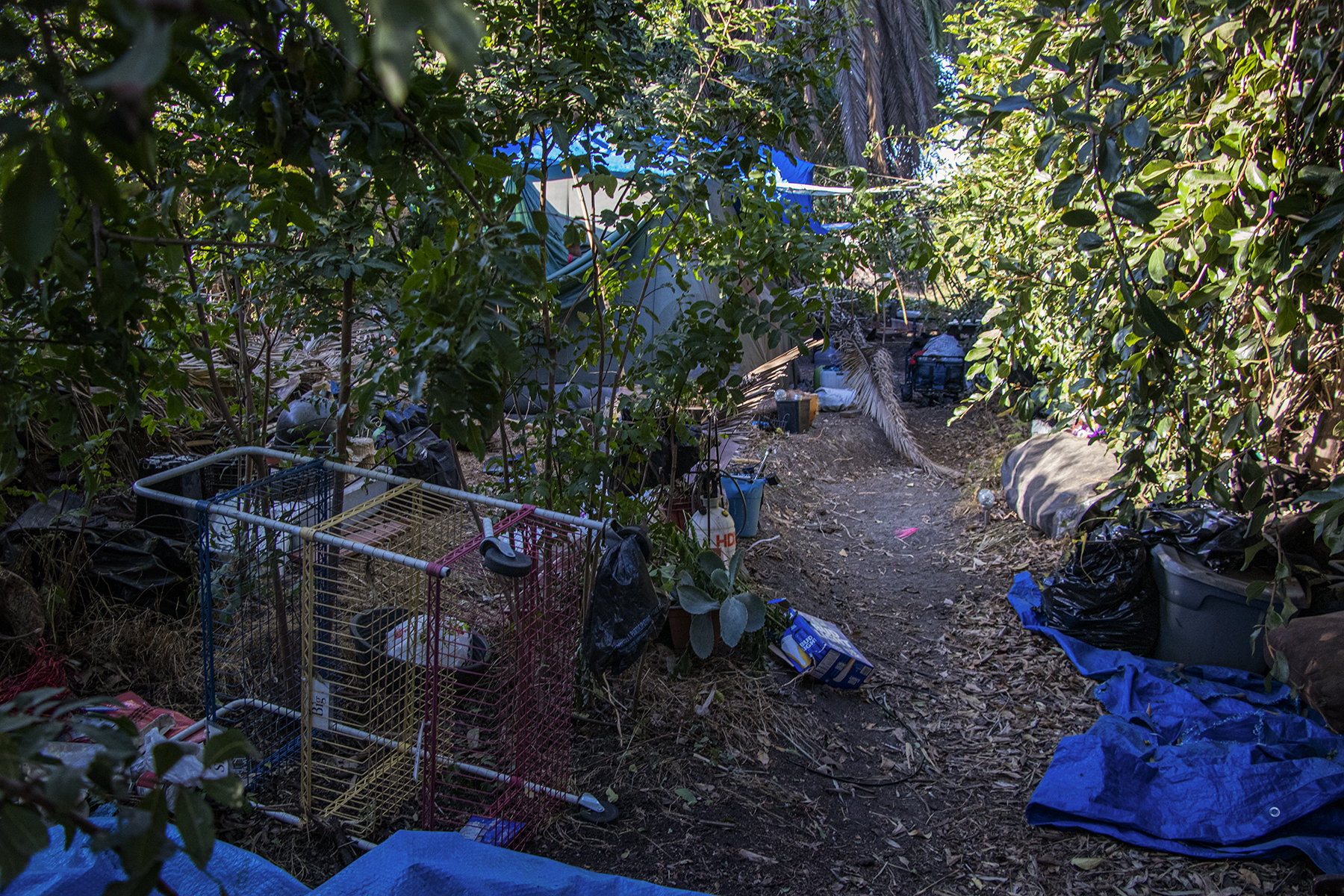 Trash is littered throughout around encampments at a strip of Caltrans land between the 710 Freeway and Gale Avenue in West Long Beach on Friday, Oct. 15, 2021. Photo by Crystal Niebla.

Alfonso Navarro, an officer in the Long Beach Police Department’s Quality of Life team that responds to people experiencing homelessness, said that while cleanups occur, it’s actually a problem when unhoused individuals repeatedly return to encampment areas. The areas are often where recurring drug use takes place, Navarro said.

“Sometimes, there’s so many cleanups in the city that we’re kinda backlogged,” Navarro said.

When sent out, the Quality of Life team works in conjunction with the city’s Multi-Service Center for homeless services to offer services to unhoused individuals including transport to shelters, the Multi-Service Center, and detox facilities. They will even buy bus tickets for people to return to their home state, if necessary.

A county clinician rides with the team four times a week to make mental health evaluations. If needed, the officers can take individuals to a nearby hospital, Navarro added.

The officers try to cultivate relationships and build rapport with the unhoused individuals so that they might become more willing to accept services in the future, LBPD spokesman Brandon Fahey said. 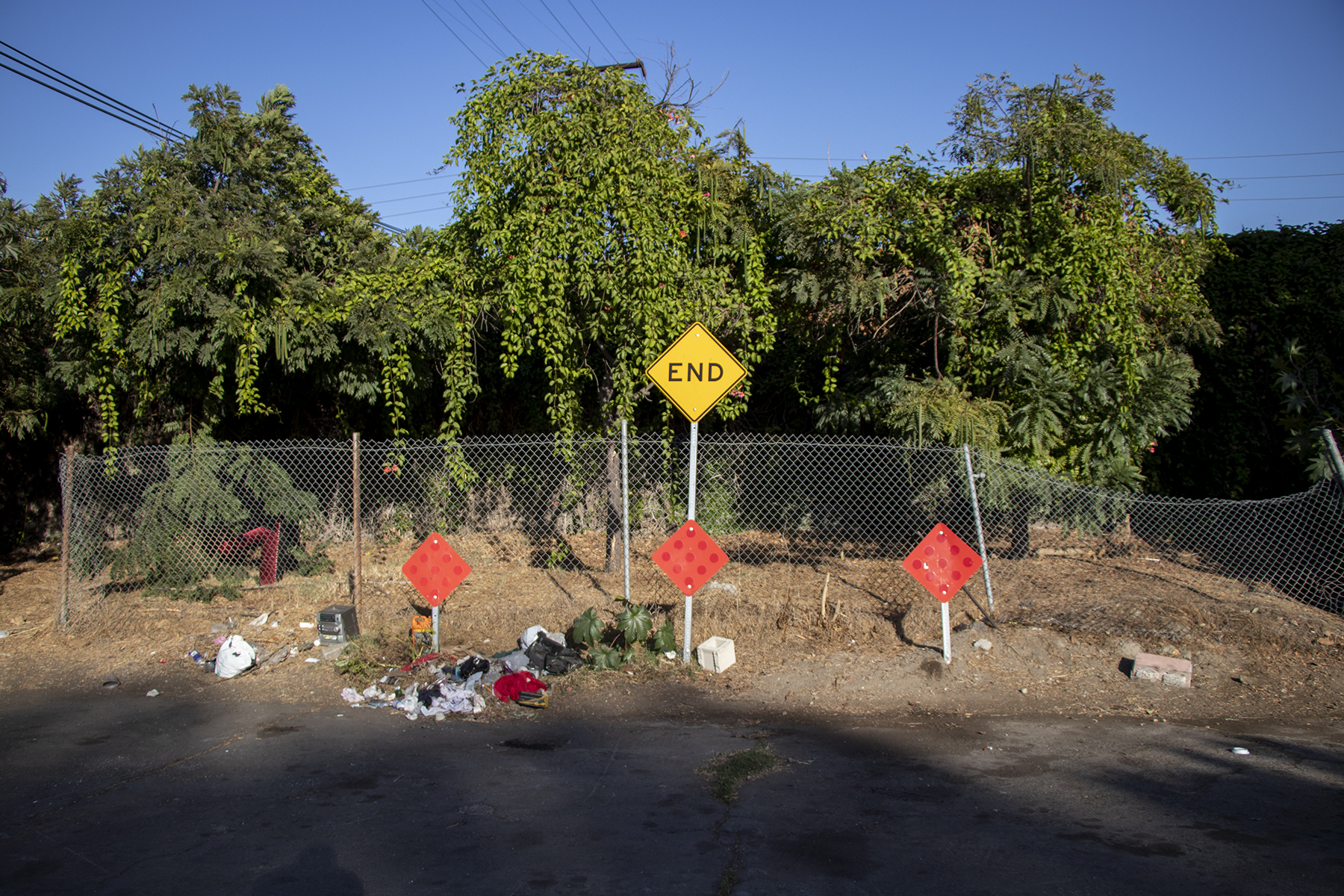 Trash is littered at a makeshift entrance to a strip of Caltrans land where encampments have been set up between the 710 Freeway and Gale Avenue in West Long Beach on Friday, Oct. 15, 2021. Photo by Crystal Niebla.

In mid-October, a group of residents visited the strip of land. A man carrying a rifle-like BB gun yelled at them, saying he had a right to live there, they said. Then he threw the BB gun with its box onto dry grass outside of a makeshift entrance into the strip.

William Kelsea, 47, who lives in an encampment on the strip, said that he doesn’t always get along with other unhoused people in the encampment area. Kelsea said he’s not incredibly fond of those who litter the strip with trash.

To Kelsea, the land is a “free area” for him. He estimates seven others live in the area as well, and said he didn’t want to be accused of littering or causing disturbances in the strip. 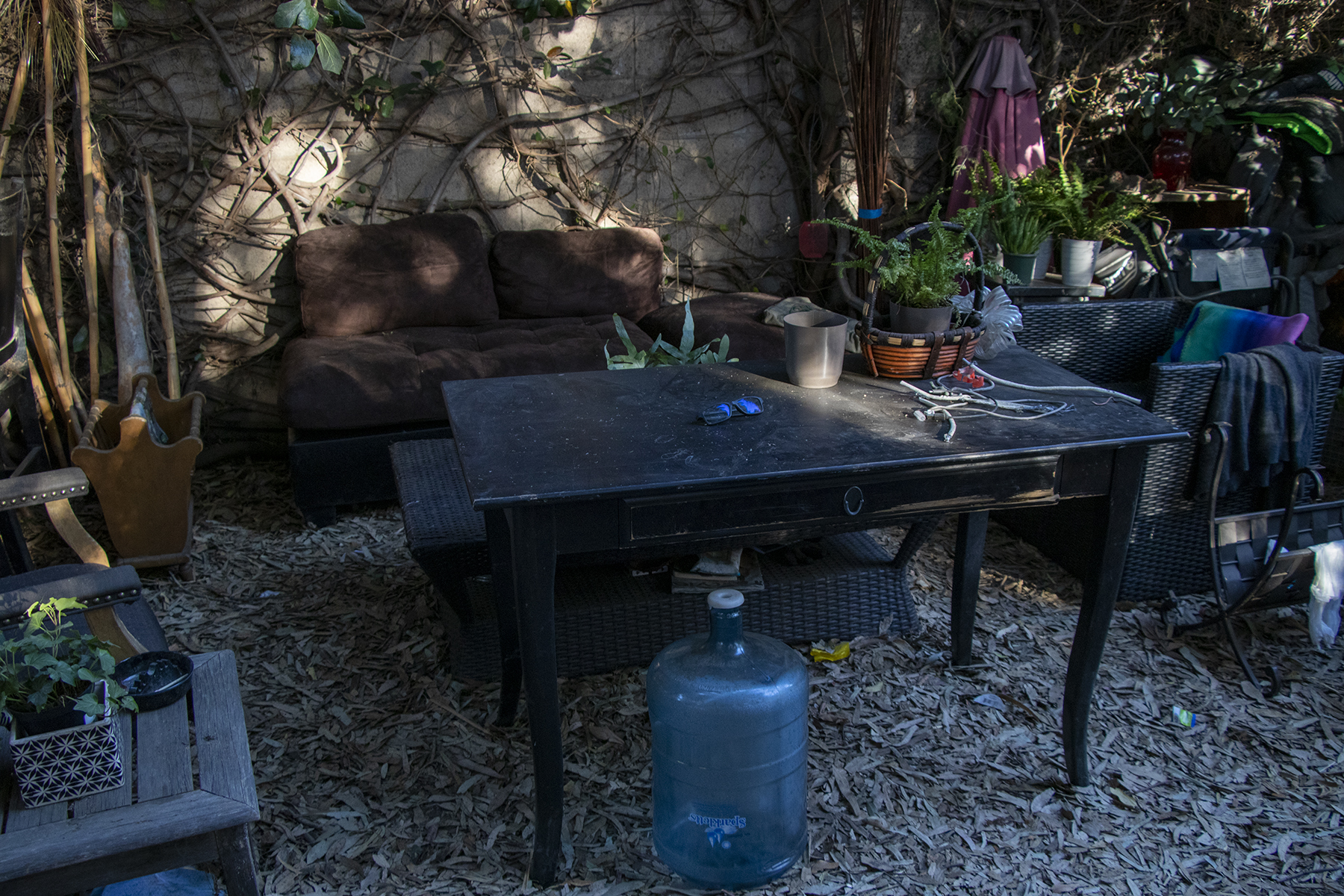 Tables, seats and other decor furnish a section of the strip of Caltrans land along Gale Avenue in West Long Beach on Friday, Oct. 15, 2021. Photo by Crystal Niebla.

Tattoo, who used his nickname for fear of retaliation, receives services from Care Closet at a different encampment along the 710 Freeway. He said that he does not like to be lumped together with those who cause trouble. He said he and others who live by the 710 actually help clean up trash.

“But they blame us. It’s not all our fault,” Tattoo said.

Ordinary people, he said, don’t care much for those like him. “They look at us like we’re the lowest of the Earth,” Tattoo said.

While Givens sympathizes with residents, Long Beach residents think calling authorities will solve the homelessness problem but residents offering help to unhoused individuals, he believes, might be more effective. Caltrans’ cleaning of encampments, for instance, isn’t really helping anyone.

For her part, Gale Avenue resident Ruby said she sympathizes with unhoused individuals who might be struggling with mental illnesses, drug addiction or other obstacles. She agrees that there needs to be more resources to address homelessness than what already exists. But her fear, and that of her neighbors, is real.

For now, many Gale Avenue residents say that they have to look out for each other because they can’t rely on anyone else to help them.