A young Long Beach police officer is under investigation for allegedly posting a picture of himself holding his baton over what looks like a blood-splattered sidewalk during Sunday’s protests sparked by the death of George Floyd.

“The images depicted here are very disturbing and are not in line with the high standards we hold our officers accountable for,” Police Chief Robert Luna said in a statement.

A department spokeswoman said the LBPD immediately launched an internal affairs investigation after being alerted to the photos on Thursday. Buzzfeed News first reported the investigation. 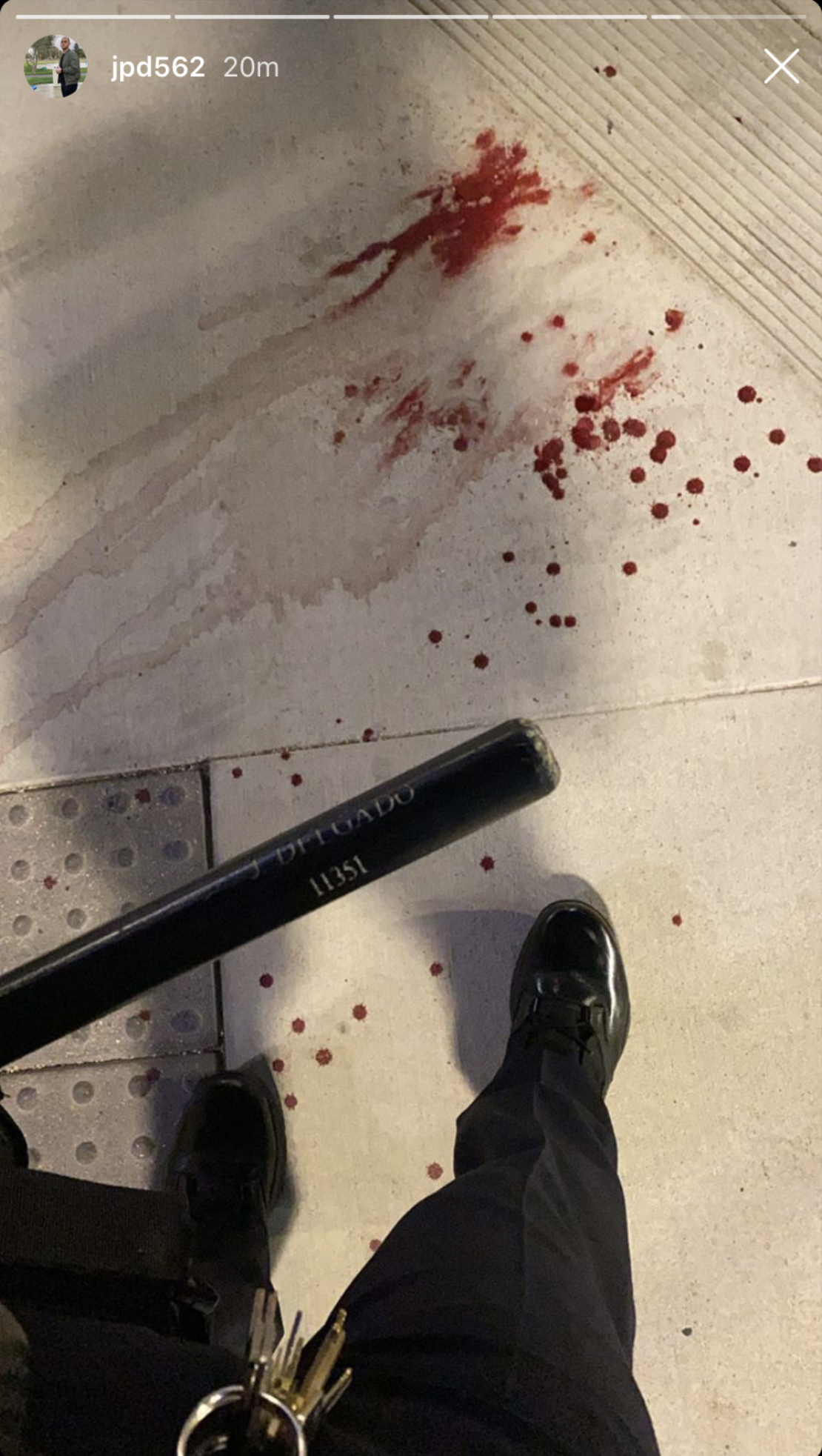 “Our social media policy requires our officers to use appropriate discretion when posting photographs or speech that may jeopardize investigations or discredit our Department,” a statement from the LBPD said.

The officer has been removed from all patrol duties, and, “Upon conclusion of this investigation disciplinary action will be taken, if necessary,” police said.

The person who provided the photos to the Long Beach Post said the officer, Jacob Delgado, posted the image on his Instagram account around 9 p.m. on May 31, which is around the time officers were clashing with protesters in Downtown as looting began to spread across the city after a 3,000-person march.

The photo Delgado allegedly posted includes his name on the baton. Another Instagram account also shared the photo in Delgado’s story the words caption “bro getting his” on top of the baton. 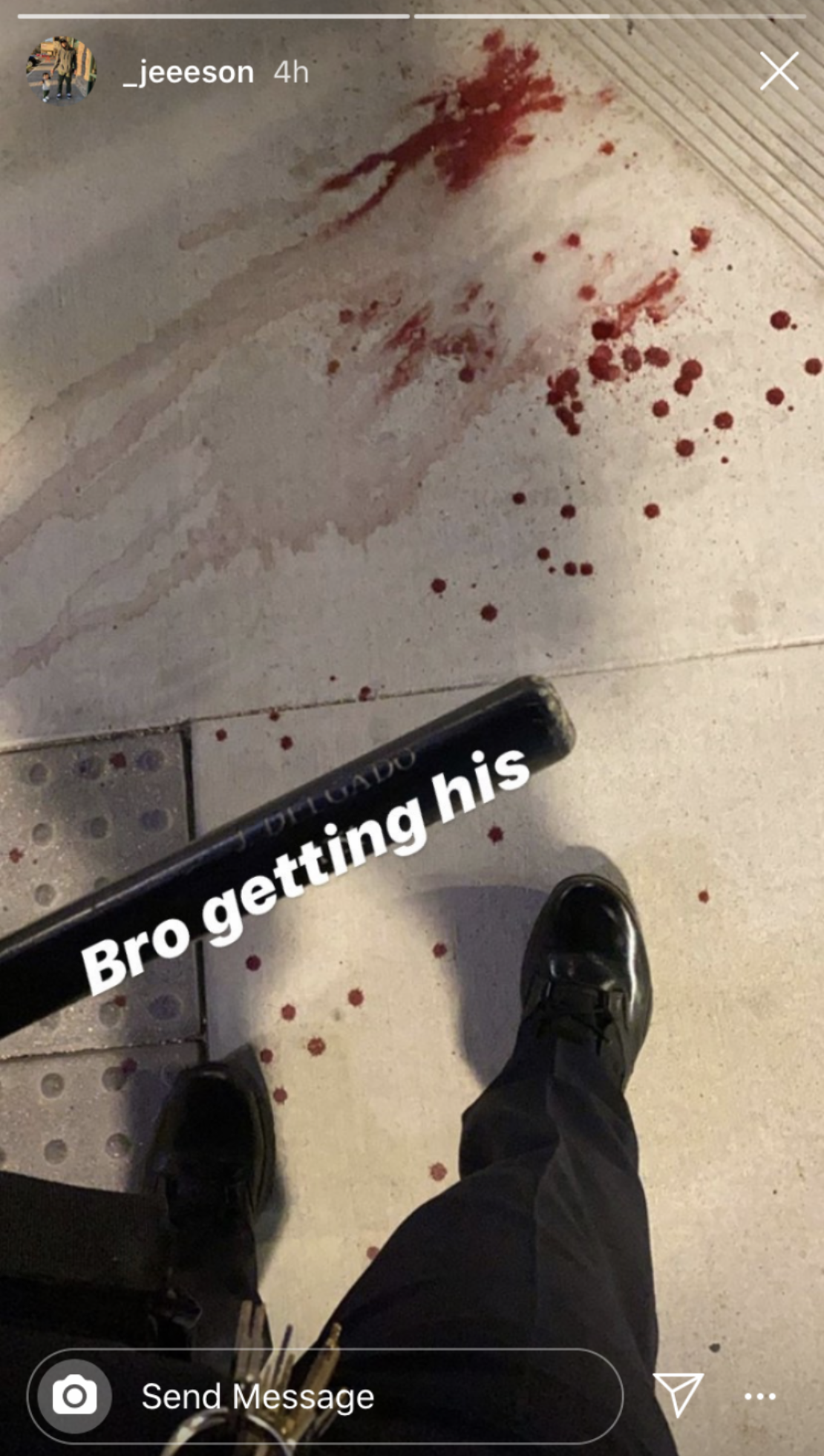 The person who provided the photos to the Long Beach Post also provided a picture of Delgado in the back of a police car with two other officers reportedly on their way to the protests. Long Beach police have been riding 4 to 5 officers per car while they’re on maximum deployment to respond to protests that have continued across the city for the last few days. 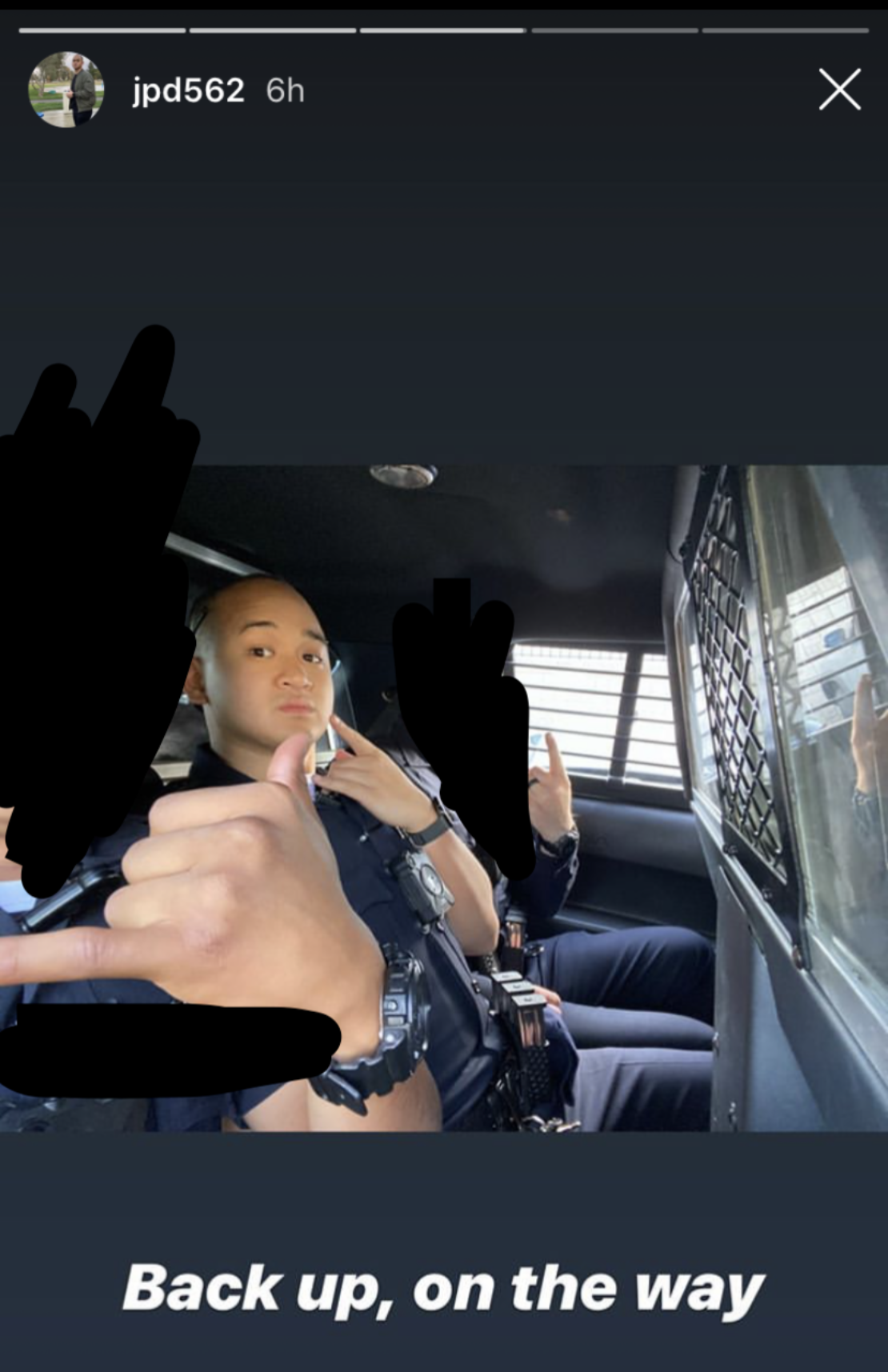 A LinkedIn page that says it belongs to Delgado says he was an intelligence analyst for the U.S. Marine Corp Reserves before being hired by the LBPD a little more than a year and a half ago.

A press release from the LBPD says Delgado graduated from the police academy in May 2019.

Delgado’s Instagram and Twitter account were deleted on Thursday, but in a previous post, he seemed to reference chaos that followed the protests on May 31, saying “People out here stabbing each other. Shooting each other. Burning down small businesses. Long Beach is in shambles.” 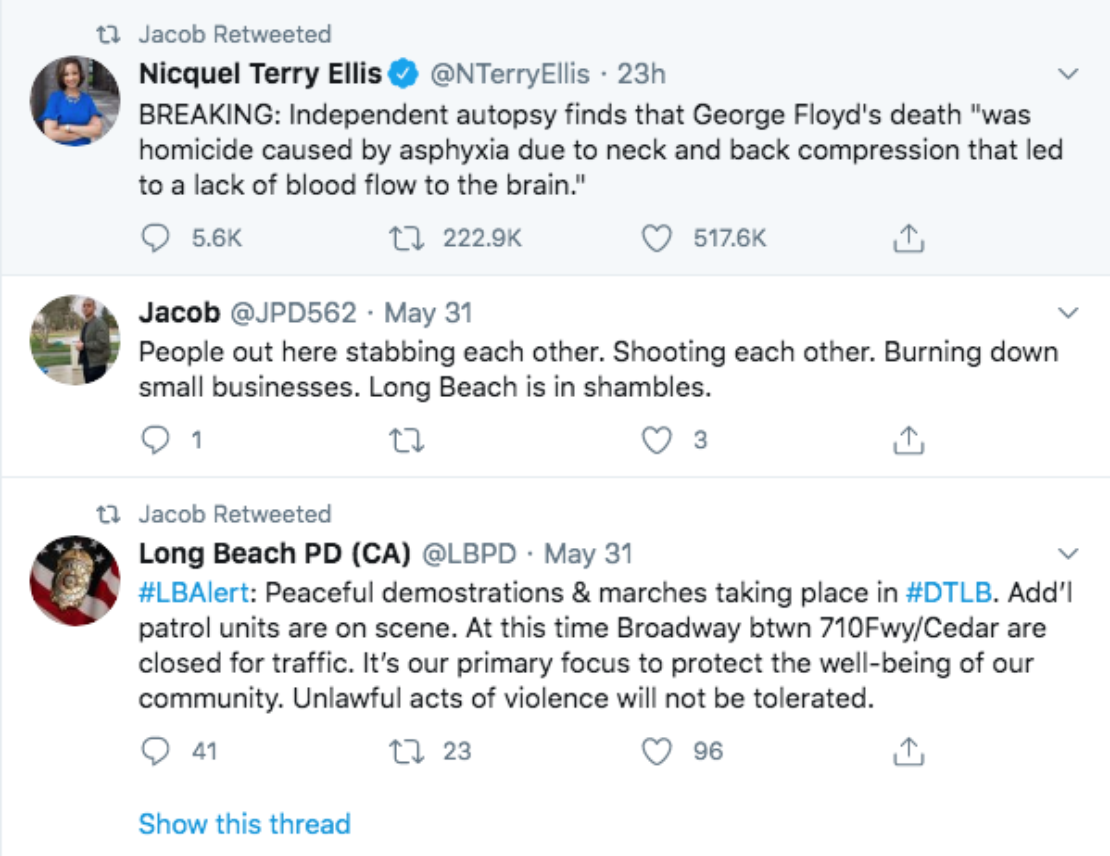 Not long after, he also retweeted a tweet about an independent autopsy finding that George Floyd died from asphyxia under the weight of Minneapolis police officer Derek Chauvin’s knee.

“That police officer murdered George Floyd,” Delgado said in another tweet on May 30. 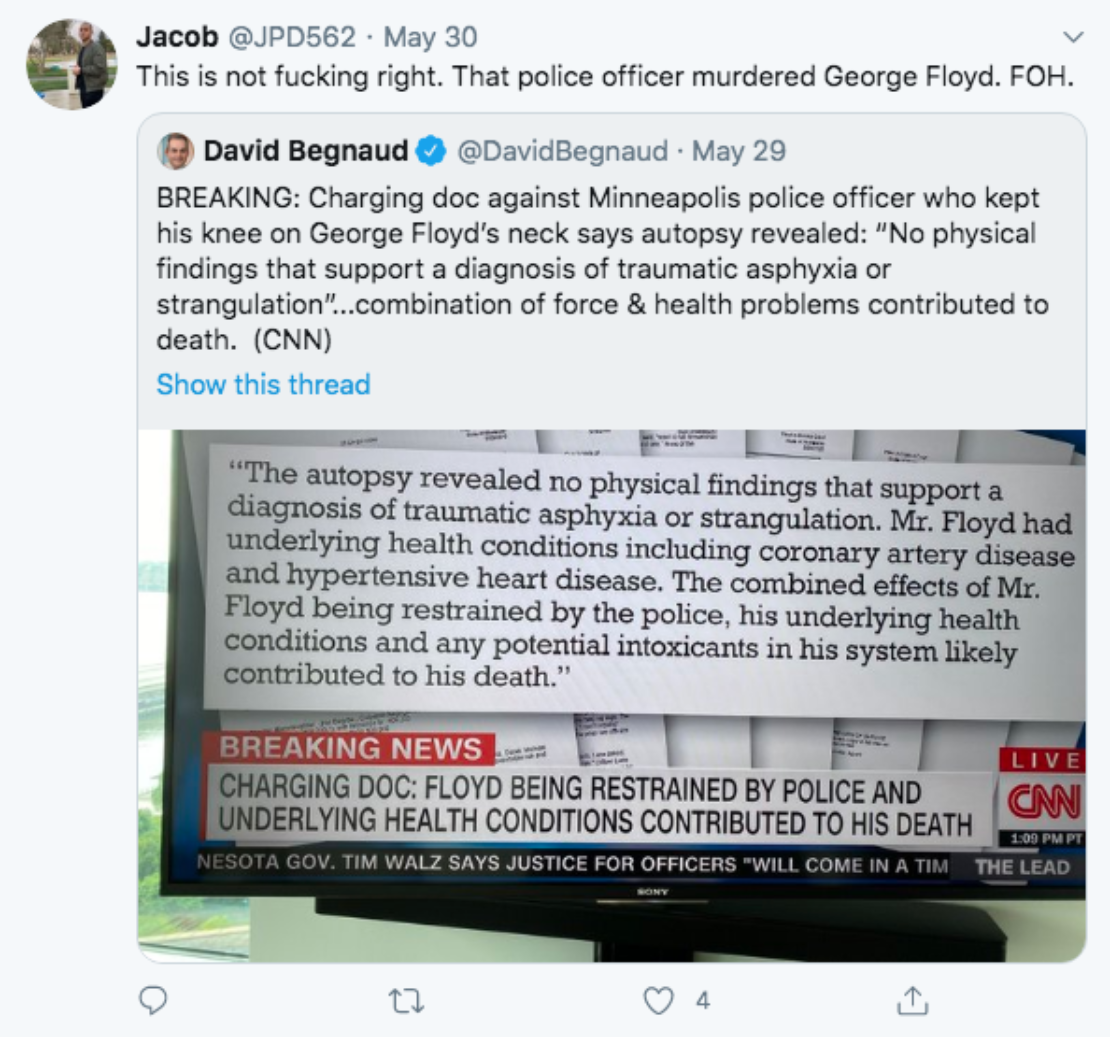 Earlier, Delgado sent another tweet apparently angry about the death of Ahmaud Arbery, the black South Georgia man who was chased by two armed white men who have since been charged with his murder. 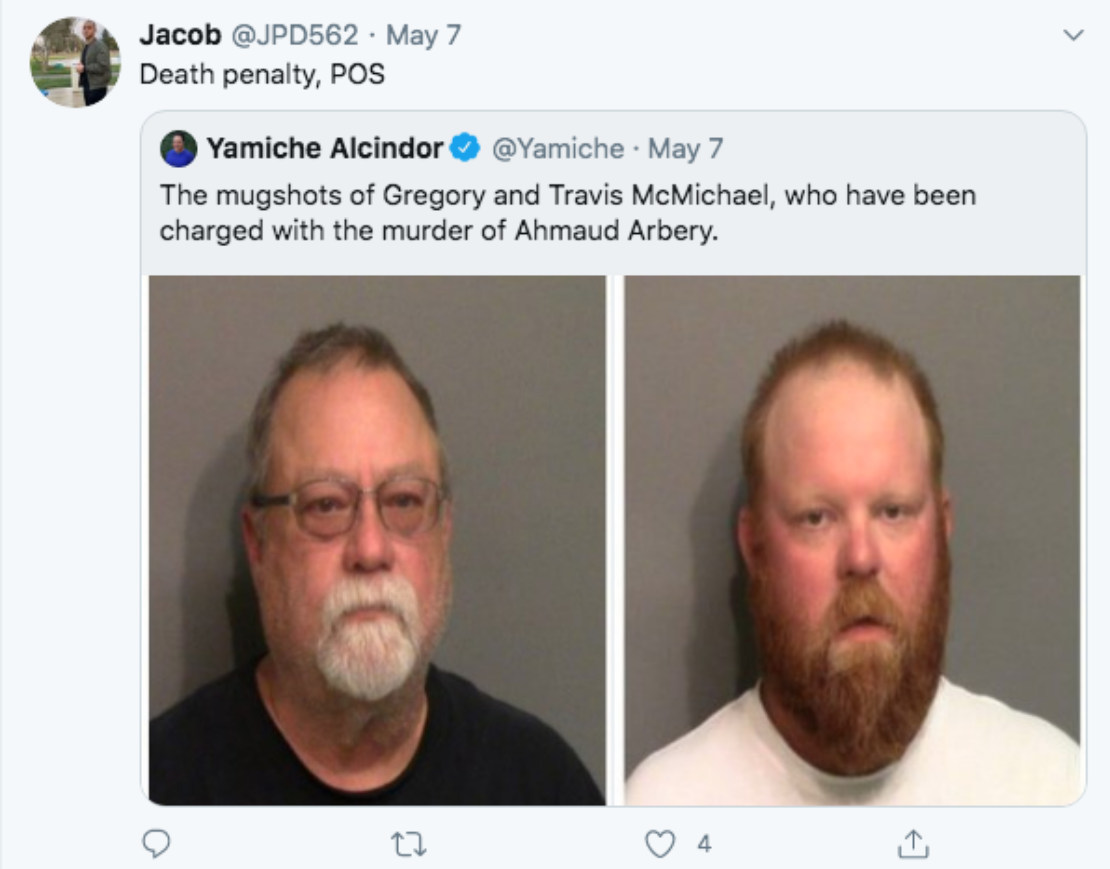 Long Beach politicians swiftly weighed in on the situation after Buzzfeed posted a news story about Delgado.

“Zero tolerance for this. Don’t be silent. The culture has to change,” Councilman Rex Richardson said on Facebook.

“And just like that, they show us who they are. I am pissed. I am heartbroken and I will not settle for this. Clearly, our city has failed you,” she said. “More information will be out today on this investigation. Clearly, no one can say we shouldn’t act to make systematic changes right here in Long Beach. As always, I believe we have good officers, right now we can’t see past the bloodstains, excessive use of force, the multiple guns, and the rubber bullets. WE NEED ACTION IMMEDIATELY. I will keep you posted on next steps.”