But Rowe, in collaboration with the city and a local nonprofit, is trying to beautify and upgrade small businesses in West Long Beach, from installing outdoor plants to power-washing streets to painting more murals in the area. He and his two other team members, Michael Cano and Urina Harrell, from the consulting group Project Business Lift, are trying to make the area more inviting.

The group is hoping to improve the business strip of Santa Fe Avenue between Willow Street and Pacific Coast Highway, which Project Business Lift is calling the “Santa Fe Village.” 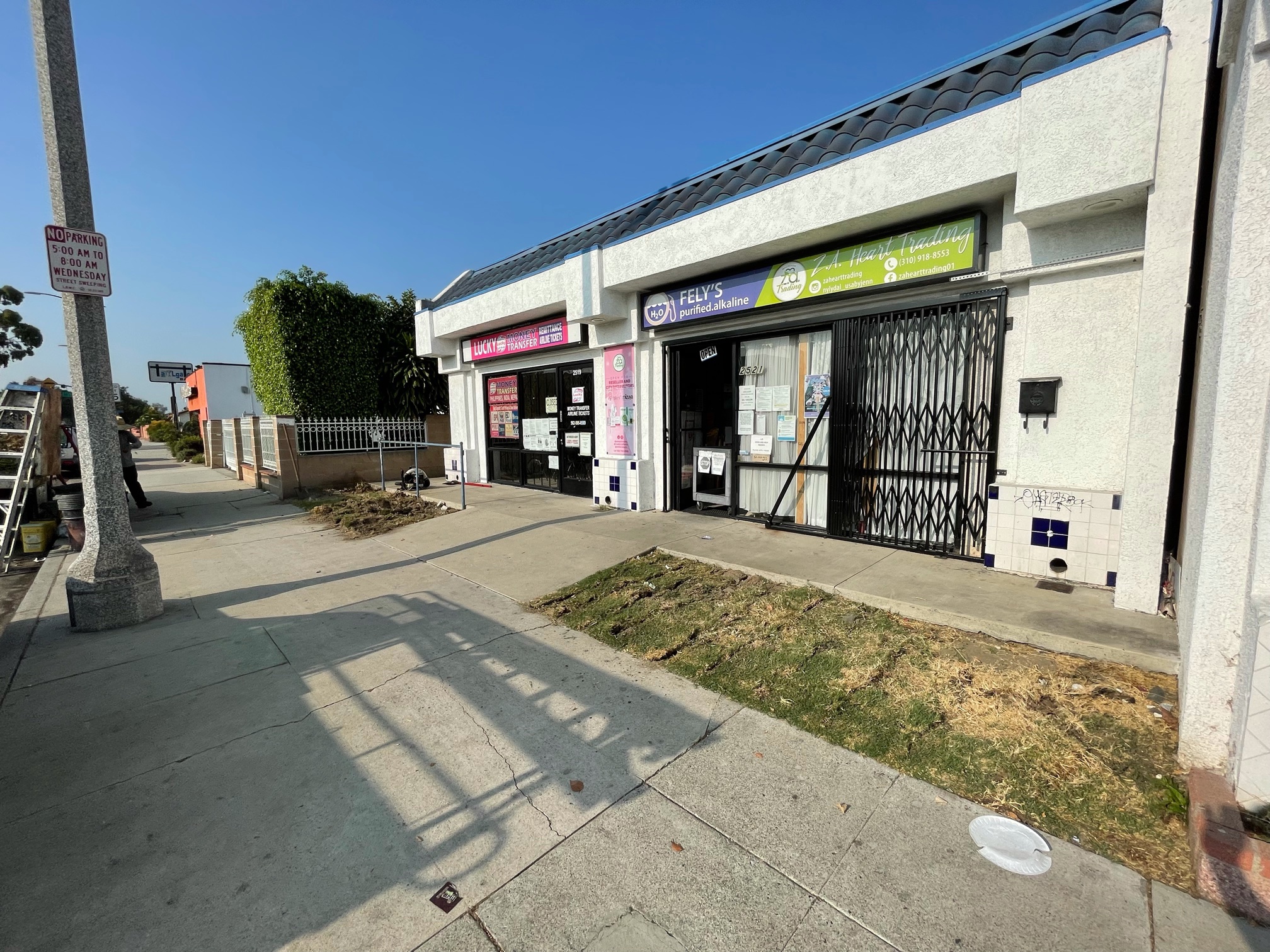 A crew excavates on a grassy area to convert it install new plant outside a group of businesses on Santa Fe Avenue in West Long Beach. Photo courtesy of Jeff Rowe.

While North Long Beach saw an economic boom during the pandemic shutdowns last year, almost the rest of the city saw significant dips. Specifically, the 90810 area code, which encompasses most of West Long Beach, had a 12% decrease in small business revenue.

Rowe said business coaching and resource outreach in North Long Beach made a difference there, having seen a 39% increase in small business revenue last year. The group wants to replicate economic recovery in West Long Beach.

The Long Beach Economic Partnership received $250,000 last year from Prologis Inc., a ​​real estate investment trust based in San Francisco, which has already been responsible for projects on the corridor like the large mural on a tax services business on Santa Fe Avenue and 20th Street, sponsoring the food festival Everybody Eats and improvements to A&F Market on Santa Fe near Willow Street, said LBEP management consultant Elizabeth Tulasi.

Tulasi said some money was earmarked for steam cleaning and tree watering. They also intend to donate $25,000 to help fund the replacement of the burned playground at Admiral Kidd Park, she said.

“It’s an ongoing project,” Tulasi said about the corridor improvements.

Other programs included a pilot program called “Go Digital,” which trained 48 businesses on social media marketing and using more technology for business, she said. About 10 of them were from the Santa Fe corridor. 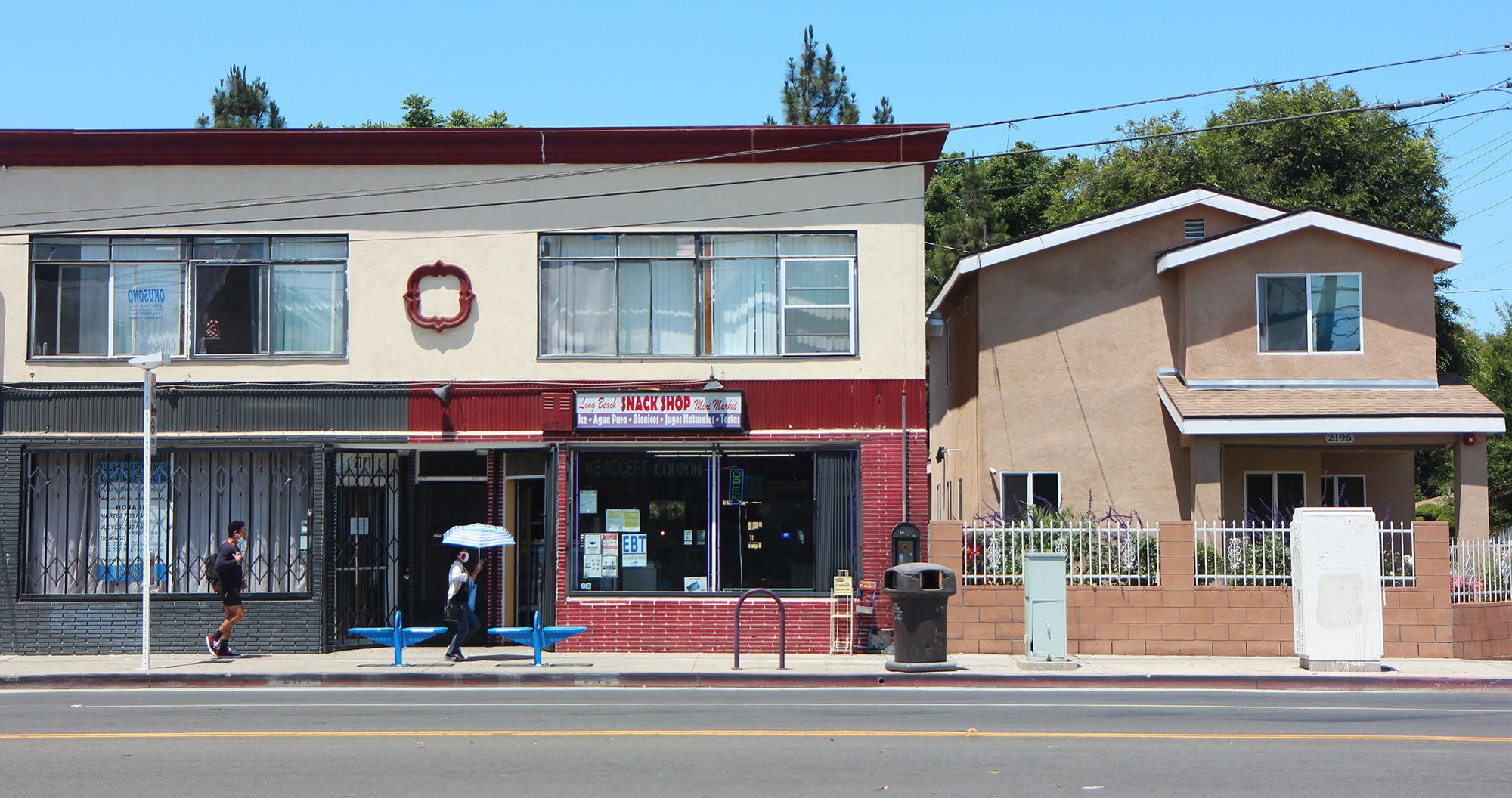 A lone single-family home sits next to a multi-use building on the corner of Santa Fe Avenue and Hill Street with multifamily buildings sitting on each of the other three corners of the intersection, Tuesday, June 22, 2021. Photo by Brandon Richardson.

Project Business Lift’s Michael Cano said businesses were given about $250 in seed money to help them with their online presence, such as using the money for online ads. Many of these small business websites have little or no social media presence, Cano said. To help centralize the corridor, Cano added, the group also made a website for the business of Santa Fe Village.

But while these groups try to connect small businesses with city grants to improve storefronts, the grant resources have been underused by the area, Rowe said.

Cano and Rowe say many of these small businesses are too busy to get started on applying for help.

Tony Do, chef and owner of Vegan Castle, a new vegan sushi restaurant on the corner of Santa Fe Avenue and Burnett Street, is one of them. Do’s storefront is missing a sign and needs repainting, and he said he hasn’t had the time to submit a city grant to fund the upgrades.

“I’m so busy right now,” Do said as he prepared an order behind a counter. He opened in July.

Rowe said he and his team are trying to help fill these gaps and establish a thriving business corridor like Second Street or Pine Avenue, places with lots of foot traffic and interesting shops while maintaining a Westside character.

“Not just a thriving, but a jazzing place,” he said.