Larger than normal undercounts of immigrants, renters and others skewed this year’s Census count, a new analysis by UCLA shows, with researchers blaming the pandemic and the Trump Administration’s threat of a “citizenship” question.

The report showed that the biggest undercounts in Los Angeles County likely occurred in neighborhoods that are predominantly renters, those living below the poverty line, or immigrants, regardless of status.

Professor Paul Ong, a research professor at ULCA’s Luskin School of Public Affairs, and Jonathan Ong, of Ong and Associates, a public-interest consulting firm, published their findings Aug. 18 after combing through 2020 Census data that was released earlier this month.

Ong said the pandemic played a roll in limiting outreach efforts that could typically be done door-to-door. This created a “differential undercount” meaning that some populations were more likely to not be counted, he said.

The Census Bureau regularly conducts post-enumeration surveys to measure the accuracy of its data that it publishes every decade, which is used to set political lines for local, state and federal races.

The next post-enumeration survey is not expected to be released until early 2022, after the redistricting processes that are playing out across the state, including in Long Beach.

Ong said drawing lines with what appear to be abnormal deviations in population counts could have dire consequences for certain communities, not limited to the amount of federal funding areas receive, something that is directly based on population.

“Essentially what it means is that those who were left out of the Census will be robbed of their political voice,” Ong said. 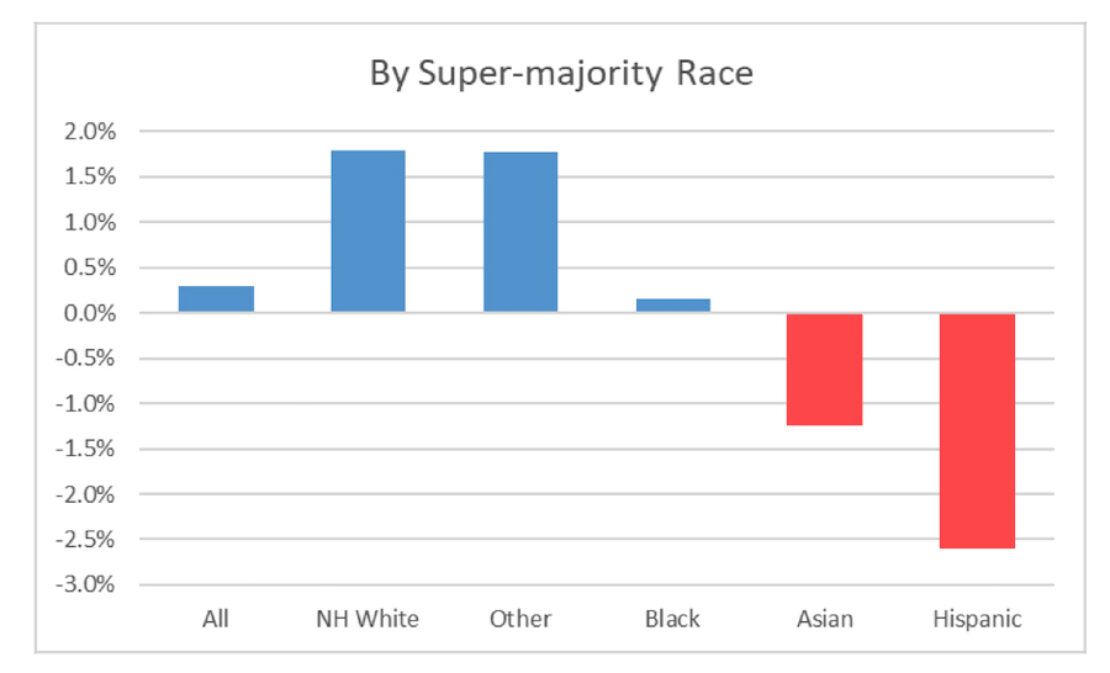 A screenshot from the UCLA analysis showing the differences between 2015-2019 American Community Survey data and the 2020 Census for communities with a majority race.

The city declined to make its consultant, who is advising the commission through the redistricting process, available for an interview.

Long Beach’s renter population is over 60% and is over two-thirds people of color, including over 25% of the population identifying as foreign born, according to the American Community Survey. More granular 2020 Census data has yet to be released.

While undercounts, and sometimes overcounts, are common, this Census cycle was rocked by a historic pandemic that coincided with efforts by the Trump administration to truncate the Census process.

The administration also attempted to add a controversial citizenship question to the survey, which may have caused immigrants of all statuses to reconsider responding to the Census, Ong said.

Ong’s group used a new method—comparing new Census data to periodic American Community Survey results—to estimate the deviations in population from the survey that concluded in 2019, and the Census that was conducted in 2020.

Ong said undercounts are normal, but this year’s appear to me more pronounced in certain neighborhoods, specifically those with large Asian and Hispanic populations.

“No one expects it to be perfect, the question is how inaccurate and what’s the pattern?” Ong said.

The analysis showed the difference between potential White household overcounts and Hispanic household undercounts was 4.4 percentage points when compared to the 2015-2019 American Community Survey data.

Similar potential undercounts were found when comparing more affluent households to those living in poverty, homeowners to renters and American-born residents to immigrants from other countries.

James Suazo, executive director of Long Beach Forward, which led a coalition of community groups in canvassing Long Beach to increase Census response rates, said that this year was “uphill battle” and that was before the pandemic hit.

“That prevented the one really solid outreach method that we all know works,” Suazo said of COVID-19 limiting critical door-to-door campaigning.

The groups, which included Latino, Filipino and Asian community advocacy groups, turned to alternative methods to get the word out using car caravans , leaving fliers on residents’ doors and even using mariachi performances to engage with hard to reach communities.

Suazo said about 3,100 fliers were left at homes in north, west and Central Long Beach homes, where some of the highest populations of immigrants live, and some of the largest poverty rates in the city are seen. However, fliers did not allow them to have the conversations with residents who were fearful of filling out the Census, didn’t know what the Census was or were simply unsure of which ethnicity to select on the Census, all things they ran into prior to the pandemic.

While the campaign was a struggle, Suazo said it gave insights to how the same groups would be able to effectively advocate for vaccination intake, something they’ve been doing for the past several months.

“People want to be heard, they want to be educated and have someone listen to them,” Suazo said. “Using trusted messengers is important because the government can only go so far.”