Tirso Chavez was walking down the block from Chestnut Market, a small convenience store in the Willmore neighborhood, when he heard gunshots ring out. It was the middle of the day in a residential area, but the sound didn’t rattle Chavez much.

“Nobody wants to see it happen, but it does,” said the 61-year-old, who works and lives as an on-site manager in a nearby apartment building. “It’s getting to be like a normal thing.”

Once again, Long Beach is on track for another exceptionally violent year. In 2020, the city suffered through the most shootings in at least five years, but with two months to go, 2021 surpassed that mark. As of the end of October, there’d been 384 incidents involving gunfire reported to police. That’s compared to 381 in all of 2020.

According to data obtained by the Long Beach Post through monthly public records requests, there were 31 shootings in October—16 where at least one person was wounded and 15 where nobody was hit. This marks a significant improvement from this year’s high of 57 shooting incidents in January, but it’s still a much larger number than the 2019 average of 19 shootings per month.

No one was injured in the Nov. 11 shooting outside the Chestnut Market, but to locals gathered on the street corners and around the fluttering police tape that day, it was a reminder about the threat gun violence poses to them and their neighbors.

Bullets have flown in just about every area of the city this year, but neighborhoods in Downtown, Central, West and North Long Beach have borne the brunt of the surge in gun violence.

The reasons for the spike are likely manifold and their individual weight is difficult even for experts to gauge.

The mental health impacts of isolating at home, unemployment as a result of pandemic-related job losses and a general lack of resources all likely play a role, according to Eric Lam, director of programs at the Los Angeles-based Urban Peace Institute. The institute is an organization focused on finding solutions that address violence in communities across LA County, with a special focus on gang violence.

“Sometimes community violence becomes a way to get ahead or to protect one’s own,” Lam said, adding that the elevated level of gun violence is likely due to “multiple root causes working in concert.” 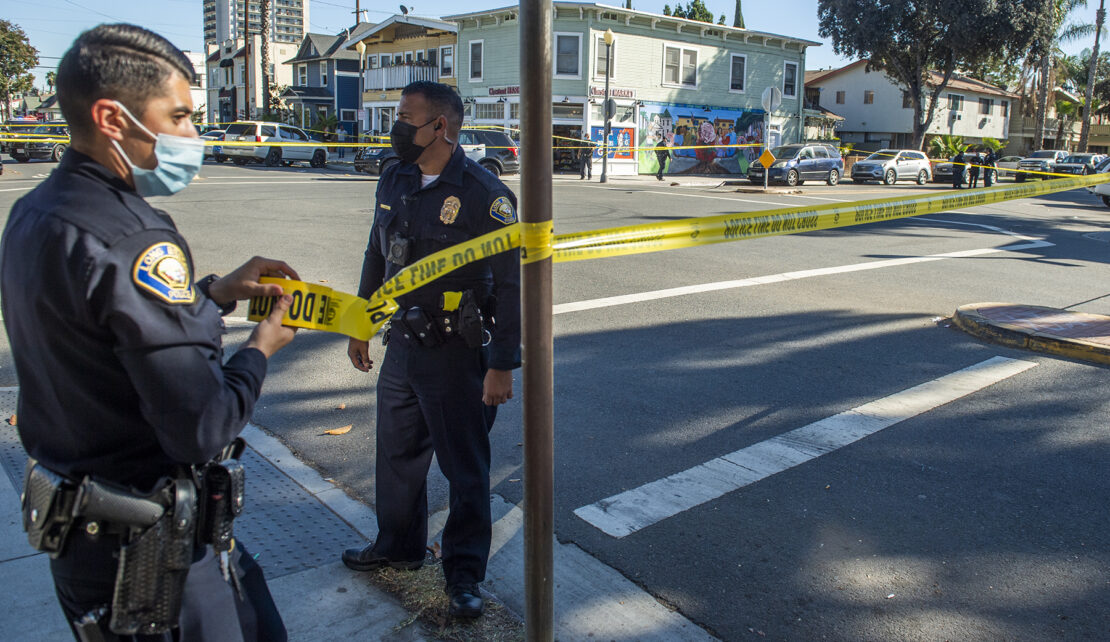 A Long Beach police officer tapes off the crime scene in front of the Chestnut Market on Thursday, Nov. 11, 2021. Photo by Thomas R. Cordova.

According to police, sentencing and bail reforms have also played a role by releasing repeat offenders into communities more quickly, and so has the proliferation of ghost guns—guns assembled at home that don’t bear a serial number.

But Mauk is quick to point out the progress the department has made following last winter’s surge in gun violence, when the number of shootings peaked.

He especially credited the creation of a Coordinated Response Team, which consists of staffers from various divisions within the LBPD, including the gang detail and public information unit. That team and others work to boost the number of guns police were taking off the streets.

“There’s a decrease to the increase,” Mauk said, describing the fluctuating number of shootings. “We’re building trust in the community and it’s having an impact.”

Both the police department and the city have implemented a number of new initiatives aimed at engaging local residents in the effort to curb gun violence and providing support after shooting incidents. They include increased patrols in heavily affected areas and a program to connect residents to social services.

And there are glimmers of hope in the data.

While there have been 47% more shootings compared to the 5-year-average and the number of murders is up as well, killings have not increased at remotely the same rate as shootings. And while the number of shootings this year has already surpassed last year’s total, the number of incidents in which someone was hit by gunfire remained slightly below that of last year as of Oct. 31.

“Our detectives are out there doing proactive work,” Mauk said.

But police work alone won’t solve the current crisis, Lam noted. Together with the city’s health department, the Urban Peace Institute is developing a gun violence response system designed to provide targeted care to victims and their families after a shooting.

Chavez, the Willmore building manager, said he isn’t sure what could or should be done about the gun violence in his neighborhood. After the shooting at the convenience store, one of the residents in his building is too afraid to go to the store at night, when shootings are more likely to happen. For now, he’s offered to make the trip for her.