When Peter Stark moved to the South Wrigley area three years ago, he knew the neighborhood occasionally dealt with gang activity and violent crime. But lately, the amount of gunfire near his home has shocked him.

“This is not normal,” Stark said, after two shootings occurred within earshot of his apartment on two consecutive nights in December. Since then, Stark has taken up listening to a police scanner and monitoring local Facebook groups to scrape together a better sense of what’s going on in his neighborhood.

Because the Long Beach Police Department does not regularly release statistics about shootings, it’s been hard for Stark to quantify his gut feeling about a spike in shootings, but data obtained by the Long Beach Post through public records requests shows he’s right: Gun violence in the city has been surging.

With a total of 381 shootings across the city, there were significantly more in 2020 than the previous four years, which had an annual average of 232 shootings. Those numbers include all shootings, regardless of whether anyone was hit by the gunfire.

(Click the year below to see how many shootings Long Beach recorded that were hit and no-hit.)

“The amount of violence impacting our city since the start of the year is alarming,” the Long Beach Police Officers Association, which represents rank-and-file officers, said in a Twitter post following a string of shootings last month.

The number of killings in Long Beach also increased last year but nowhere near as dramatically as in LA. Homicides are still a fraction of what they were in the 1990s when the city could record 100 per year.

What drives spikes in crime is an extremely complicated question, according to experts, compounded by the fact that the past year has been one like none other.

Gang conflicts, bail and sentencing reforms, economic insecurity—there are many possible reasons for an increase in gun violence. Add to that the pressure of a global pandemic that has cost millions of Californians their jobs, leaving them stuck at home for months and unsure how to pay their bills, and it becomes difficult to determine what’s behind the recent surge.

Still, police say the pandemic likely played a role, both because of a “zero bail” policy that was implemented in April to keep jail populations low, and because of the economic and social consequences stay-at-home orders have caused.

Zero bail, a policy that automatically sets bail at zero dollars for most misdemeanors and low-level felonies, has allowed repeat offenders to return to freedom more quickly, police say. Job losses and restrictions on social activities haven’t helped the situation either.

“People are home with nothing to do and no employment, so those might also be factors,” said LBPD spokesperson Arantxa Chavarria. 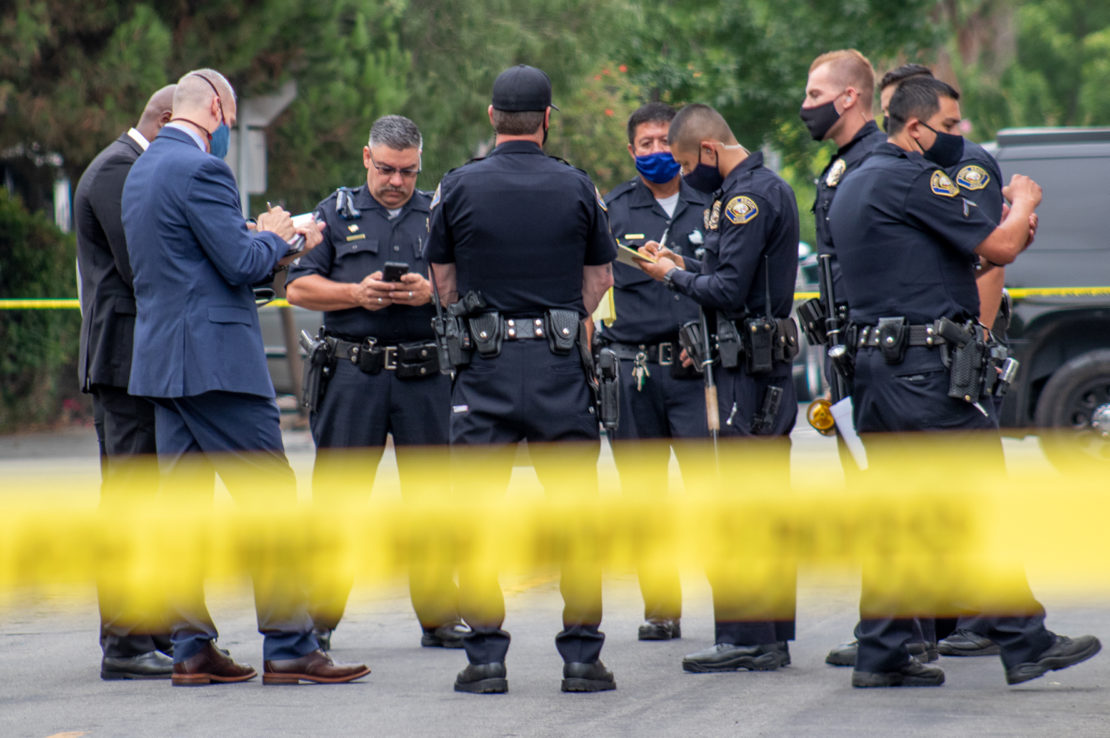 Long Beach Police Department officers speak with detectives in outside a homicide crime scene on Dawson Avenue and 10th Street on Sept. 8, 2020. Photo by Crystal Niebla.

Especially for young people, the current situation can be difficult, as many struggle to keep up with virtual schooling, miss out on opportunities to spend time with their peers and are confined to close quarters with their families for months.

“We also noticed a lot more subjects being described as juvenile,” Chavarria said.

In December, the slaying of a 14-year-old shook some city leaders.

Friends described the teen, Arthur Touch, as an engaged, bright and well-liked student at Poly High School before he was gunned down in what police suspect was a gang-related killing.

“This city and community failed to protect Arthur, and there is nothing that we can do now to change that,” City Councilwoman Suely Saro said in an Instagram post.

Police have arrested several suspects in the boy’s death, but Saro wrote that more needs to be done.

“Guns and violence are diseases that can spread if they are not tackled head on,” she said. “We owe it to Arthur and the victims of gun violence in Long Beach to address the root causes of these problems.”

Councilwoman Mary Zendejas, whose district includes the hard-hit Willmore and Washington neighborhoods, requested the city manager gather information on the issue and report on any current or potential strategies to fight the rise in gun violence and homicides.

“It’s not just in my district, there’s been an uptick in shootings throughout the city,” Zendejas said.

“That still is no excuse to let this be normalized,” she added. “Every single life that is taken away leaves a devastated family behind. Not just that, but it leaves our neighbors feeling unsafe.”

Along with Zendejas’ district and the Central Long Beach area where Arthur Touch was killed, North Long Beach has been a hotspot for gun violence, according to data from police.

“We live in a war zone. That’s what it feels like,” said Shirin Senegal, a North Long Beach resident and activist who lost her husband to gun violence in 2016.

(North and Central Long Beach were particularly affected by shootings in 2020. Zoom and click on the dots below to see information on all of the shootings last year in Long Beach.)

Despite his death, Senegal said she has never personally felt unsafe until the recent wave of gun violence arrived and continually triggered the painful memory of her loss.

Senegal said she has no doubt that the pandemic has exacerbated an already difficult situation, especially in low-income neighborhoods, where many business corridors remain shuttered and families are cooped up in small spaces.

“Blight and economic distress is tied to violence,” Senegal said.

To fight the current surge in shootings, Senegal is planning to recruit community members for neighborhood walk-throughs to combat graffiti and other vandalism, as well as train young people to intervene and help resolve conflicts on social media.

On Feb. 26, Senegal is hosting a virtual roundtable to kick off the initiative, which she hopes will help “create a community and government collaboration to address the issues that are driving gun violence.”

While Central and North Long Beach have borne the brunt of the increase in shootings over the past year, Senegal said that to address the issue long-term, residents of all Long Beach neighborhoods have to come together and acknowledge the impact gun violence has on the city overall. This, she noted, includes removing the stigma of “gang-related” shootings—a broad term that in Long Beach is often affixed with little context.

“This is going to have to be a joint effort,” Senegal said. “We’re one city and we affect each other.”