Adam May was standing on his balcony Monday night when a shooting erupted down the street near Orange Avenue and South Street in North Long Beach.

May yelled at his neighbors to get indoors and stay put. He said he grabbed his gun and braced for the worst.

The shooting left one woman dead and two other women injured. They were there with about 200 other people at a vigil for a Bellflower man who was fatally shot in the area Sunday night: Police said 49-year-old Archie Harris was walking with another man when the man opened fire on Harris for an unknown reason.

The morning after the vigil shooting, neighbors could see where bullets tore into palm trees and the walls of nearby apartment buildings. As police took down their yellow tape, May and his neighbors were able to leave their homes to inspect the damage and talk about the violence that transpired the night before. 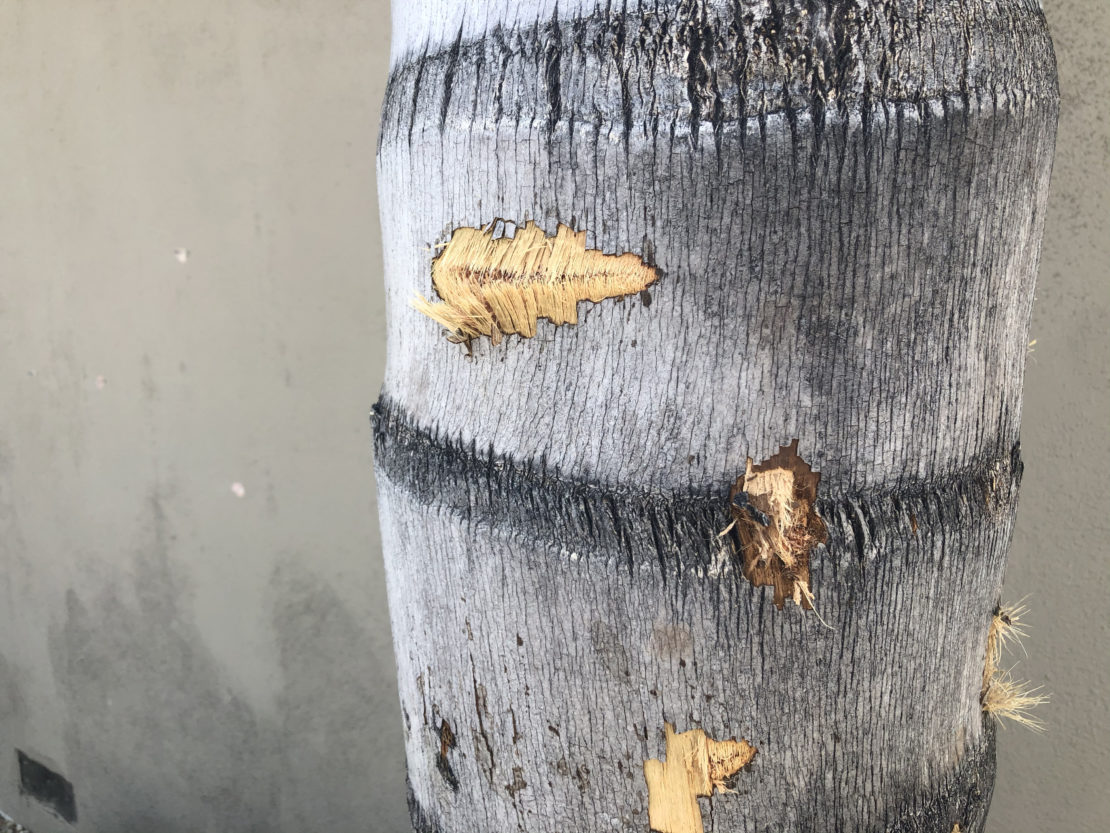 A palm tree outside an apartment complex near Orange Avenue and South Street with bullet holes from a deadly shooting that took place Monday, June 29, 2020. Photo by Sebastian Echeverry.

The vigil shooting came during a sudden wave of gun violence that’s recently hit a small section of North Long Beach and a larger spate of gunfire citywide.

In the past week, 12 people were wounded and four others killed during about a dozen different shootings across Long Beach.

Three of the deadly shootings—including Harris’ death and the vigil attack—have all happened within a mile of each other in the North Long Beach neighborhood around the Michelle Obama Library. A 16-year-old boy was also wounded in another shooting in the area Monday afternoon.

The most recent deadly attack was Tuesday around 10 p.m. when a 33-year-old man named Braulio Chavarin was gunned down near Adair Street and Elm Avenue, about 12 blocks from where May had yelled at his neighbors to take cover a night earlier.

Police said they found Chavarin on the ground near a sidewalk, shot to death for an unknown reason by a suspect who ran off.

Even before Chavarin’s death, neighbors were on edge.

Ma Dolores Baraja, said she’s lived in the neighborhood for 10 years, but about two years ago, she started feeling unsafe leaving her home after dark.

“We’re not confident to go out at night,” Baraja said in Spanish.

The Long Beach Police Department said they have arrested a suspect in Harris’ death, but the other assailants remain at large.

It’s not unheard of for shootings to come in clusters in Long Beach. Last summer eight shootings occurred one weekend, and although no one was killed, six people were wounded. At the time, police suspected at least part of that spike in violence was tied to a specific gang.

This week, some residents have speculated that the recent shootings are gang-related or racially driven, but police have not given any definitive information on motives.

LBPD spokesman Ivan Garcia confirmed at least some of them are gang-related, but he said the investigations are ongoing, so details have been held back from the public. 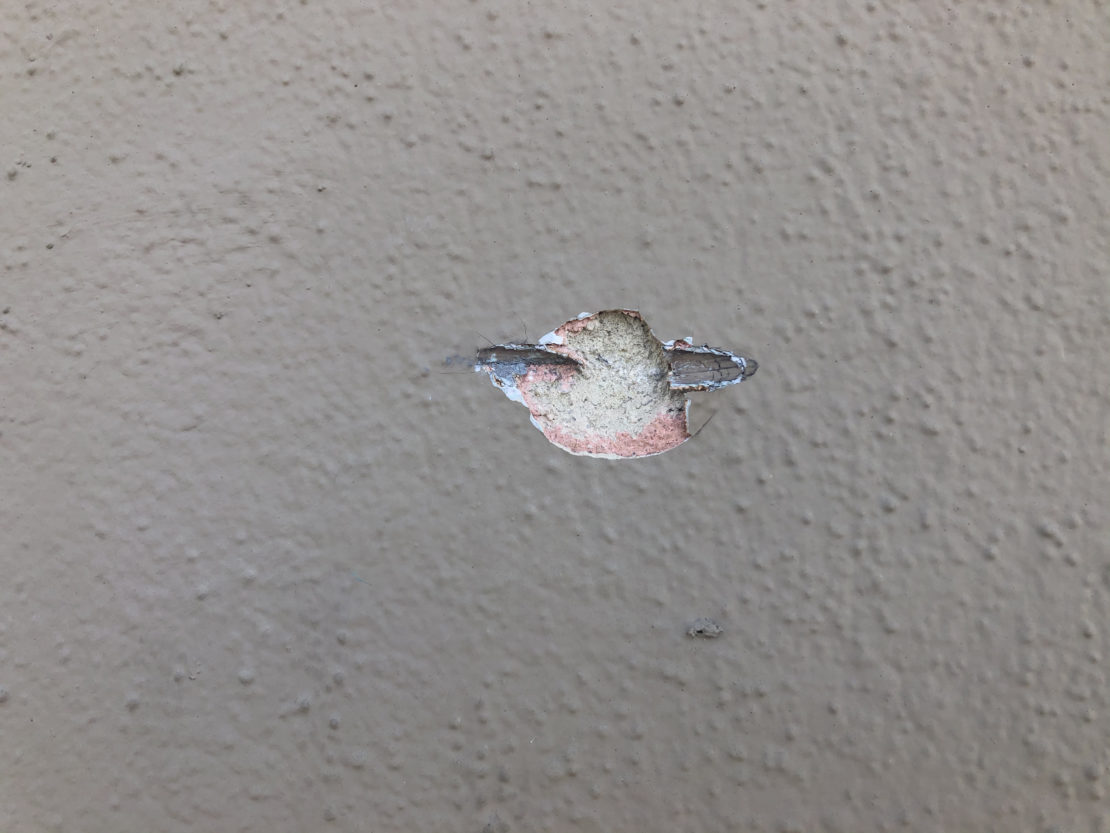 A bullet hole from a deadly shooting that took place outside an apartment complex near Orange Avenue and South Street Monday, June 29, 2020. Photo by Sebastian Echeverry.

One resident, who declined to give his name in order to protect himself from retaliation, said when the shooting started Monday, he helped some of the vigil’s attendees escape and seek shelter for a while. He said about 15 to 16 police officers were on the scene where the woman died.

“I don’t want to see anyone die like this,” he said.

Police said that shooting erupted after people attending the vigil got into some kind of dispute with a resident nearby.

“The dispute escalated into the resident’s window being broken and then into a shooting with multiple suspects firing in different directions,” police said.

The resulting tension was clear on Tuesday afternoon. One man seemed on edge, eyes darting from car to car as they drove by.

Pandemic obv has a lot of people on edge. As a resident of #northlongbeach I feel safe at home with my family but most are aware not to be around a certain area by a certain time. Obviously would like more patrolling to take place but that might lead to even more trouble.

Garcia, the police spokesman, said the LBPD is increasing patrols in the neighborhood.

“We’re having officers get out of their cars and talk to people,” he said.

Rex Richardson, the councilman who represents the area, said police are keeping him informed of the latest developments in the homicide investigations, but he could not share specifics.

“Investigators are doing a good job at connecting the dots here,” he said. 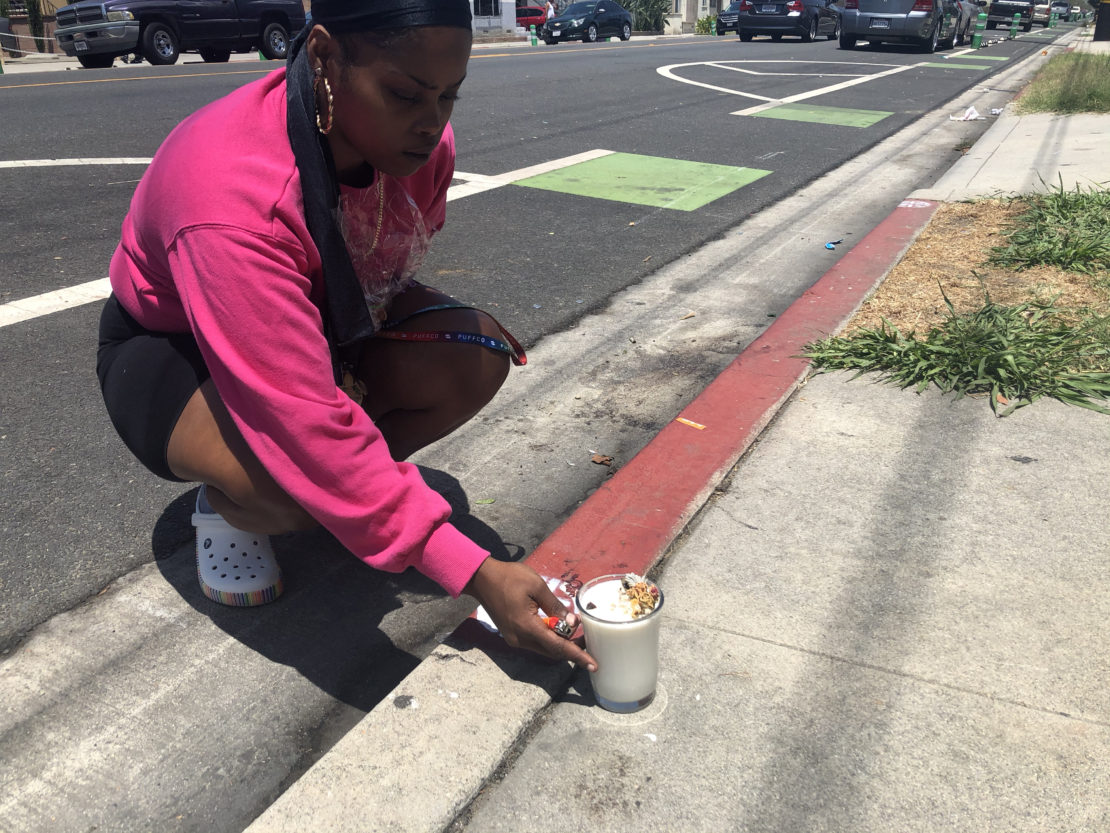 A woman places a candle where another woman was killed in a shooting near a vigil on Orange Avenue and South Street on Monday, June 29, 2020. Photo by Sebastian Echeverry.

Richardson believes that systemic issues like poverty and economic disparities rooted in the local community could fuel violent acts, such as shootings. Recent protests condemning police violence have placed a spotlight on systemic racism and inequity within government institutions.

One of the common demands is shifting a budget focus away from policing into community investment in hopes of fixing the systemic issue that Richardson and others believe exacerbate the problem.

On the ground, however, May said his reality feels disconnected from the nationwide conversation.

“Officials can talk all they want,” he said, “but it’s the citizens that get hurt in the end.”