A Long Beach firefighter received an unpaid 15-day suspension in 2019 for punching an elderly man he mistakenly believed was responsible for killing a fire captain, according to newly obtained records.

Bradley Robideaux, a former U.S. Marine who’d been a Long Beach firefighter for just under five years, threw the punch at 78-year-old Vladimir Tsipursky just minutes after Long Beach Fire Capt. David Rosa was shot at a high-rise senior-living apartment complex on the outskirts of Downtown Long Beach in 2018.

Robideaux had been in the ambulance that rushed Rosa to the hospital and among the gaggle of medical personnel in the emergency room who tended to the 45-year-old fire captain. When Robideaux saw Tsipursky being led into the hospital to be treated for his own gunshot wound to the abdomen, he hit Tsipursky in the face amid a scrum of LBFD employees before one pulled Robideaux away, video from the incident shows.

“I know it was wrong, it will always be wrong,” Robideaux later wrote in a letter that attempted to explain his perspective. “I may have thought that it would make me feel better, but that couldn’t be farther from the truth. If anything that has caused me more grief and shame.”

Fire officials originally proposed suspending Robideaux for 30 days, but, in May 2019, they cut that penalty in half as part of a settlement agreement that required Robideaux to pledge he wouldn’t appeal the discipline or sue the city.

The city of Long Beach disclosed the settlement agreement and the video Wednesday in response to a public records request from the Long Beach Post. It also provided a 371-page city-commissioned investigation by an outside law firm, which included Robideaux’s letter.

Together, they provide the most complete picture yet of the chaos and grief that unfolded at St. Mary Medical Center where firefighters rushed their beloved colleague, who would soon succumb to a mortal gunshot wound on the morning of June 25, 2018. 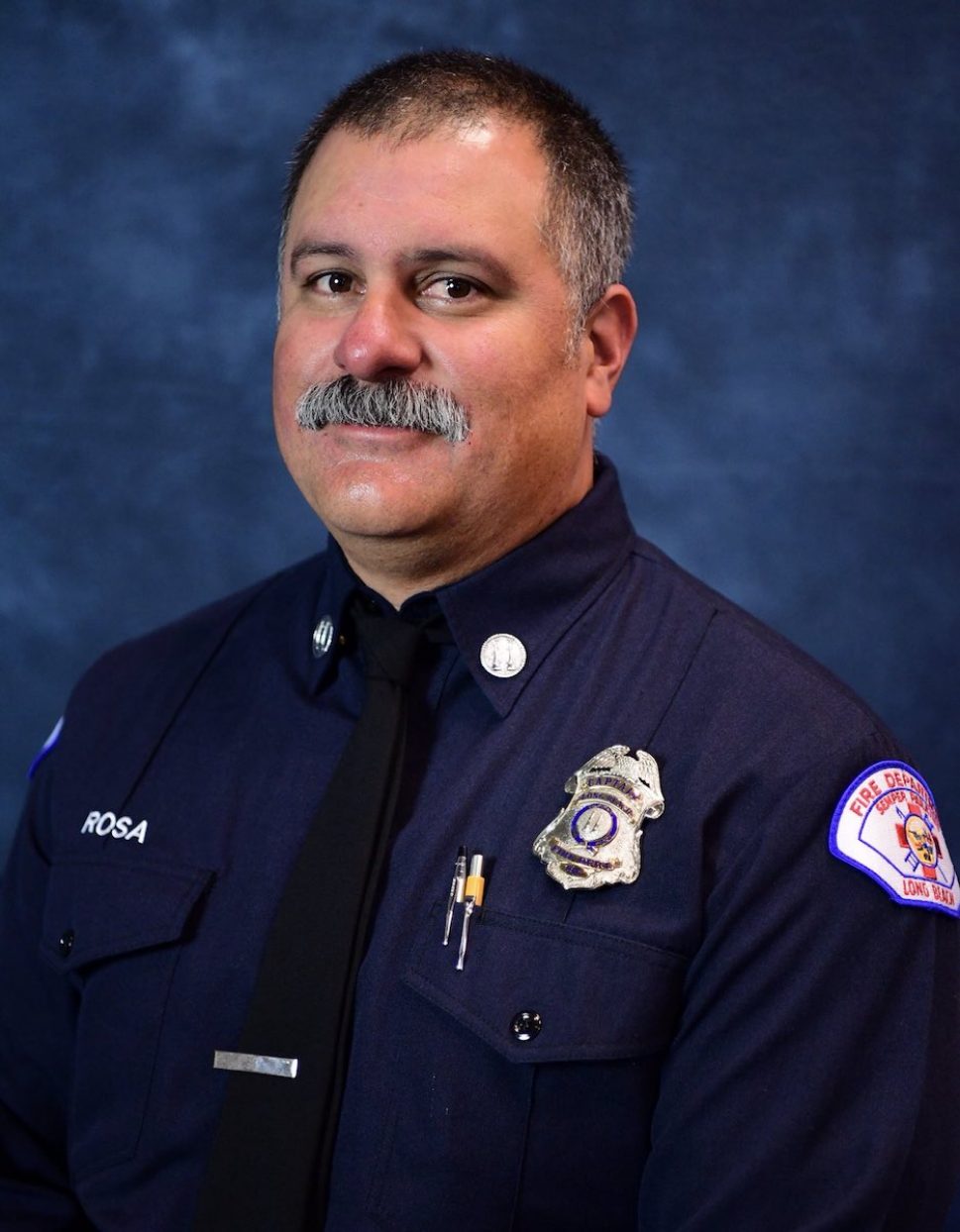 The mayhem began around 3:45 a.m. when 77-year-old Thomas Kim set off a homemade bomb in his second-floor apartment at the Covenant Manor senior apartment building, according to authorities, who said Kim later admitted he was trying to kill his upstairs neighbor after repeated arguments about noise.

When first responders arrived, Kim began firing rounds from a revolver. After his arrest, he explained he’d been scared, court documents say.

In jailhouse phone calls, Kim reportedly told his brother he’d been in a daze, his judgment clouded because of an advanced illness and the medication he was taking for it. Kim died in a jail’s hospital ward from natural causes before standing trial.

Kim’s gunfire that night wounded Rosa, Tsipursky and another firefighter, according to authorities. Rosa was the only one critically wounded. The bullet left him unresponsive, the city’s report says.

In Robideaux’s letter, he describes hearing the first gunshot and not comprehending what it was until the next rang out. Soon, he writes, he saw a pale, seemingly dazed firefighter come out of the building yelling, “I’m shot, I’m shot.”

After loading that firefighter on an engine, Robideaux and others carried Rosa on a gurney into an ambulance and rushed him within minutes to nearby St. Mary, where the frantic attempt to save his life continued.

“We had doctors and nurses in scrubs and dirt covered sweaty firefighters” all working on Rosa together, Robideaux wrote. 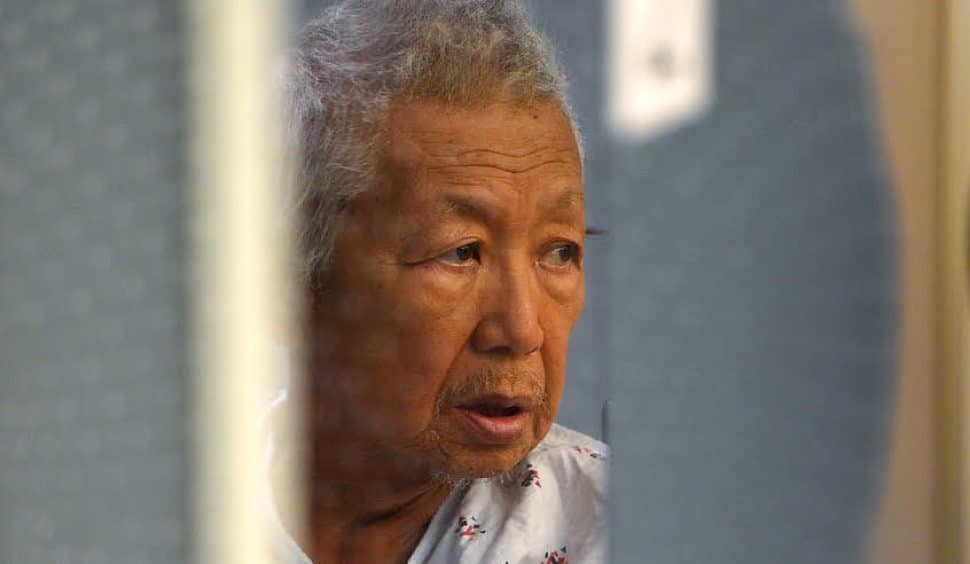 Thomas Kim, 77, at a court appearance where he faced charges he killed LBFD Capt. David Rosa. Photo by a pool photographer.

Tsipursky, who’d been shot in the chaos while he and his wife were evacuating after the explosion, was hurried to St. Mary as well. In their rush, firefighters took the odd step of putting him in the back of a fire truck, not an ambulance. On their way to the hospital, a transmission came over the dispatch system saying he may be the suspected shooter—a broadcast any firefighter with a radio could hear.

At St. Mary, two firefighters walked Tsipursky up the ramp toward the emergency room. As they did, other firefighters were “cursing” and “mobbing him,” according to an LBFD employee whose name is redacted in the city report.

Robideaux had been in the emergency room helping administer life support to Rosa when he was told to go outside and update his colleagues on Rosa’s condition.

When he stepped into the ambulance bay, he saw the group around Tsipursky and reportedly heard someone say, “This is the shooter, I have the shooter.”

As other firefighters accused Tsipursky of killing their “brother” and asked him “why,” according to the city’s report, Robideaux approached and punched him in the face. The blow left bruising on his right eye, according to prosecutors.

Tsipursky was then hustled inside for treatment where law enforcement officials stayed with him until word spread that a different man, Kim, had been arrested on suspicion of killing Rosa. 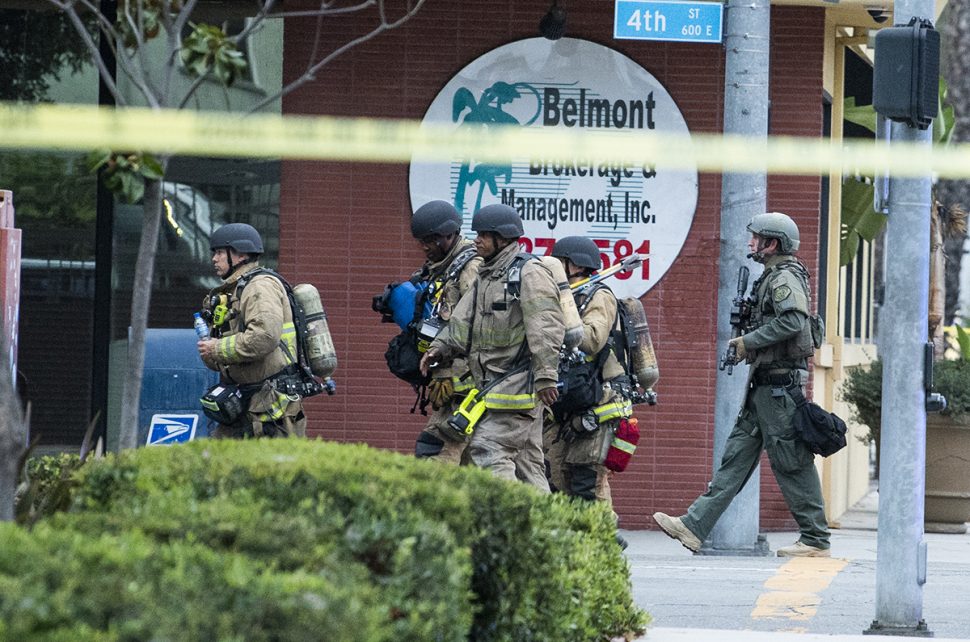 After getting a complaint from the hospital about Tsipursky’s treatment at the hands of first responders, police and fire officials soon began looking into what happened.

About a month later, Robideaux wrote his letter, confessing what he’d done, according to the city-commissioned report.

Upon first sight of Tsipursky, Robideaux wrote, he “felt great anger running through my body with a rush of unanswerable questions. This was the man who tried to kill two of my friends.”

Why, Robideaux said he thought, was Tsipursky still walking while Rosa was fighting for his life and another firefighter was seriously hurt?

“This wasn’t fair. This was a horrible person and those two in the ER are the good guys.”

In that moment, Robideaux threw the punch, only later finding out that he and the other firefighters were mistaken about Tsipursky’s role. He was, in fact, another victim.

In March, Long Beach paid $250,000 to settle a lawsuit from Tsipursky. Prosecutors decided not to charge Robideaux with a crime, something Tsipursky’s attorney alleged showed a double standard for how the law is applied to first responders.

In his letter, Robideaux repeatedly apologized, saying he lost control of his emotions and hopes he can somehow earn forgiveness, “but in no way do I expect it.”

“This act was a result of a uniquely emotional and stressful situation,” he wrote. “Seeing a fellow brother, who was ambushed while trying to protect those citizens, fighting for his life struck me in a way I have never been struck before.

‘I had to come to my senses:’ Firefighters reflect one year after death of beloved captain