For the second time in two weeks, more than a dozen residents marched around the Washington neighborhood, Friday night, to call attention to the high rates of violence in the area.

Jesus Esparza, president of the Washington Neighborhood Association who organized the demonstration, said in Spanish that residents simply want to be able to live their lives, go out in the neighborhood for a walk with their families without the fear that “someone is going to assault us, steal from us or that they are shooting and we can get hurt at that moment.”

The first protest, which took place earlier this month, was in response to the violent robbery of 51-year-old street vendor Bililfo Fernandez, who was selling elotes on Locust Avenue and 14th Street when he was attacked by two young men. Fernandez, who said he’s feeling much better since the attack, joined Friday’s march to show his continued support for the cause. 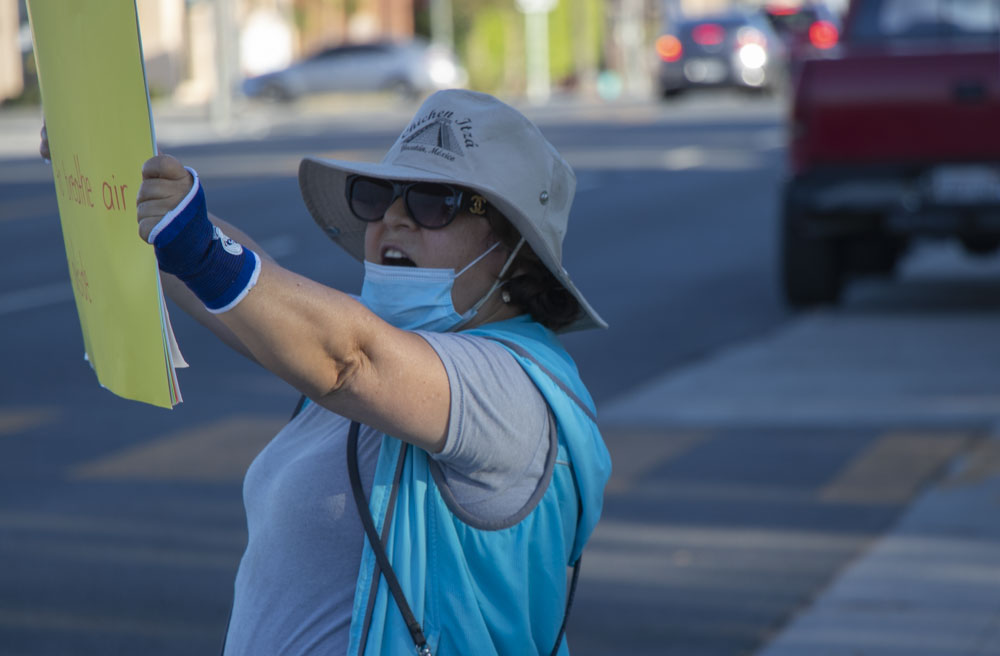 A protester chants at passing cars as part of a march against violence in the Washington Neighborhood in Long Beach on July 17, 2020. Photo by Crystal Niebla.

Protesters are hopeful that demonstrating will put pressure on city leaders to help solve the neighborhood’s violence problem. Residents have identified a variety of problems they attribute to the violence, such as a higher concentration of liquor stores, which, they say, attracts loitering, public intoxication, drug dealing and those experiencing homelessness.

While Esparza said he respects people experiencing homelessness and is not against them, the problem is that some have been seen using drugs, leaving needles on the ground, as well as defecating or urinating in public, sometimes in front of children.

During the march, demonstrators stopped in front of two liquor stores on Pacific Coast Highway between Pine and Pacific avenues. When they stopped in the parking lot of a check cashing business, a woman from an adjacent alley started yelling at the protesters then lifted her shirt and exposed her breasts.

Making their way onto Cedar Avenue, a group of men loitering by a building cheered protesters on. Shortly after, a police SUV began to drive slowly beside the marchers, asking them to get off the road, protesters said. David McGill, a bilingual lead chanter, said that he felt bullied, adding that the action seemed to confirm a sense of neglect residents have regarding the police.

As opposed to crimes in wealthier neighborhoods, crime in Black and Brown areas such as the Washington neighborhood are “treated like a common occurrence that’s not investigated,” McGill said. “They respond and they report, but they hardly investigate and they hardly ask around because they expect that to happen.” 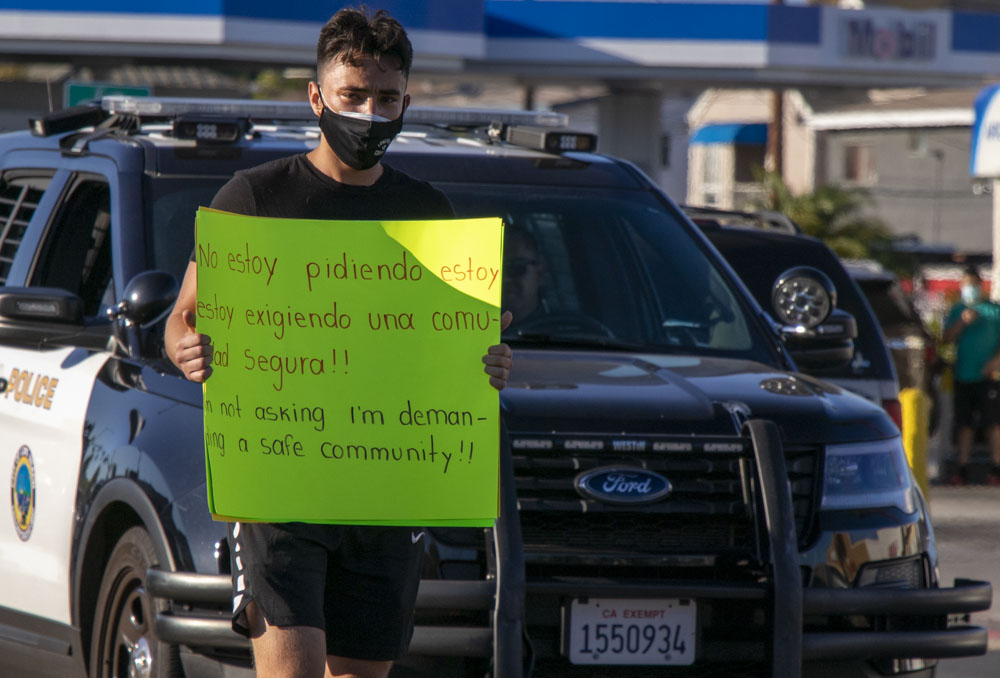 The community is communicating with city leaders to find and implement solutions, but residents like Lori Logan don’t think what they’re doing is enough. 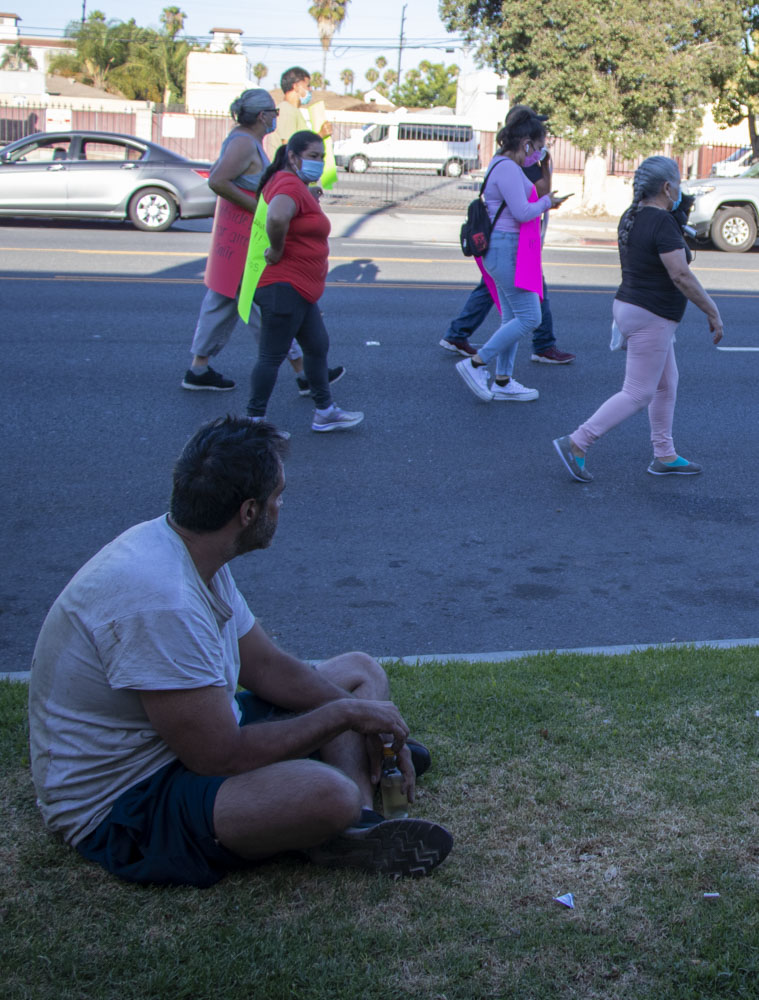 A man sitting on the sidewalk’s grass holding a bottle of liquor gazes upon a small group of marchers protesting against violence in the Washington Neighborhood in Long Beach on July 17, 2020. Photo by Crystal Niebla.

In a statement issued shortly after Fernandez’s attack, Long Beach police said its detectives “are actively investigating these incidents and following up on all leads to bring those responsible to justice.”

Before the pandemic, the Washington Neighborhood Association met monthly with police, but Logan described police during those meetings as being “distant.”

“They’re there just to say, ‘We showed up, we did something,’ but they’re not really doing anything,” said Logan, who added she hopes to create a relationship with the police that is “more interactive.” 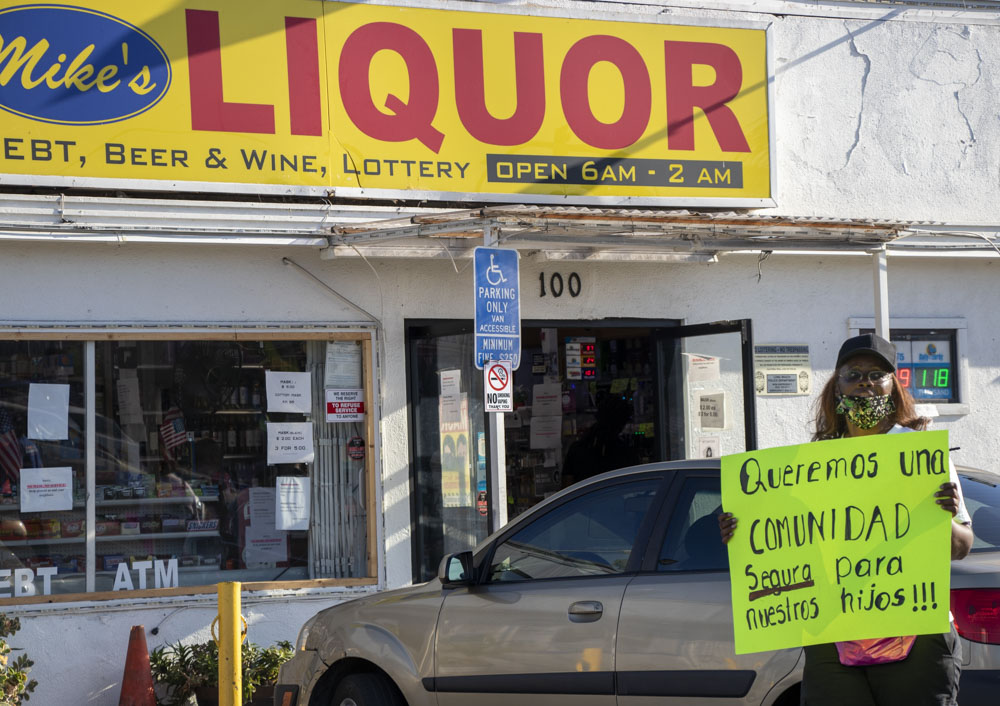 In response to an uptick of violence, Councilmembers Mary Zendejas, who represents the 1st District, including the Washington neighborhood, and Dee Andrews of the 6th District, were scheduled to co-host a public safety town hall meeting on July 8 with west and south division police commanders. But the event was canceled due to technical difficulties.

Zendejas’ Chief of Staff Raymond Morquecho said in an email that district offices are trying to reschedule a date for the end of the month.

For now, the Washington Neighborhood Association hopes to implement solutions that include working with the Department of Alcoholic Beverage Control and encouraging liquor store owners to enforce laws as licensees. Esparza said that his association has been meeting virtually with the city’s Health and Human Services department and nonprofits including Habitat for Humanity to talk about homelessness.

“If we all do our part, things will get a little better every day,” Esparza said in Spanish.