Police have arrested 12 people in connection with one of Long Beach’s worst mass shootings, and detectives believe they carried out the shocking crime based on a mistake, LBPD Chief Robert Luna said today.

When multiple gunmen opened fire on a backyard party last year, they believed they were shooting at a group of rival gang members, Luna said. In reality, they were killing and wounding victims who’d gathered for a co-worker’s Halloween-themed birthday party.

None of the people in the backyard—including the nine wounded and three killed—were gang members, the chief said.

Luna revealed the shooters’ alleged motive during a live-streamed news conference announcing detectives had arrested everyone believed to be involved in planning and executing the Oct. 29 attack.

“We now know this was a preplanned attack on what the suspects incorrectly believed to be a party of rival gang members,” Luna said.

Luna said the level of violence perpetrated that night stunned the community. And it’s still perplexing.

“None of this makes sense,” Luna said. “Because, for us as reasonable people, we would never think about firing a gun indiscriminately into a backyard where there’s people having a good time, where there’s a family that lives in the house.” 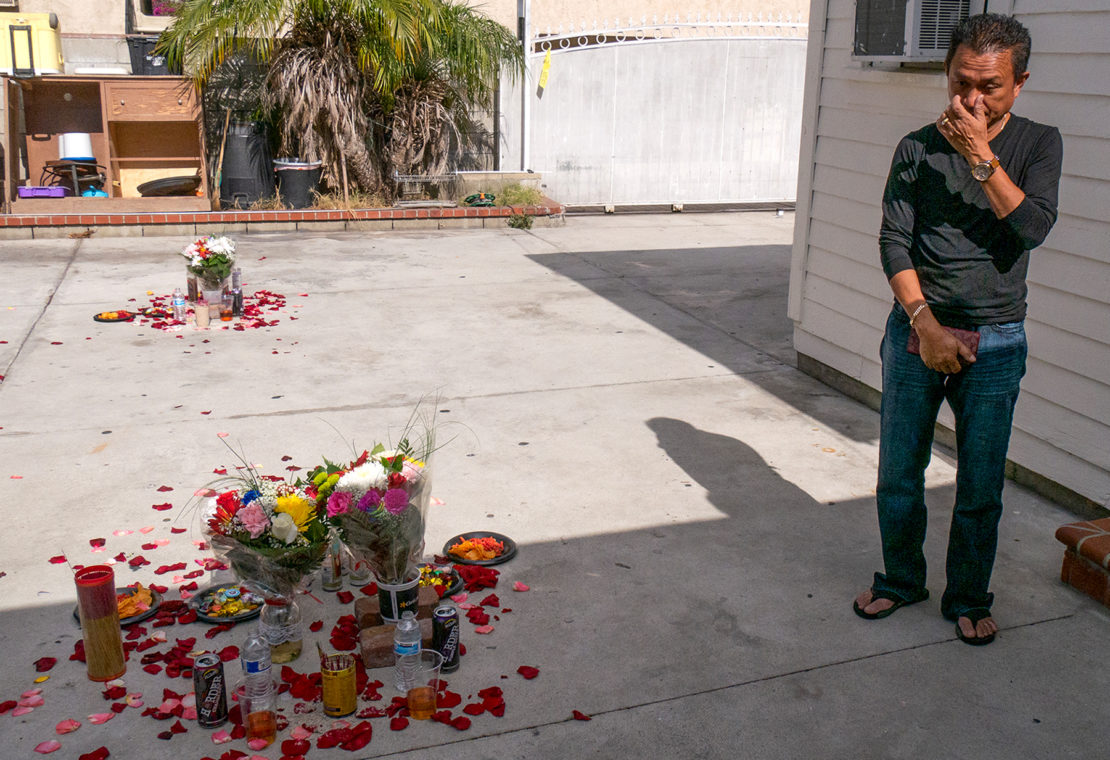 Chan Hou recounts the events of a shooting in his backyard. Photo by Steven Smith.

Police did not give details about what they think caused the shooters to mistakenly target the backyard party in the Rose Park neighborhood. Luna said more information would be forthcoming as the case progresses.

Since the shooting, Luna said detectives have spent months canvassing for witnesses and piecing together security camera footage to get an idea of what happened.

They believe the suspects traveled about 7 miles to get to the party. They allegedly drove in a caravan of three vehicles down from North Long Beach before they stopped near Seventh Street and Temple Avenue where eight people got out. The group then walked up an alley toward the backyard’s fence before three of them opened fire and then fled around 10:45 p.m., according to the LBPD.

The morning after the shooting, Luna said it was one of the worst he’d ever seen in his 34-year career.

He echoed that sentiment today: “Cowards shamelessly shooting into a backyard, and look how many victims we had. It’s a very sad case.”

Those eight suspects who walked up to the fence are now each charged with three counts of murder and nine counts attempted murder. Most of the eight appeared in court Tuesday afternoon, wearing handcuffs and medical masks. None of them entered a plea. That portion of the proceedings was postponed until Sept. 29 when they can all be present.

The remaining four defendants are expected to be charged with various weapons-related counts, according to prosecutors. It’s not clear yet what role they allegedly played in the crime.

The sweeping arrests came in a flurry at the beginning of this month. Between Sept. 2 and Sept. 5, police arrested 10 of the suspects as they served a barrage of more than a dozen search warrants in Long Beach, San Jose, Ontario, Redlands, Fresno, Paramount and other cities across the state, the chief said. 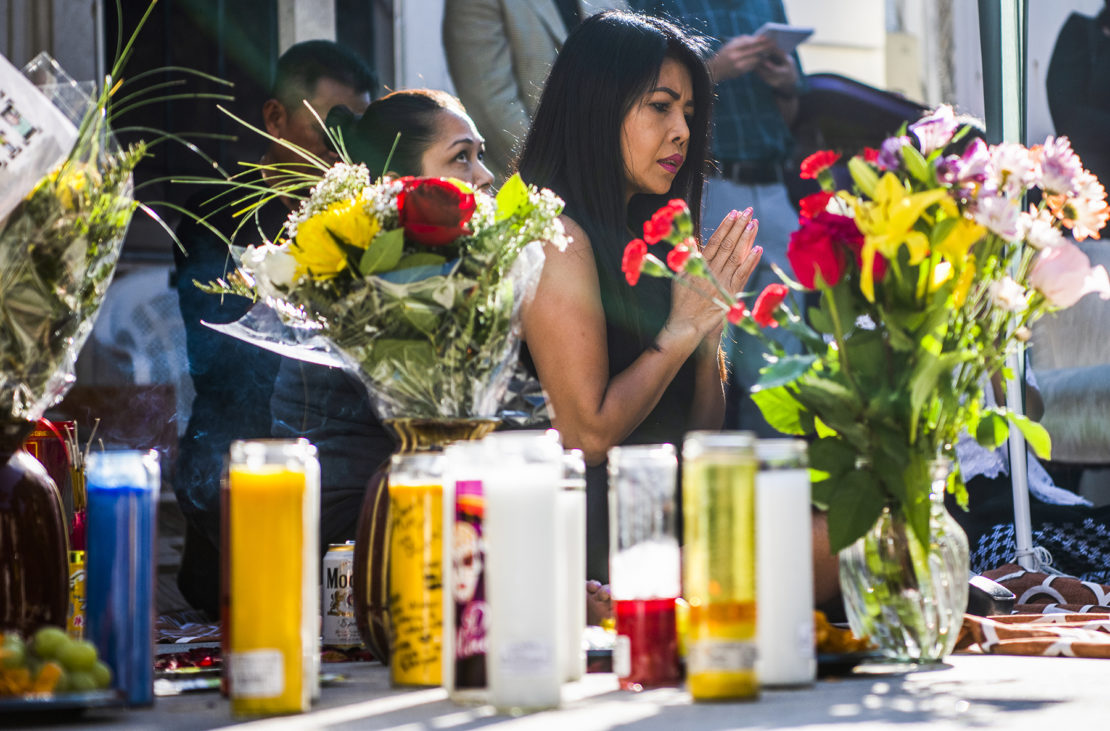 Sithy Yi knells by a memorial during a 7th Day Blessing at a home where 9 people where injured and 3 killed after a mass shooting during a Halloween-themed birthday party in Long Beach Tuesday November 5, 2019. Photo by Thomas R. Cordova.

Two other people connected to the mass shooting were already in custody on unrelated charges, according to Luna.

Danny Sourn, 26, of Long Beach, is accused of murder in a 2018 shooting. And 25-year-old Long Beach resident Jeremy Penh was arrested on suspicion of attempted murder earlier this year.

Long, Thik, Sim, Penh, Williams, Sourn, Sam and Johnson are the defendants facing murder and attempted murder charges. Because they’re accused of murdering multiple people, prosecutors could seek the death penalty, but authorities haven’t decided yet whether they will.

Police released the list of arrestees Tuesday morning, but Luna said he would not say their names at the news conference.

“I refuse to talk about suspects here on camera,” he said. “I’m going to focus on the victims. I think as a community, as a society we need to focus more on victims, not the suspects.”

Until recently, the surviving victims had little to no information about why they’d been shot.

Jasmine Johnson, who is working to overcome paralysis after being hit in the neck, told the Post in August that she had no warning before the gunfire began.

“It was kind of like the Titanic I guess,” she said about the party. “It started out good and fun and ended in a nightmare.”

The family who threw the party that night has since moved out of their home, fleeing the memory of the violence that made their home feel like a cemetery.