When a young Wally Hebeish told his parents that he wanted to become a police officer, they were surprised.

Other members of his family, which had emigrated to Long Beach from Egypt, were pursuing careers in law, accounting or medicine. He was the first to consider a career in law enforcement.

“I think my father thought I would be an engineer like he was and my mother probably thought I was going to be living at home until I was 40,” Hebeish said with a laugh.

But Hebeish, 52, says it was a logical path for him based on the example his parents set: “They were very much about respecting others and they taught me that and so that was kind of a foundation.”

Ultimately, Hebeish said, they were very supportive, but that they had a requirement: Get your college degree first in case this whole policing thing doesn’t work out.

Fast-forward several decades later, and Hebeish is now Long Beach’s new chief of police, replacing Robert Luna who retired at the end of 2021. He’s the first Arab- and Muslim-American to lead the department.

“It is an incredible honor and privilege for me to be sitting in this chair,” Hebeish said. “It is really a culmination of everything that I desired to do in the spirit of service, not necessarily in being the chief of police, but wanting to serve, and that came from my upbringing and what my parents taught me.”

Hebeish arrives at an unprecedented moment for policing. After the murder of George Floyd, he’s being met by sweeping calls for reform coupled with a rise in violent crime last year and a continuing pandemic.

In an interview last week, he seemed to walk a narrow path through the upheaval: acknowledging a need for change in his chosen profession while praising the work his officers have done.

“Policing continues to evolve. It needs to evolve,” he said. “I think if you if you look back at the challenges that we’ve had over the past few years, and really understanding that there is some historic trauma related to policing in this country that needs to be addressed, and having thoughtful, meaningful input from employees and community members to make those changes in a very measured and deliberate way—that’s for the betterment of the entire country, the community and the profession.”

But, he said, people should know there’s never been a harder time to be a cop. LBPD staff’s resilience in the face of intense criticism is one of the reasons he applied to be chief.

“I still believe in this profession,” he said.

Hebeish said his early experiences in the city shaped his perspective on what kind of department he wants to lead. 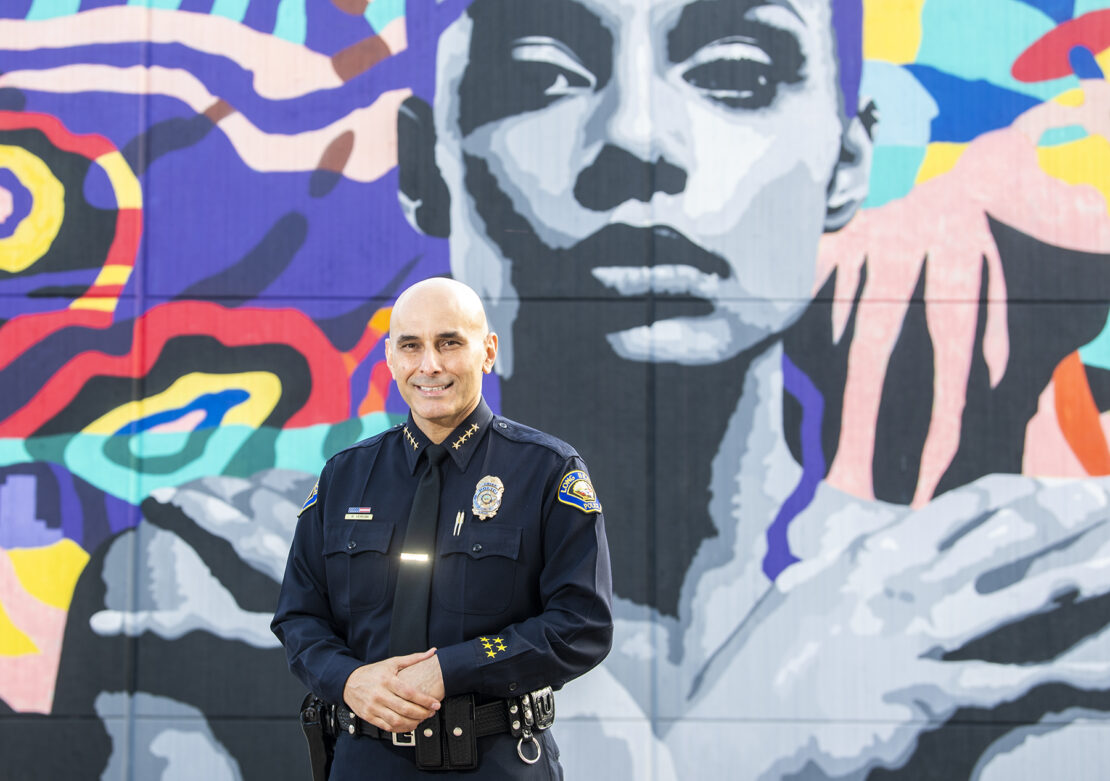 He was born in Cairo, Egypt, but grew up in North Long Beach’s Parwood Apartments near Davenport Park. He attended Collins Elementary and graduated from Cal State Long Beach with a bachelor’s in criminal justice.

His earliest encounter with law enforcement came through his mother, who taught at Long Beach City College and Millikan High School. A student in one of her classes happened to be married to a Long Beach police officer.

One day, the officer offered to take a young Hebeish and his brother to the police shooting range. This was Hebeish’s first interaction with the Long Beach Police Department and his earliest notion of knowing his future was in law enforcement.

But growing up in North Long Beach didn’t always offer the best experiences with police in Southern California due to the nature of policing back then, he said. Hebeish’s family moved to North Long Beach in the ’70s, when community policing was still growing. At the same time, gang activity was too.

“There were some good interactions and bad interactions,” Hebeish said about his experiences with police. “And I think part of that was always kind of in the back of my mind. I wanted to be part of the future of what policing meant to everybody.”

When Hebeish graduated from Cal State Long Beach with his degree in criminal justice, he quickly applied to the police academy.

He started his career in 1994 with the Orange County Sheriff’s Department in the custody division before quickly moving to the LBPD and becoming a narcotics detective. But he never expected to be running the show as chief.

“When I came into policing, the only thought in my mind was being a police officer and doing things to help the community,” Hebeish said. “I had mentors in the community and in this department that really pushed me to go further in my career.”

While an executive with the LBPD, Hebeish implemented strategies to reduce crime, including addressing the nationwide increase in gun violence. He has built up the Police Department’s quality-of-life team focused on homelessness. And, he has worked on initiatives to build stronger police-community relationships in Long Beach.

One of his top priorities as chief is to continue investing in the wellness of his employees after several officers have died by suicide in recent years.

The department has already put an emphasis on mental health awareness and counseling resources. Hebeish wants more support through initiatives like a peer support program and partnerships with the city’s Health Department. He also hopes to work with the Health Department to develop new ways to reduce gun violence in the city, which has seen a spike in shootings.

Amid a recent surge in COVID-19 cases across Long Beach, Hebeish also encourages all his employees to get vaccinated. LBPD has struggled to bring up vaccination rates among its officers.

“I want a 100% healthy workforce and in a way that keeps our employees and our community healthy and safe,” Hebeish said. He declined to take a position on whether police officers should be mandated to the vaccine or risk losing their jobs, something the department has deferred comment on to the City Manager’s office, which hasn’t yet implemented a promised vaccine mandate for city workers.

One early test for Hebeish as a police executive came before he ever assumed the title of chief. For several months, while assistant chief, he’s defended the department’s use of facial recognition technology amid questions from the city’s Technology and Innovation Commission about whether it can be used ethically in light of concerns about racial bias in its results.

Hebeish believes that the facial recognition program can be useful in limited circumstances: helping bring closure to victims of violent crime and even some lower-level crimes. He cited the anti-semitic hate symbols that were graffitied onto the Martin Luther King Jr. statue and the burning of the rainbow-colored lifeguard tower last year as examples where it could be appropriate.

“I’m not talking about mass surveillance or over-policing,” Hebeish said. “I’m talking about utilizing a tool that has regulations, oversight and measures in place to use it in a very lawful and ethical manner.”

Hebeish said he was willing to repeatedly appear in front of city commissioners and City Council members last year to answer questions about facial recognition technology because he’s committed to transparency and accountability for the department. He promised to weigh the concerns of people who believe facial recognition technology is dangerous, but, ultimately, he said, the burden is on him to chart the best path forward for the department.

Editor’s note: This story was updated to correct what division Hebeish started in at the Orange County Sheriff’s Department.