Neighbors got their first glimpse Thursday of the playground equipment that could eventually replace the old structures at Admiral Kidd Park that were destroyed in a fire more than two months ago.

“This one is going to be really special, and it’s gonna be in West Long Beach,” Councilman Roberto Uranga, whose district includes Admiral Kidd Park, said during a press conference.

Eric Lewis, the recreational consultant representative for Rec West, the playground manufacturer, said that the new playground will maintain its nautical theme and some of the same equipment such as their Sway Fun glider and swings. 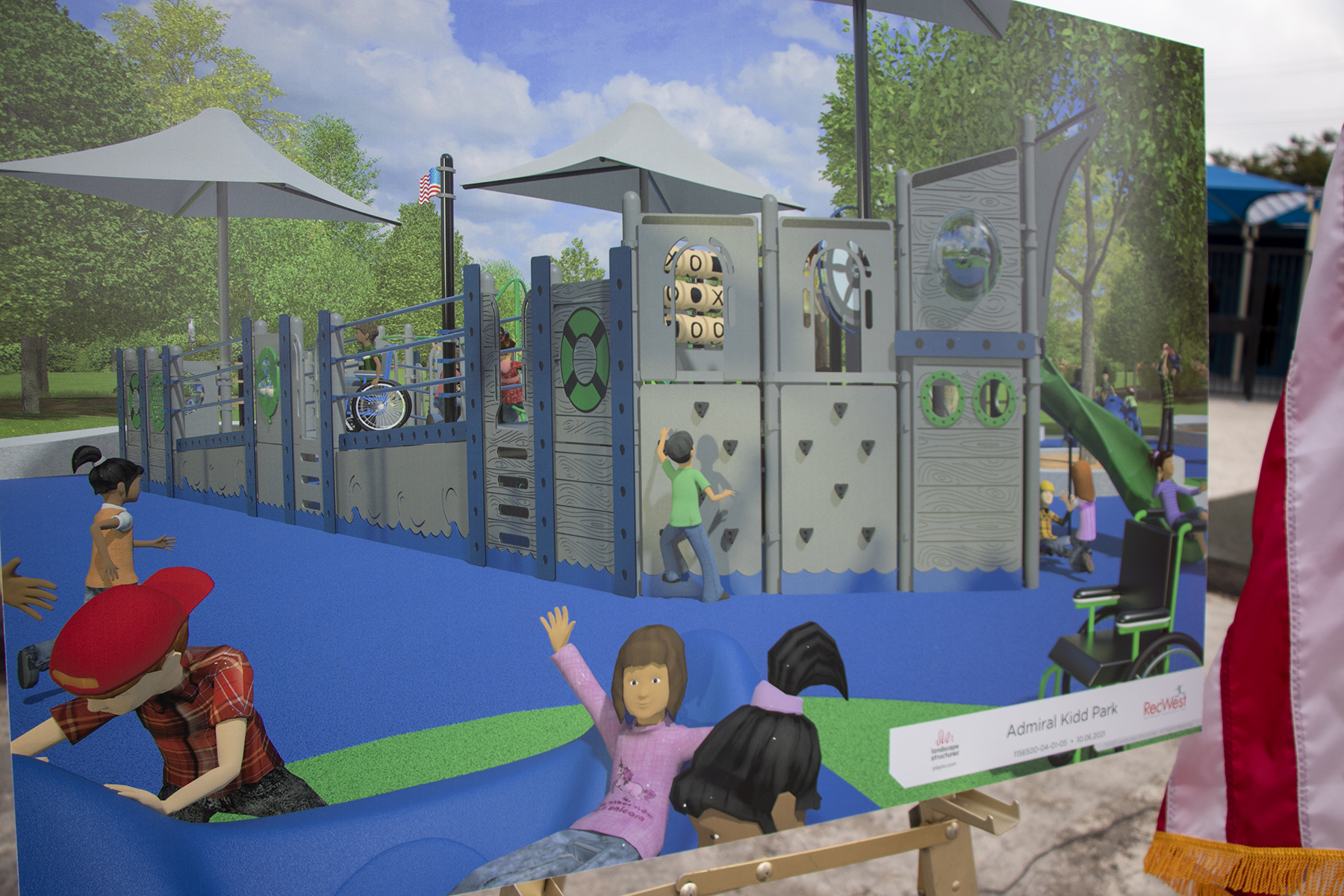 A rendering of a new Admiral Kidd Park playground was displayed during a press conference on Thursday, Oct. 7, 2021. Photo by Crystal Niebla.

New additions to the playground are expected to include a suspended boogie board, a dome with holes meant for hiding and climbing, a spinner and a zip line, Lewis said. Equipment accommodations for children with disabilities will include ramps, lowered seats or steps he called “transfer points” for those in wheelchairs, more “play panels” that include brail, periscopes and bells, talking tubes and shaded benches.

“It makes this playground more playable and more inclusive,” Lewis said. The renderings of the playground are of the manufacturer’s initial concept, which might still be subject to tweaks in the future, he added.

The old playground, which was built for kids 5 to 12, was destroyed by a fire in July. Long Beach Fire Department spokesman Capt. Jack Crabtree said that there is still no update on the investigation into what caused the fire or whether it was intentionally set. Other playground equipment for younger ages and the swings were undamaged. 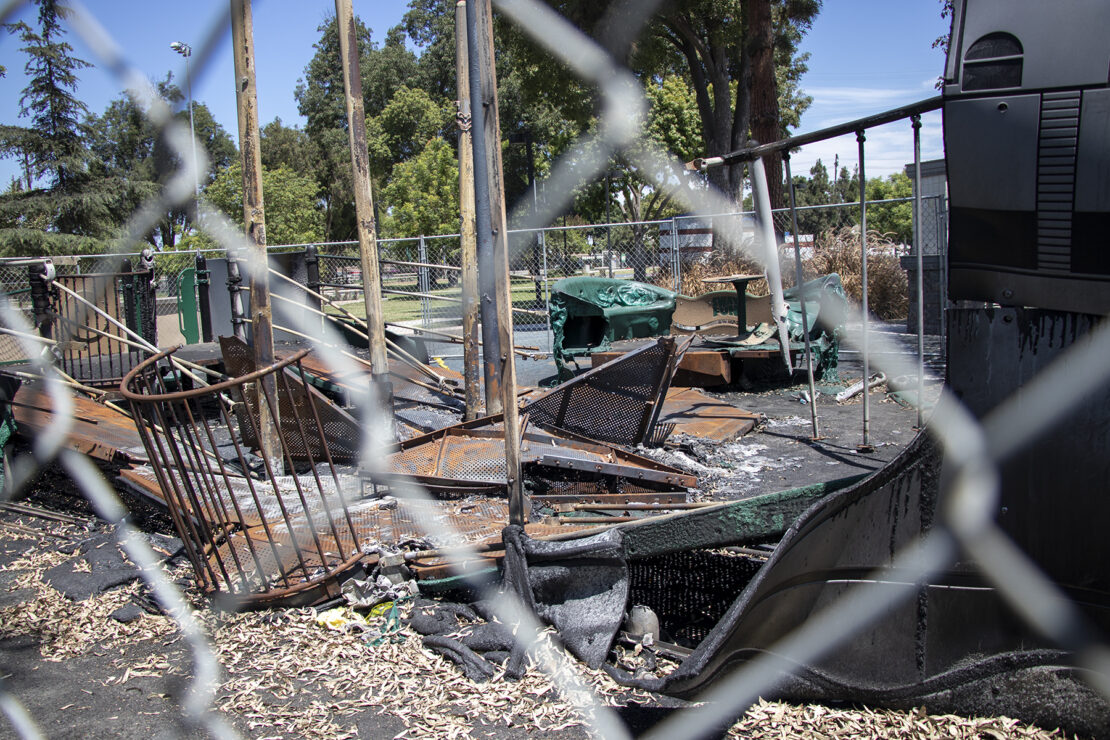 “Playgrounds are not cheap,” Trinka Rowsell, executive director of Partners of Parks, said.

Rowsell called on the public to make donations, offering incentives including commemorative bricks that will be installed on the sidewalk for those who donate at least $300. Smaller donations can be made here. 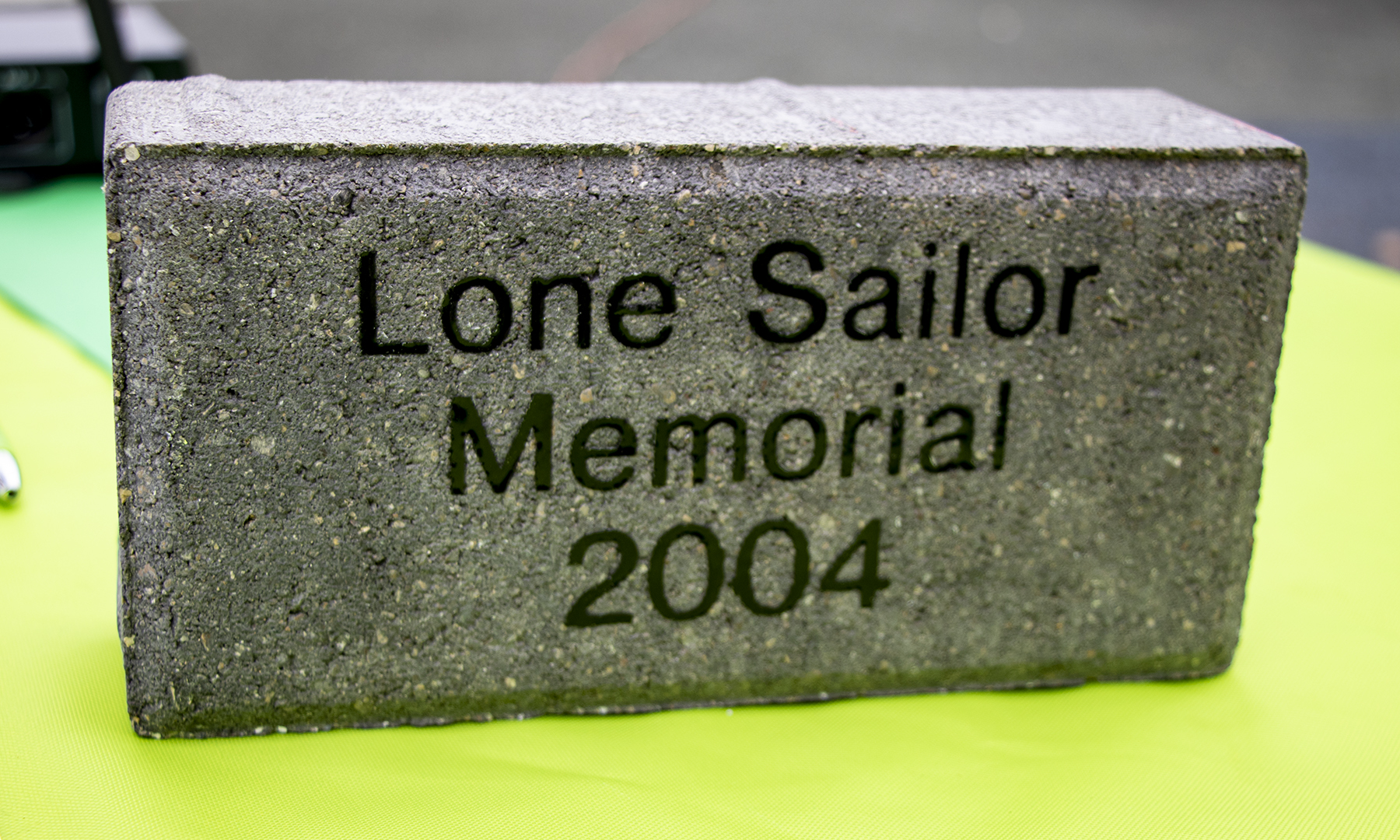 Local nonprofit Partners of Parks displays a commemorative brick sample as part of a donation drive to raise funds for a playground during a press conference at Admiral Kidd Park in West Long Beach on Thursday, Oct. 7, 2021. Photo by Crystal Niebla.

So far, she said that they have raised $3,000 in bricks and individual donors. A $25,000 donation from Long Beach Economic Partnership is still pending as they’re working with the city to administer it, she said. Rowsell added that if there are any excess funds, they would be used for programming at the park.

In terms of the timeline, Rowsell said that after the money is raised and the order is placed for the playground, it will take another six months to build the playground.

Uranga said the playground burned at a crucial time when kids really needed it after stay-at-home orders triggered by the COVID-19 pandemic.

Fire damage to Westside playground is a ‘complete loss;’ manufacturer hopes to replace within the year