Column: 2020 was a memorable year for all the wrong reasons • Long Beach Post News
- ADVERTISEMENT -

Remember the other years? And how, when each troubled one finally and mercifully sputtered to its end, we gleefully celebrated its death. We sang and drank champagne and danced happily on its grave with the notion that we somehow survived its terror and rage and fully expected that the following year would be a lot better.

Yeah, we did that when 2019 died, too. Surely 2020 would be better than a year plagued by worldwide terrorism, climate change gathering steam, “bomb cyclone” blizzards, hurricanes, typhoons, locusts, bombings, riots and, farther down below the fold, a little item about how a coronavirus was discovered in Wuhan, China.

So, no, surely 2020 turned out to be the worst one yet for many millions of people. If nothing else, it’s unified the world in a hatred for a year expressed in every language.

But let’s scroll back the focus and just look at Long Beach, a city that relies heavily on dining and conventions and which, as the year dawned, was riding high on its increasing reputation as a dining mecca while Ocean Boulevard was making a racket with construction going at a frantic pace and new high rises growing ever closer to the sun.

Maybe, we thought in our adorable naivete, 2020 would be the year when nothing would go wrong.

Then COVID came—and, yep—everything went wrong, with some of the saddest news hitting close to home with the coronavirus deaths of Mayor Robert Garcia’s mother Gaby O’Donnell and stepfather Greg O’Donnell, just two weeks apart. It was a personal tragedy that went national, with both network and cable news channels interviewing Garcia about his loss.

As of Monday, the city has confirmed 30,600 cases of COVID-19, and 358 deaths. And no, it’s not just the flu; consider that in the 2019-2020 flu season, the city documented just under 1,500 cases of influenza and 11 deaths (and that was a bad flu year; the prior season the city saw just under 500 cases and eight deaths). From Long Beach’s first COVID death on March 23, it was just 20 days later when it hit its 12th death due to the coronavirus, surpassing the year’s total flu-related deaths. 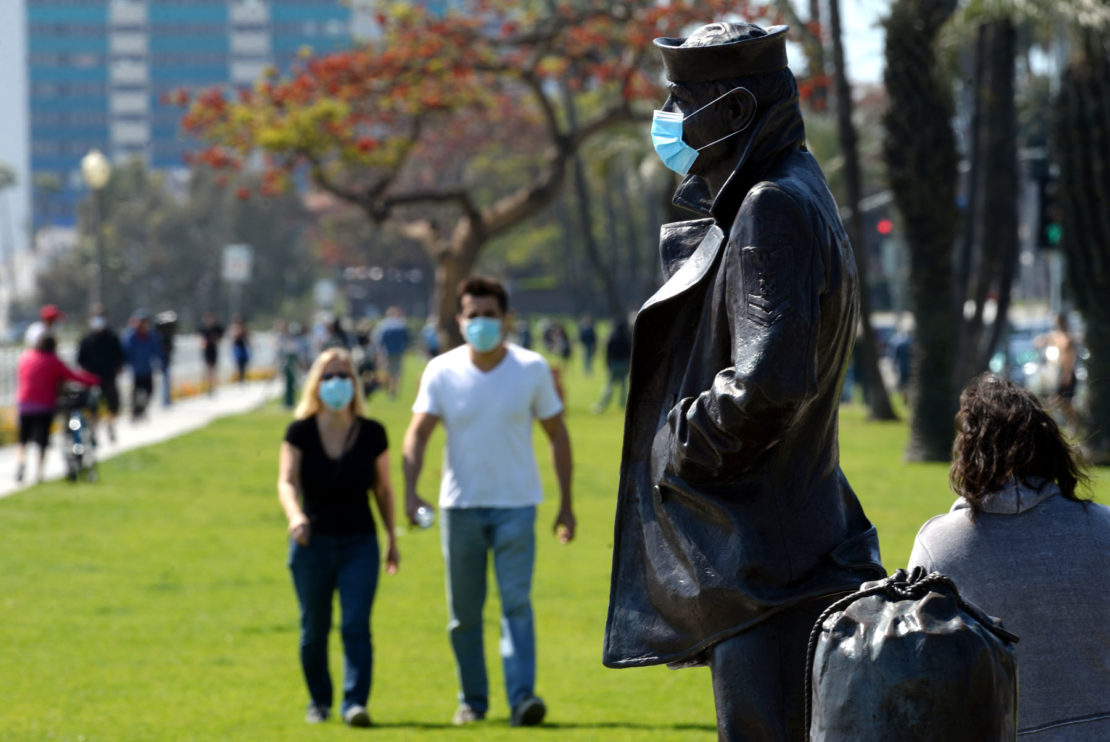 But let’s take a break from COVID for a sec, because, while it’s pretty much dominated every one of our daily lives since St. Patrick’s Day, there was more to the story of Long Beach in 2020 than the outsize disaster caused by a 60-140 nanometer virus.

Some great news for those of us who faithfully root for the home team, the Lakers and the Dodgers both won championships in 2020, mirroring the 1988 sports season, the last time both teams won in the same year. True, both teams played odd seasons—one stretching over almost an entire year and the other abbreviated—but we’re not sewing any asterisks on their championship banners.

Sadly, the Lakers’ win was tempered by the death earlier in the year of one of the team’s most beloved athletes, Kobe Bryant, who died in a helicopter crash in Calabasas along with his 13-year-old daughter Gianna and six other passengers and the pilot. And the Dodgers’ win was scuffed up a bit a bit by third-baseman Justin Turner spraying COVID droplets like a Rainbird sprinkler during the World Series victory celebration on the field.

While a majority of businesses were ravaged by COVID, some sectors survived and even thrived. Obviously, if you have a large toilet-paper or hand-sanitizer presence in your stock portfolio, you’re feeling pretty smug now, but other items were flying off the shelves as well in 2020, perhaps most notably guns and houses.

As far back as March, lines stretched around the block at gun stores everywhere with buyers—many of them first-time gun-owners—standing in long lines waiting to strip the stores’ shelves clean of firearms and ammo, all selling at record-breaking paces long before the more dismal days of the pandemic. Turner’s Outdoorsman in Signal Hill saw long lines virtually every day with a frightened public looking to protect themselves from whatever lurking peril they were imagining might come in the wake of riots and disease.

People line up outside the Turner’s Outdoorsmen store in Signal Hill on Monday, March 16, 2020. Photo by Thomas R. Cordova.

And with long stretches of stay-home mandates and self-quarantine, Long Beach residents were growing sick of their residences and setting out to buy new homes, perhaps with a pool to wear the kids out or one with additional rooms for home offices. The rush for property hit both the high end, where people were snapping up multi-million homes in Naples and the Peninsula, as well as the former middle-class areas in East Long Beach, from Los Altos to the Plaza, where anything priced under a million dollars was snatched up quickly, often at well above asking price. As one Realtor noted, people are bored, sick of restrictions and “all they can do is buy a house.”

It was not, however, a great year for municipal finances, nor for the majority of restaurants, retail, caterers, event planners, conventioneers, entertainment and myriad other industries. The city’s unemployment rate reached as high as 30%, and officials struggled to plug a nearly $40 million budget deficit, ultimately settling on furloughs and cuts in personnel and services in just about every department.

Closures of businesses, especially restaurants, was a near weekly occurrence during the year, starting most startlingly with the May closure of Rock Bottom Brewery, a longtime favorite for conventioneers and Downtown office workers, anchoring the hot spot of Pine Avenue and Ocean Boulevard. In other restaurant news, Chuck E. Cheese in Downtown also closed, leaving the city without a decent place to enjoy a pizza in a ball pit.

It was a roller-coaster year for restaurateurs who were first ordered to close for indoor dining, then came a reprieve when many restaurants set up parklets for outdoor dining, then, those, too were closed, and eateries were left with solely take-out ordering.

Much more rare were announcements of openings in 2020, and one of the big reveals of the year was Amazon Fresh coming to East Long Beach on Spring Street and Palo Verde Avenue. The mysterious demolition of a Haggen Grocery and the early days of the construction of its replacement store spurred speculation and wish lists of what the new store would be—Aldi, Daiso, Trader Joe’s, Whole Foods, a bowling alley or a gym—the announcement of the Amazon Fresh in September brought an end to the frantic Nextdoor guessing game.

There were a couple of significant departures from Long Beach Airport this year. Most significant was JetBlue leaving LGB with its final flight to and from Salt Lake City in October before consolidating its operations at LAX. Many residents blamed the city for chasing the airline out of town, nor were many residents pleased with the sudden departure of Gulfstream’s decision to remove its service and completions operations from the airport, along with 700 jobs, a couple of weeks later.

Long Beach achieved, or attempted to achieve, a bit more wokeness in 2020. As institutions nationally were jettisoning names of former leaders and mascots with unsavory connotations, Cal State Long Beach gave the heave-ho to its longtime mascot Prospector Pete in 2019 on account of the treatment of early California gold miners toward indigenous people. In 2020 Pete was replaced by Elbee, a shark, as a tribute to the campus’ renowned shark lab. The university retained the 49ers name, though it updated it by a century to refer not to the brutal miners of 1849, but, rather, to 1949, the year of the college’s founding.

In the lower grades, online petitions were circulated to change the names of Wilson and Jordan high schools because of racism, eugenics, misogyny and other issues surrounding those figures.

Compounding the COVID crisis and its accompanying problems, 2020 was a year of unrest and occasional violence in Long Beach and several other cities nationally, with crowds angered over the killing of George Floyd, a Black man, by Minneapolis police in late May. 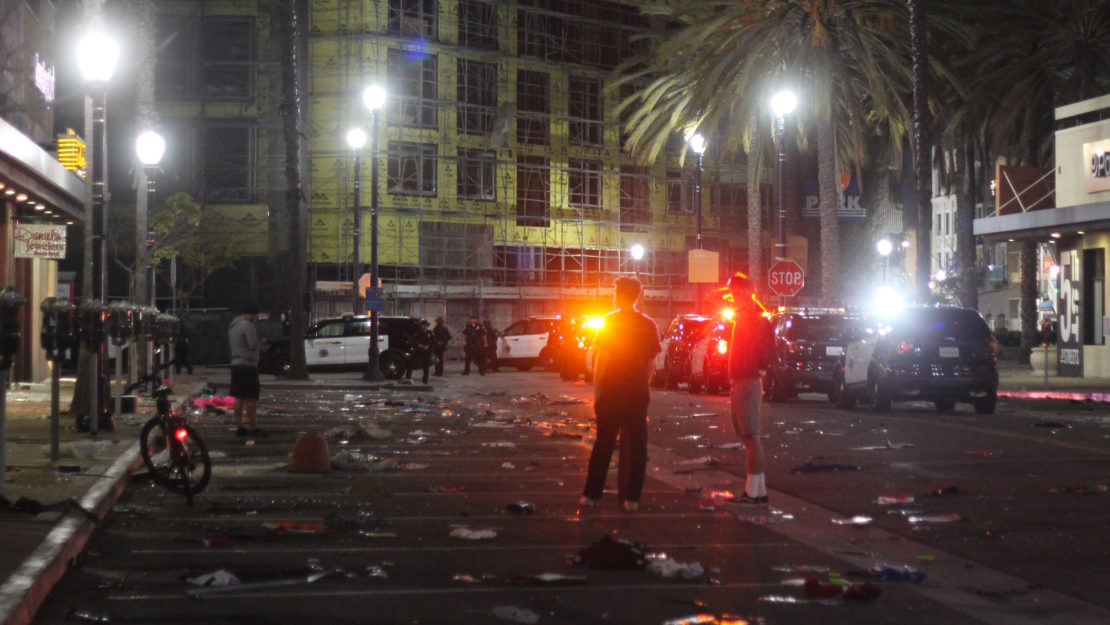 The aftermath of looting on 5th Street at The Streets in Downtown Long Beach, Sunday, May 31, 2020. Photo by Brandon Richardson.

For many, that act of violence by police on a Black person was one such incident too many and protests calling for defunding the police spread all across the US in the spring and summer.

Did the Long Beach Police Department make it through 2020 unscathed? No. The department and its Chief Robert Luna were pretty scathed in 2020, to the point where they merit their own year-end sub-list.

A large group of Long Beach police officers after a training exercise in the Long Beach Convention Center.

The year now is coming to a close without anything approaching a satisfying conclusion. Vaccines have been found, but we’re still heading toward the apex of a bell curve that shows no sign of bending in the right direction.

What 2020 and its virus barred us from doing was practically everything fun, from Disneyland and other amusement parks, movie theaters and concert venues to attending live sporting events including the canceled Acura Grand Prix of Long Beach, and foregoing Easter egg hunts, trick-or-treating, Christmas parades and New Year celebrations. 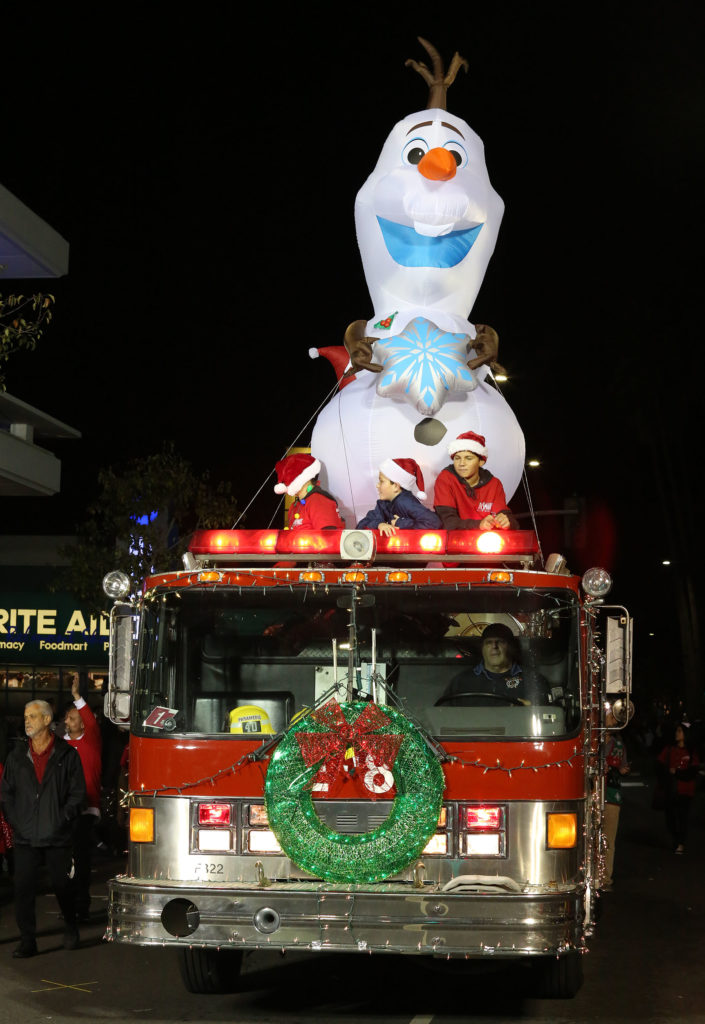 Its Olaf on a firetruck driving down 2nd Street during the 37th Annual Belmont Shore Christmas Parade Saturday, Decemeber 7, 2019 in Long Beach. Photo by Tracey Roman.

Did we cry and complain or did we keep a stiff upper lip? Not invariably did we keep a stiff upper lip. There are many who railed, and continue to rail, against closures and who have turned masks into symbols of subservience and timidity and shouting “If you’re scared stay home!” And they’re a contributing factor in why COVID-19 will be in full if not fuller force as we enter 2021.

But there were those who protected themselves and others, who canceled holidays with friends and family and who anxiously looked forward to a vaccine while others see the vaccines as yet another Deep State plot.

If we can turn things around in 2021 to any real degree and cautiously move back into the direction of normalcy, even if it’s a still-perilous post-COVID normalcy, it will be the people who respected and feared the virus by following the advice of health officials who will be remembered years from now as being among those who, through self-denial and sometimes heartbreaking sacrifice, fought the virus and won.